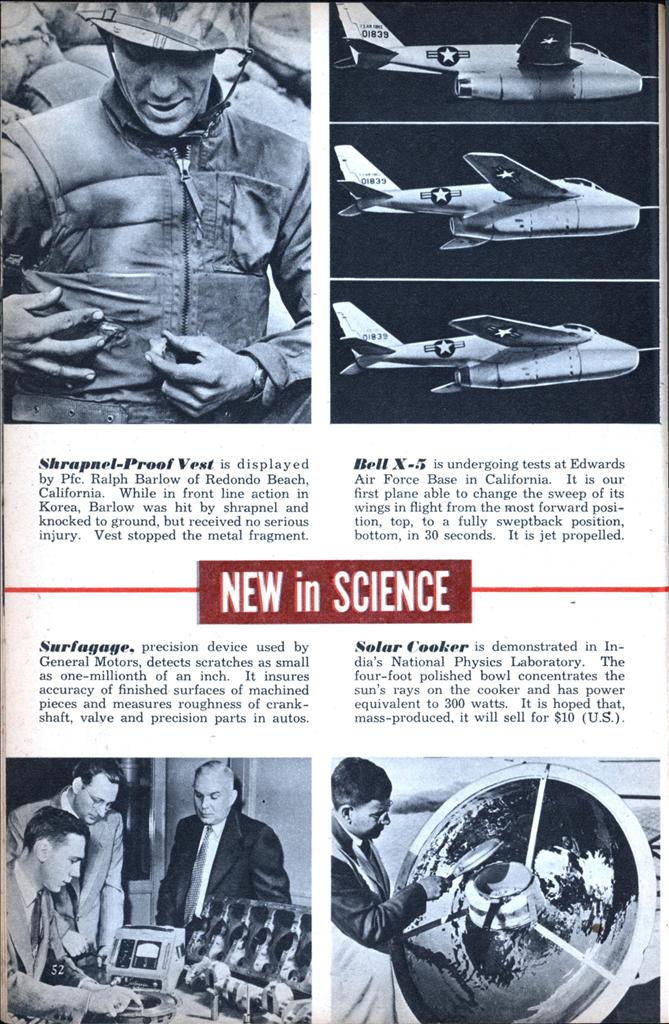 Sharpnel-Proof Vest is displayed by Pfc. Ralph Barlow of Redondo Beach, California. While in front line action in Korea, Barlow was hit by shrapnel and knocked to ground, but received no serious injury. Vest stopped the metal fragment.

Bell X-5 is undergoing tests at Edwards Air Force Base in California. It is our first plane able to change the sweep of its wings in flight from the most forward position, top, to a fully sweptback position, bottom, in 30 seconds. It is jet propelled.

Surfagage, precision device used by General Motors, detects scratches as small as one-millionth of an inch. It insures accuracy of finished surfaces of machined pieces and measures roughness of crankshaft, valve and precision parts in autos.

Solar Cooker is demonstrated in India’s National Physics Laboratory. The four-foot polished bowl concentrates the sun’s rays on the cooker and has power equivalent to 300 watts. It is hoped that, mass-produced, it will sell for $10 (U.S.).

Dummy Men will test new parachutes for the G.Q. Parachute Co., England, in the future. Made of steel and covered with rubberized foam, they weigh 182 lbs. and reproduce the behavior of a human body when dropped from high-altitude planes.

Bodygraph gives accurate measurements for tailoring. Felt vests of known dimensions are smoothed into place and have seams joined by photographic elastic bands. Form is registered when seams distend according to shape. D’Angelo, Paris, France.

Lubrication Platform for autos operates like a seesaw. It has a capacity of 1-1/2 tons and is adjustable for cars with wide tread. There is a clearance of four feet when one end is down. Made by Kurt George of Kasel, Germany, and sells for about $90.

Multimonica a novelty instrument, has two keyboards consisting of 41 keys each. With one it can be operated like any organ; with the other it produces tones electronically. It also has a built-in radio.

Shown at Fair in Frankfurt, Germany.