Sadly, the University of Chicago no longer offers a B.S. in Monkey Railroad Engineering. 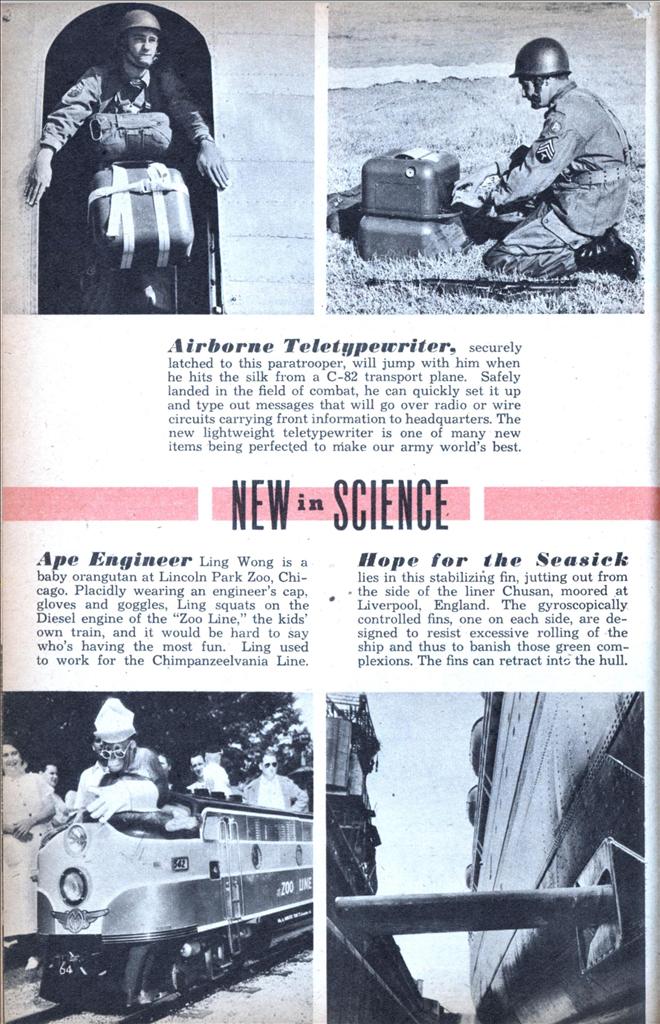 Airborne Teletypewriter, securely latched to this paratrooper, will jump with him when he hits the silk from a C-82 transport plane. Safely landed in the field of combat, he can quickly set it up and type out messages that will go over radio or wire circuits carrying front information to headquarters. The new lightweight teletypewriter is one of many new items being perfected to make our army world’s best.

Ape Engineer Ling Wong is a baby orangutan at Lincoln Park Zoo, Chicago. Placidly wearing an engineer’s cap, gloves and goggles, Ling squats on the Diesel engine of the “Zoo Line,” the kids’ own train, and it would be hard to say who’s having the most fun. Ling used to work for the Chimpanzeelvania Line.

Hope for the Seasick lies in this stabilizing fin, jutting out from – the side of the liner Chusan, moored at Liverpool, England. The gyroscopically controlled fins, one on each side, are designed to resist excessive rolling of the ship and thus to banish those green complexions. The fins can retract into the hull.

Jumbo Sambo chugs along at a lively 27 mph. as he gives these lucky kids a ride. The realistic robot elephant is 8 ft. tall, 12 ft. long and is made from 9000 different parts. Without his toughened paper “hide” he reveals a big steel frame and connecting rods that link the 10-hp. engine to the rubber-wheel feet. The inventor, Frank Stuart of Thaxted, England, says parks in the U.S. may soon purchase copies of his pet.

Tiny Transceiver is an experimental radio set that transmits and receives messages within 200 yds., weighs only 11 ounces and fits into a king-sized cigarette pack. It’s complete, including power supply, and features up-to-date plug-in units that can be replaced if any of the parts fail, facilitating repairs.

Pattern of Sound Waves photographed by a new technique, is here shown by F. K. Harvey, a Bell Laboratory scientist. The visual wave pattern is produced by a scanning process similar to that used in television. A 110-volt neon tube supplies the light. Here Harvey demonstrates the focusing effect of a “sound lens.”