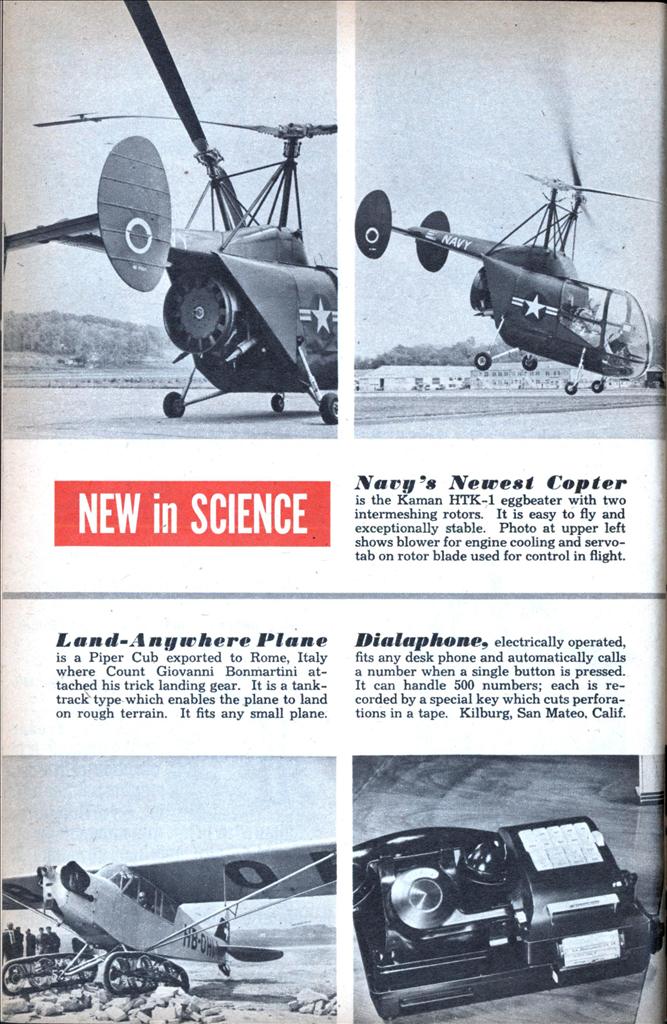 Navy’s Newest Copter is the Kaman HTK-1 eggbeater with two intermeshing rotors. It is easy to fly and exceptionally stable. Photo at upper left shows blower for engine cooling and servo-tab on rotor blade used for control in flight.

Land-Anywhere Plane is a Piper Cub exported to Rome, Italy where Count Giovanni Bonmartini attached his trick landing gear. It is a tank-track type which enables the plane to land on rough terrain. It fits any small plane.

Dialaphone, electrically operated, fits any desk phone and automatically calls a number when a single button is pressed. It can handle 500 numbers; each is recorded by a special key which cuts perforations in a tape. Kilburg, San Mateo. Calif.

Boom Firefighter for London Airport is a truck carrying 6,000 lbs. of liquid carbon dioxide and foam. Two nozzles are on movable booms. Middle fireman in top photo carries a skin piercer used to thrust into fuselage of a burning plane.

Electric Helmsman developed by GE enables a captain to steer his ship by remote control from practically any spot on board. It is strapped to the chest and plugged into special outlets of the steering control system. Navy is testing it.

Tailless Lion. 300-lb. Jimmy, got into a fight with a roommate and had to have his hind-piece bobbed. Dr. Milton Coane of Trenton, New Jersey is the surgeon. Jimmy’s snooze doubtless is due to an influence stronger than the warm sun.

Inside Jobs are the specialty of a new medical camera designed to photograph interior parts of body cavities such as eye, ear, nose, throat and mouth. It is demonstrated by Capt. Harry White, Research Photographer at Randolph Field.