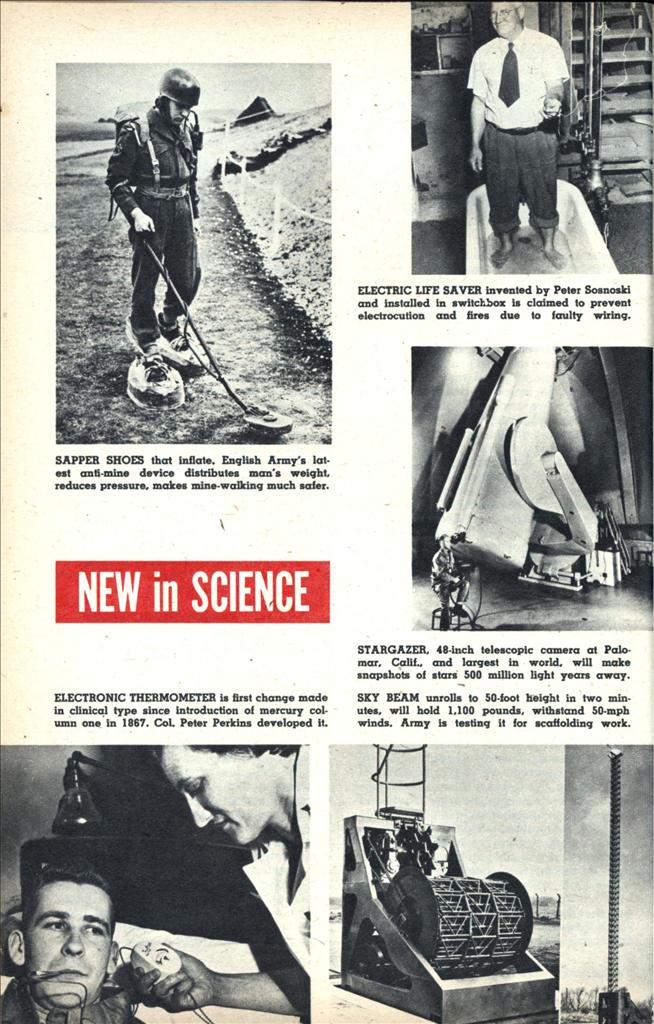 ELECTRONIC THERMOMETER is first change made in clinical type since introduction of mercury column one in 1867. Col. Peter Perkins developed it.

ELECTRIC LIFE SAVER invented by Peter Sosnoski and installed in switchbox is claimed to prevent electrocution and fires due to faulty wiring.

STARGAZER, 48-inch telescopic camera at Palomar. Calif., and largest in world, will make snapshots of stars 500 million light years away.

BOTTOM’S UP and out of water on Navy’s experimental hydrofoil craft. Metal lift foils give higher speeds at same hp than boats without them.

CHIPPED CHOPPERS are prevented by mouthpiece designed by Kansas City, Mo., dentists and used by 110 gridders last fall without one casualty.

SUPER WHALE is German model of boat to be either jet or propeller driven. Kingsize edition could carry 1,500 passengers across ocean in 50 hours.

MECHANICAL EAR is electronic listening device which detects flaws and cracks in rails. It was shown at a Railway Equipment Show in London.

LION RIFLE is “lion” in name alone since it is only .22 caliber. It was one of 10.000 items at New York Import Show and is a Finnish weapon.