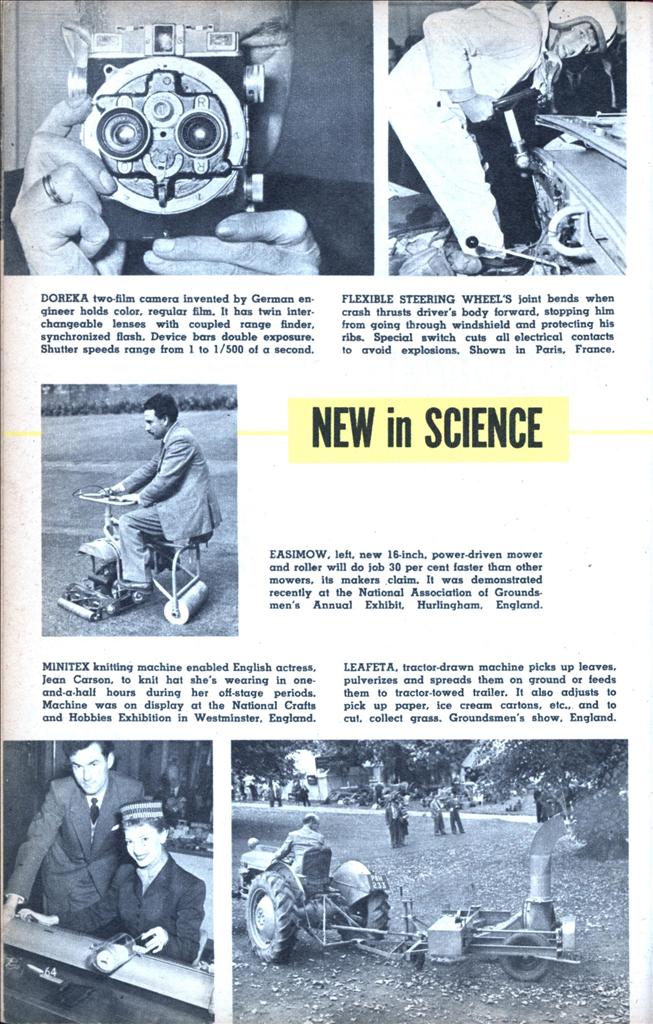 EASIMOW, left, new 16-inch, power-driven mower and roller will do job 30 per cent faster than other mowers, its makers claim. It was demonstrated recently at the National Association of Groundsmen’s Annual Exhibit. Hurlingham, England.

LEAFETA, tractor-drawn machine picks up leaves, pulverizes and spreads them on ground or feeds them to tractor-towed trailer. It also adjusts to pick up paper, ice cream cartons, etc., and to cut. collect grass. Groundsmen’s show. England.

SKY TRUCK helicopter model with platform for cargo can lift weiqht equal to its own with new pressure-jet propulsion eliminating rotor-jet combustion. Engine, cockpit, etc.. are in superstructure. Bensen Aircraft. N. C„ will build it.

ELECTRONIC CAMERA for blind, right, has four-inch lens which picks out objects directly in front of it. Wired cord carries impulses to plastic plate next to skin, warns of danger. Run by dry battery. Shown at Paris Inventor’s Exposition.

AERIAL ADVERTISING plane made by trio of Cleveland, Ohio, GI’s. took three years to make. Beneath wings it has 45-foot span sign containing 800 bulbs. Inventors hope to do after-dark extension of smoke writing, sell space at $400 an hour.

‘OLE IN ONE. new gadget becoming popular on the links of Merry England, picks up and stores up to 20 balls. Slight pressure causes rubber grip at end of plastic tube to inhale balls. Golfer releases lever under hand when he needs one.