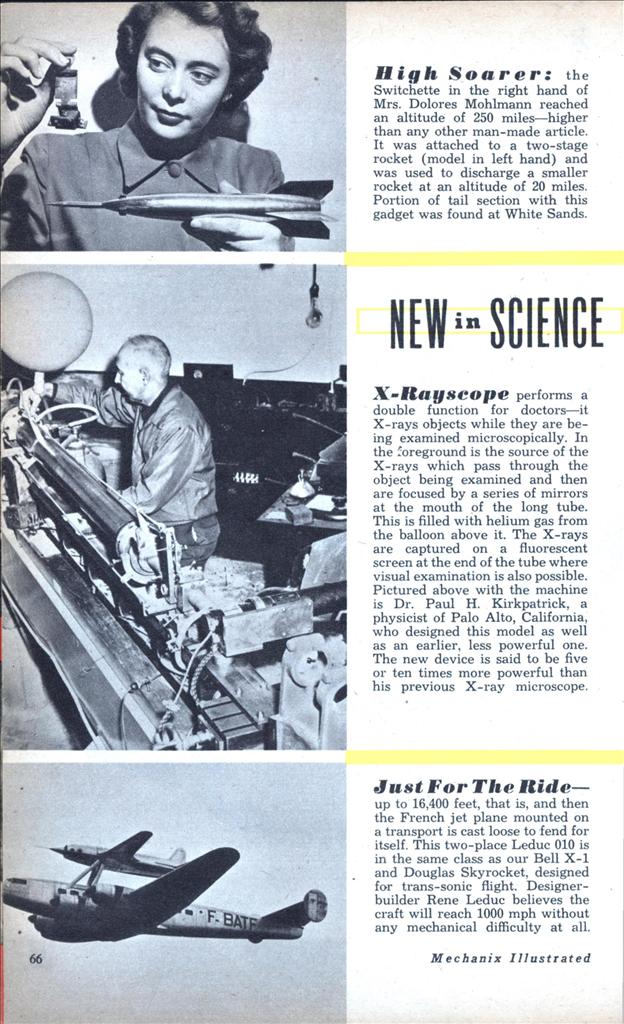 X-Rayscope performs a double function for doctors—it X-rays objects while they are being examined microscopically. In the foreground is the source of the X-rays which pass through the object being examined and then are focused by a series of mirrors at the mouth of the long tube. This is filled with helium gas from the balloon above it. The X-rays are captured on a fluorescent screen at the end of the tube where visual examination is also possible. Pictured above with the machine is Dr. Paul H. Kirkpatrick, a physicist of Palo Alto, California, who designed this model as well as an earlier, less powerful one. The new device is said to be five or ten times more powerful than his previous X-ray microscope.

Just For The Ride- up to 16,400 feet, that is, and then the French jet plane mounted on a transport is cast loose to fend for itself. This two-place Leduc 010 is in the same class as our Bell X-1 and Douglas Skyrocket, designed for trans-sonic flight. Designer-builder Rene Leduc believes the craft will reach 1000 mph without any mechanical difficulty at all.

Baby S-O-S: this miniature radio transmitter-receiver will soon be playing its part in the rescue of airmen downed at sea. The midget battery unit can be slipped into a flying suit and will replace the cumbersome 40-pound Gibson Girl equipment now in use. Called URC-4, it was developed at the Wright Field laboratories of the Air Force Materiel Command.

Midget Typewriter has a keyboard that moves like a carriage and a roller which remains stationary instead of the reverse as in regular-sized machines. Olaf and Joachim Zeuzem, two brothers in Frankfort, Germany, developed the pint-sized typewriter and hope to start production soon. Size of whole machine is smaller than old keyboard.

Tin-Can Engineer W.E. Chester has spent the past 25 years of his life making scale models of steam engines from old, discarded tin cans. This 86-year-old hobbyist is a retired railroad man who lives in Atlanta, Georgia, and tries to keep up with all the latest railroading innovations. Here he’s in his own backyard tinkering with a recent model.

Rescue Knife will give air-crash victims a better chance for survival. It’s an eight-foot, razor-edged steel spearhead mounted on an armored-car chassis, designed to cut through aircraft wreckage quickly. Engineers of the Melbourne (Australia) Dept. of Works designed it. Far right, the knife enters plane at 12 mph and, right, cuts through.