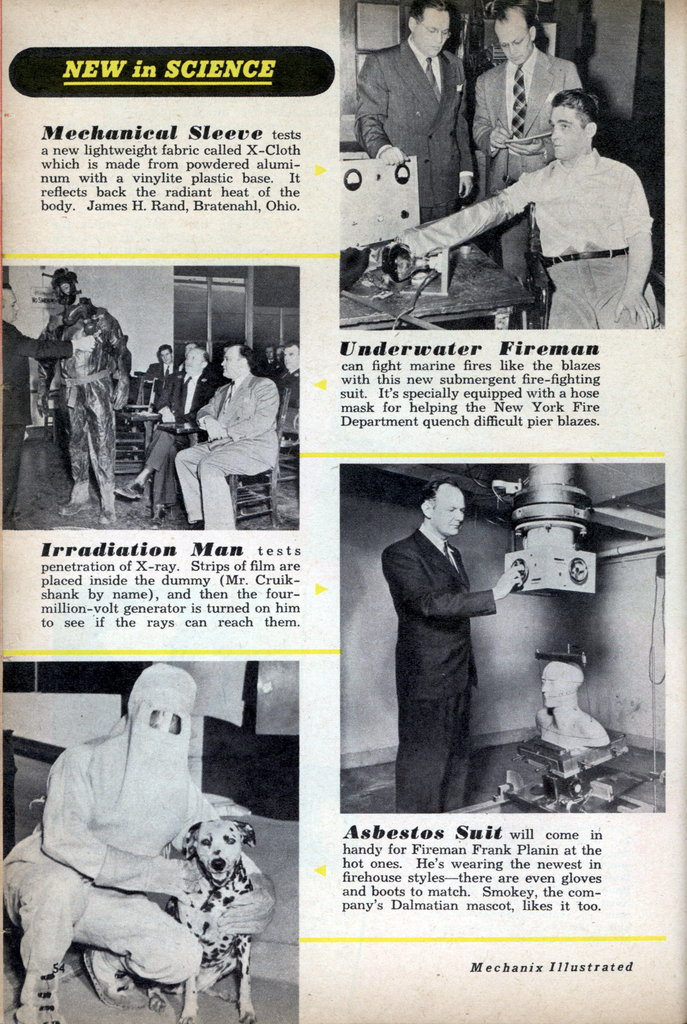 Mechanical Sleeve tests a new lightweight fabric called X-Cloth which is made from powdered aluminum with a vinylite plastic base. It reflects back the radiant heat of the body. James H. Rand, Bratenahl, Ohio.

Irradiation Man tests penetration of X-ray. Strips of film are placed inside the dummy (Mr. Cruik-shank by name), and then the four-million-volt generator is turned on him to see if the rays can reach them.

Asbestos Suit will come in handy for Fireman Frank Planin at the hot ones. He’s wearing the newest in firehouse stylesâ€”there are even gloves and boots to match. Smokey, the company’s Dalmatian mascot, likes it too.

Eye Magnet is a machine for removing particles of foreign matter from the eye. It’ll probably never replace the corner of a clean handkerchief for the man in the street. T. Hamblin, 51 Wigmore St., West London, Eng.

Plastic Lung is a portable respirator for polio sufferers. It weighs about a pound and takes only 30 seconds to put on. Its makers hope it may eventually replace the cumbersome and more expensive iron lungs now in use.

Fingertip Sermon is given by George E. Speake at a Christian Endeavor convention. One million volts arc from his body through electrodes on his fingertips. Sparks really fly when he mounts the pulpit!

Lady In A Smog takes a blink test as part of a Western Oil and Gas Association project to trace down the stuff. Photoelectric cells on goggles record eye irritation caused by measured amount of smog in plastic helmet.