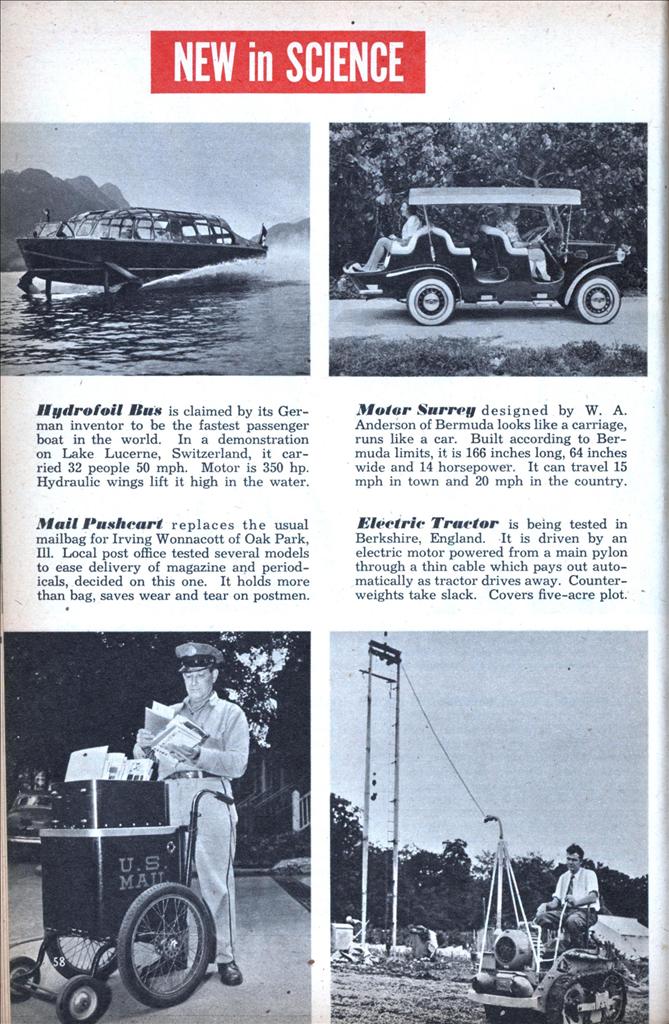 Hydrofoil Bus is claimed by its German inventor to be the fastest passenger boat in the world. In a demonstration on Lake Lucerne, Switzerland, it carried 32 people 50 mph. Motor is 350 hp. Hydraulic wings lift it high in the water.

Mail Pushcart replaces the usual mailbag for Irving Wonnacott of Oak Park, Ill. Local post office tested several models to ease delivery of magazine and periodicals, decided on this one. It holds more than bag, saves wear and tear on postmen.

Motor Surrey designed by W.A. Anderson of Bermuda looks like a carriage, runs like a car. Built according to Bermuda limits, it is 166 inches long, 64 inches wide and 14 horsepower. It can travel 15 mph in town and 20 mph in the country.

Electric Tractor is being tested in Berkshire, England. It is driven by an electric motor powered from a main pylon through a thin cable which pays out automatically as tractor drives away. Counterweights take slack. Covers five-acre plot.

Poeket-Size Recorder shown in Frankfurt, Germany, is wire type 6-1/2 x 1 x 4 inches and weighing two pounds. It records two and one-half hours on two small batteries or can be plugged into wall outlet. Mike is hidden behind watch. Price: $162.

Shark Shocker invented by Henry Burkey is designed to protect shipwreck victims against sharks and other carnivorous fish, not against pretty models such as Virginia Hopkins shown here demonstrating it. Device emits powerful electrical jolt.

Sideways Trombone was invented by David Shuman of Brooklyn, faculty member of Julliard School of Music. It enables boys to study the instrument at an early age by shortening the arm movement. Also prevents accidents to persons in front.

TV Tester designed by RCA will tell you whether your district can pick up the nearest programs and what type antenna will be needed. Tower on truck can be raised to height of 70 feet, tunes in receiver to determine if signals will be satisfactory.