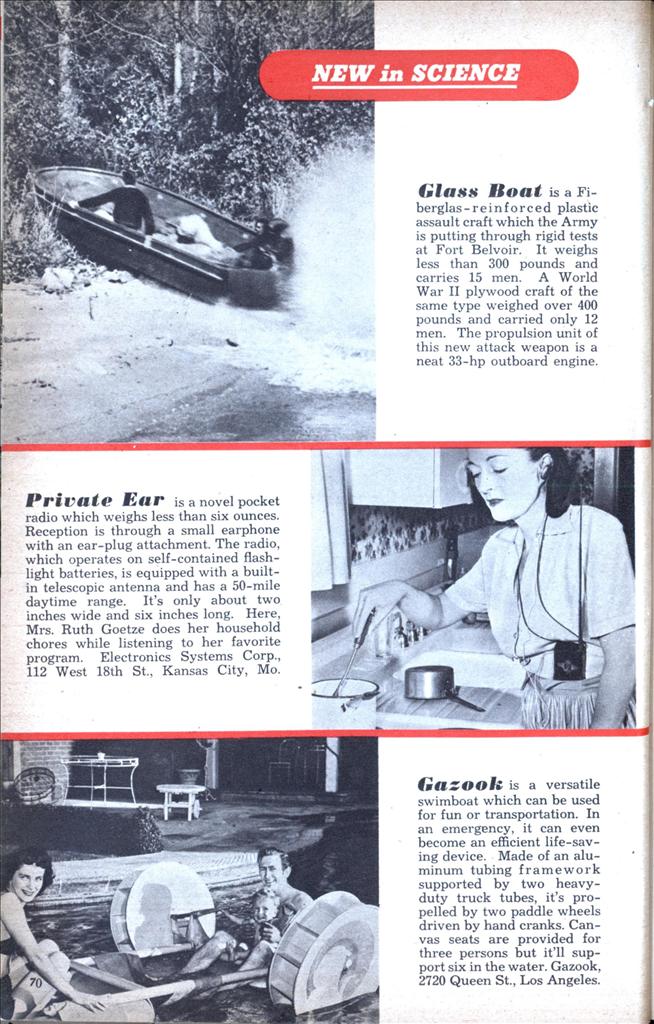 Glass Boat is a Fiberglas-reinforced plastic assault craft which the Army is putting through rigid tests at Fort Belvoir. It weighs less than 300 pounds and carries 15 men. A World War II plywood craft of the same type weighed over 400 pounds and carried only 12 men. The propulsion unit of this new attack weapon is a neat 33-hp outboard engine.

Private Ear is a novel pocket radio which weighs less than six ounces. Reception is through a small earphone with an ear-plug attachment. The radio, which operates on self-contained flashlight batteries, is equipped with a built-in telescopic antenna and has a 50-mile daytime range. It’s only about two inches wide and six inches long. Here, Mrs. Ruth Goetze does her household chores while listening to her favorite program. Electronics Systems Corp., 112 West 18th St., Kansas City, Mo.

Gazook is a versatile swimboat which can be used for fun or transportation. In an emergency, it can even become an efficient life-saving device. Made of an aluminum tubing framework supported by two heavy-duty truck tubes, it’s propelled by two paddle wheels driven by hand cranks. Canvas seats are provided for three persons but it’ll support six in the water. Gazook, 2720 Queen St., Los Angeles.