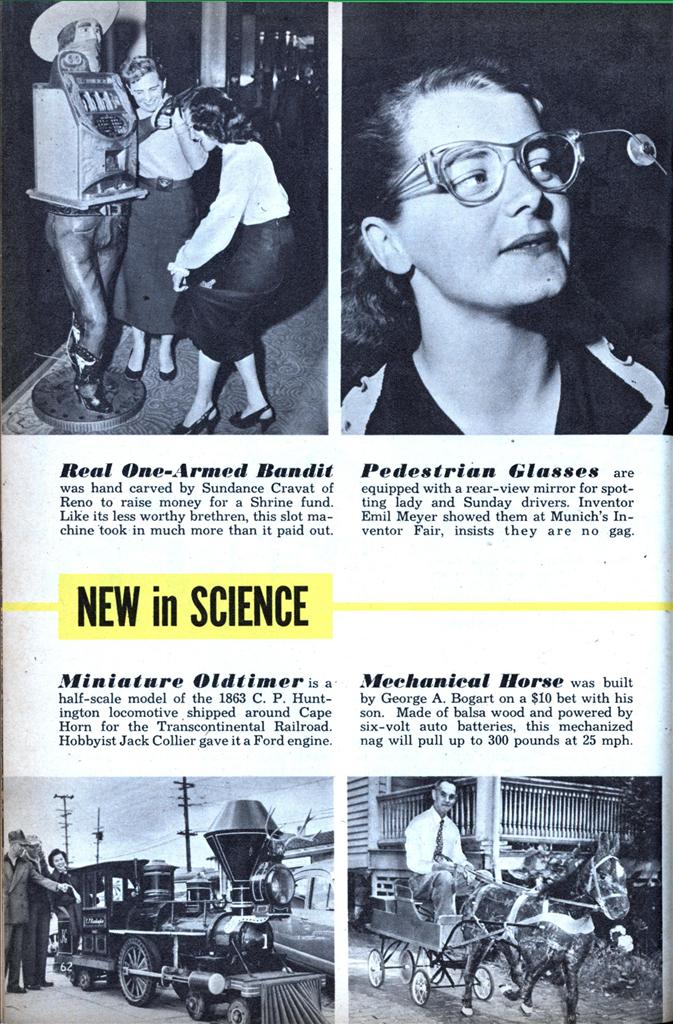 Real One-Armed Bandit was hand carved by Sundance Cravat of Reno to raise money for a Shrine fund. Like its less worthy brethren, this slot machine took in much more than it paid out.

Pedestrian Glasses are equipped with a rear-view mirror for spotting lady and Sunday drivers. Inventor Emil Meyer showed them at Munich’s Inventor Fair, insists they are no gag.

Miniature Oldtime is a half-scale model of the 1863 C. P. Huntington locomotive shipped around Cape Horn for the Transcontinental Railroad. Hobbyist Jack Collier gave it a Ford engine.

Mechanical Horse was built by George A. Bogart on a $10 bet with his son. Made of balsa wood and powered by six-volt auto batteries, this mechanized nag will pull up to 300 pounds at 25 mph.

Agricultural Warfare is being conducted by the British with everything from the streamlined, automatic tractor-type hop sprayer, top, to the strictly non-streamlined donkey spray rig, above.

Motorless Motorboat is built like a regular racer but it’s driven by a pedal crank powered by the feet of both passengers. It’s very popular with water fans at Starnsberg Lake, Germany.

Human Bird3 a non-com in the French Air Force, plans to soar at 10,000 feet over Italy wearing only plywood wings and webbed trousers. He hopes to be more successful than his predecessors.

Underwaterscope may be used to hunt treasures in Lake Erie. Inventor Peter McLean claims he can see 60 feet in any direction from the end. Tube is equipped with a 3,000-watt light, mirrors.