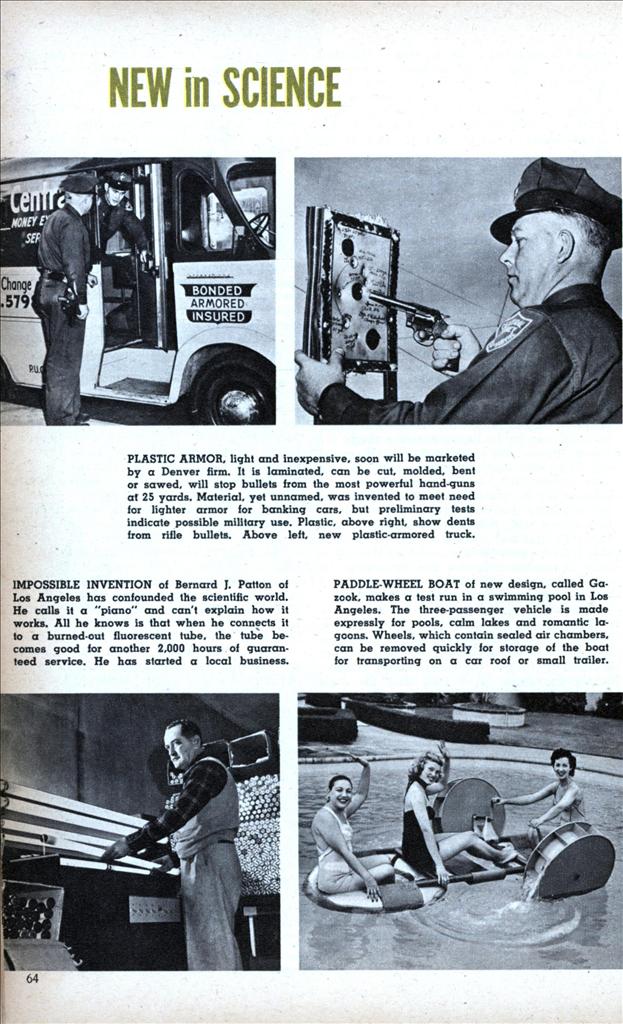 PLASTIC ARMOR, light and inexpensive, soon will be marketed by a Denver firm. It is laminated, can be cut, molded, bent or sawed, will stop bullets from the most powerful hand-guns at 25 yards. Material, yet unnamed, was invented to meet need for lighter armor for banking cars, but preliminary tests indicate possible military use. Plastic, above right, show dents from rifle bullets. Above left, new plastic-armored truck.

IMPOSSIBLE INVENTION of Bernard J. Patton of Los Angeles has confounded the scientific world. He calls it a “piano” and can’t explain how it works. All he knows is that when he connects it to a burned-out fluorescent tube, the tube becomes good for another 2,000 hours of guaranteed service. He has started a local business.

PADDLE-WHEEL BOAT of new design, called Gazook, makes a test run in a swimming pool in Los Angeles. The three-passenger vehicle is made expressly for pools, calm lakes and romantic lagoons. Wheels, which contain sealed air chambers, can be removed quickly for storage of the boat for transporting on a car roof or small trailer.

SECRET WEAPON? No, only a new three-ton camera being constructed in West Berlin to photograph the sky. It is the first made in Germany since World War II, will be used by Bonn University. Scientists say it will take photos of stars up to the 23rd class. The human eye can see stars up to the 6th class. Instrument costs $20,000.

NO MODEL RAILROAD layout, as a quick glance at the photo suggests, but the complex wiring mechanism of aiming device on a new anti-aircraft weapon called Skysweeper, designed to cope with enemy guided missiles, supersonic aircraft. A woman technician is checking the intricate hookup at General Motors AC Spark Plug Plant in Flint.

PHOTO MAP of area around Philadelphia. Penna., is about 33×45 ft., large enough to cover the side of an average two-story house. Each section was made from dozens of aerial photos carefully assembled into a photo-mosaic, then rephotographed. Work maps for Philadelphia Electric Co. were traced from it. Map includes 2,340 square miles.

GLASSES FOR BLIND help ten-year-old boy from Patterson, N. J., who has only ten per cent vision to read fine print on card. New clear-image, high-resolution lenses will aid about half of 150,000 near-blind people in U. S. according to New York State Optometric Assoc. Each glass is combination of lenses set one-eighth inch apart.