Remember folks, nothing is more scientific than a birdhouse. Except maybe a shoe. 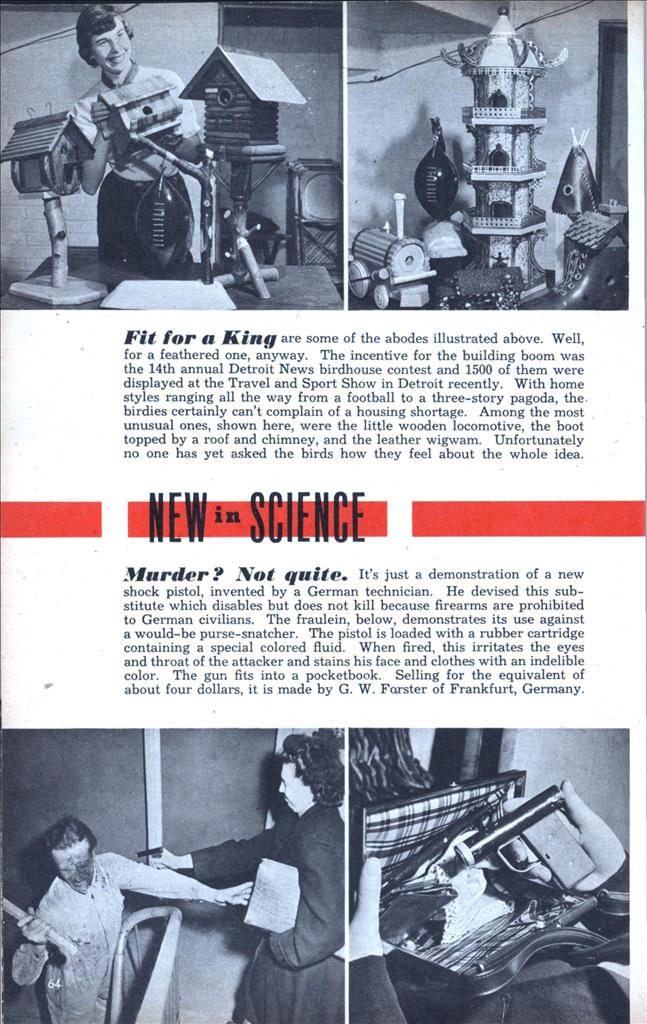 Fit for King are some of the abodes illustrated above. Well, for a feathered one, anyway. The incentive for the building boom was the 14th annual Detroit News birdhouse contest and 1500 of them were displayed at the Travel and Sport Show in Detroit recently. With home styles ranging all the way from a football to a three-story pagoda, the birdies certainly can’t complain of a housing shortage. Among the most unusual ones, shown here, were the little wooden locomotive, the boot topped by a roof and chimney, and the leather wigwam. Unfortunately no one has yet asked the birds how they feel about the whole idea.

Murder? Not quite. It’s just a demonstration of a new shock pistol, invented by a German technician. He devised this substitute which disables but does not kill because firearms are prohibited to German civilians. The fraulein, below, demonstrates its use against a would-be purse-snatcher. The pistol is loaded with a rubber cartridge containing a special colored fluid. When fired, this irritates the eyes and throat of the attacker and stains his face and clothes with an indelible color. The gun fits into a pocketbook. Selling for the equivalent of about four dollars, it is made by G. W. Forster of Frankfurt, Germany.

Strap Your Uppers for variety’s sake. That’s what a German gadgeteer would like you to do, anyway. He has developed a leather sole which can be attached with a zip fastener to different upper-shoe halves to match milady’s dress of the day. First shown at the German spring trade fair in Frankfurt, they are now being built by the Multi-Look Company of Einbeck, Germany, for fall sale.

New Atom Smasher known as a non-ferromagnetic synchrotron, is being built by General Electric and the Office of Naval Research to study the effects of high-energy radiation, particularly in nuclear research. The machine has already been operated in its first phase, up to about a million volts. Ultimately it is expected to produce X-rays of 300,000,000 volts. It is being built in Niskayuna, N. Y.

Baby Locomotive is pet project of Romelo Leon of South Pasadena, Calif. Employed as a master mechanic, he spends his leisure hours in his home machine shop where he produced this one-sixth size model of an actual Daylight Streamliner. It burns Diesel fuel and builds up its own live steam to a boiler pressure of 125 pounds. Taking five years to construct, it is three feet high, 16 feet long.

Quonset Hut is pneumatic and is expected to become a dream house for stranded airmen in the Arctic. Developed jointly by the Government and the U. S. Rubber Company, it has no internal braces and can be supported by as little as a pound and a half of air pressure, supplied by hand pumps. The inch-thick, two-layer cotton fabric, coated with a compound, is waterproof. The hut withstands 100-mph gales.