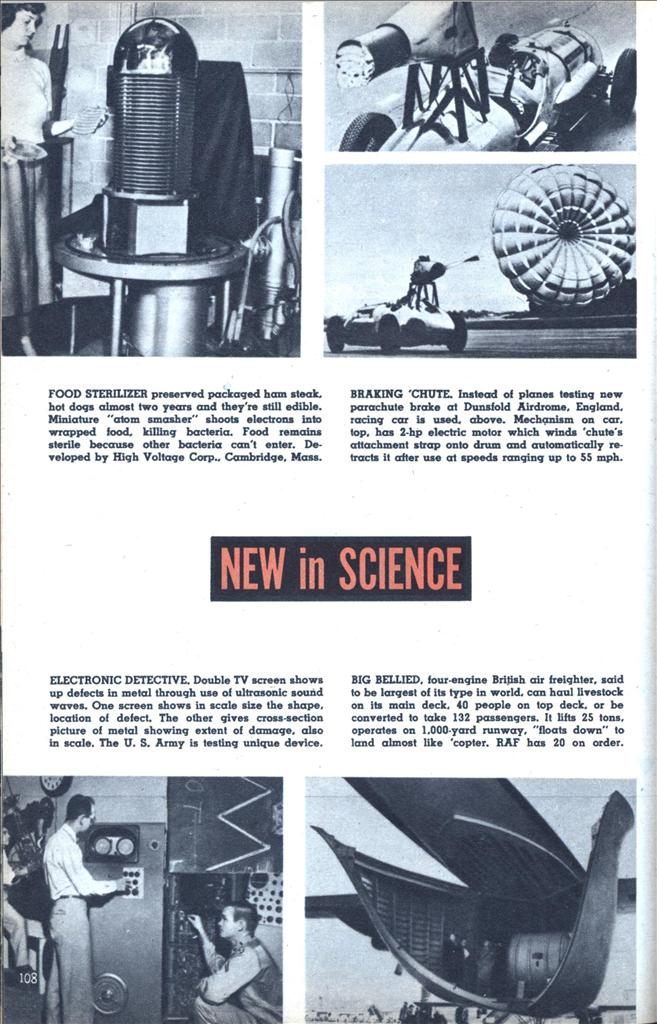 ELECTRONIC DETECTIVE. Double TV screen shows up defects in metal through use of ultrasonic sound wares. One screen shows in scale size the shape, location of defect. The other gives cross-section picture of metal showing extent of damage, also in scale. The U. S. Army is testing unique device.

BRAKING ‘CHUTE. Instead of planes testing new parachute brake at Dunsfold Airdrome. England, racing car is used, above. Mechanism on car. top. has 2-hp electric motor which winds ‘chute’s attachment strap onto drum and automatically retracts it after use at speeds ranging up to 55 mph.

BIG BELLIED, four-engine British air freighter, said to be largest of its type in world, can haul livestock on its main deck, 40 people on top deck, or be converted to take 132 passengers. It lifts 25 tons, operates on 1.000-yard runway, “floats down” to land almost like ‘copter. RAF has 20 on order.

GASCOPE for detecting leaks incorporates two separate principles of combustible gas detection. It can analyze accurately complete range of gas concentrations, above and below explosive limits, and pinpoint all underground leaks. Made by Mine Safety Appliances Co.. Pittsburgh. Penna.

CLASSY ‘N FAST is this streamlined model speedboat which has travelled at over 70 mph. Craft holds the European record in its division. 10 cc’s. It was displayed recently at an exhibition by the Model Yacht Club of Paris. Midget speedster was designed and constructed by Frenchman A. Cartier.

JUNIOR DRIVERS at the Norclay Elementary School. North Kansas City, Mo., which is limited to first graders, take their new safety driving lessons seriously. They pedal small autos that have lights, horns, brakes and toy motors with real spark plugs on their playground driving course. But before they can drive cars, kids receive classroom instruction in traffic fundamentals.

ULTRASONIC DRILL with which preliminary studies on cavity preparation have been made at Columbia University’s School of Dental and Oral Surgery, is demonstrated by Dr. Carl Oman on a tooth. Device, an adaption of industrial cutters, may be the answer to search for painless drilling.