Wow, those are some phallic looking toy rockets. 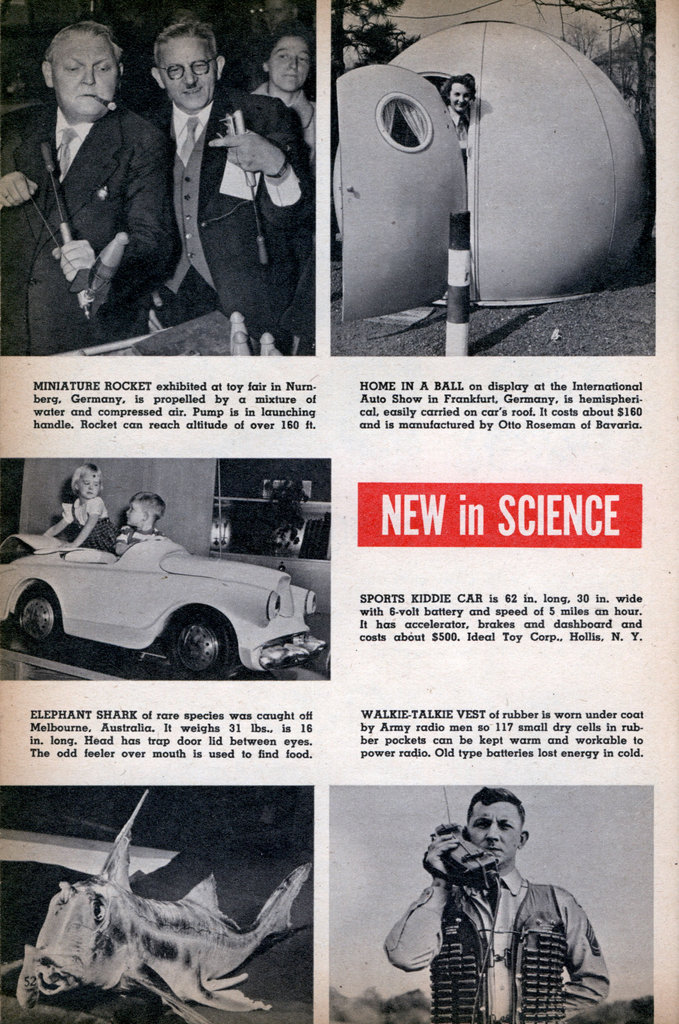 MINIATURE ROCKET exhibited at toy fair in Nurnberg, Germany, is propelled by a mixture of water and compressed air. Pump is in launching handle. Rocket can reach altitude of oyer 160 it.

HOME IN A BALL on display at the International Auto Show in Frankfurt, Germany, is hemispherical, easily carried on car’s roof. It costs about $160 and is manufactured by Otto Roseman of Bavaria.

ELEPHANT SHARK of rare species was caught off Melbourne, Australia. It weighs 31 lbs., is 16 in. long. Head has trap door lid between eyes. The odd feeler over mouth is used to find food.

WALKIE-TALKIE VEST of rubber is worn under coat by Army radio men so 117 small dry cells in rubber pockets can be kept warm and workable to power radio. Old type batteries lost energy in cold.

ROCKET TO MARS model, far left, developed by Professor von Braun of Frankfurt, Germany, has 3 2-ft. spherical cabin on top. Fuel tanks below drop off during flight which would take about two years. Pilot’s cabin at right

WATER WINGS raise streamlined racer above the surface when it attains sufficient speed. Small wing-like attachments beneath hull give it lift. Boat has 55-hp Porsche engine, speed of 62 mph.

ROLLIGON TIRES on Navy jeep roll over inventor Bill Albee. They are watermelon shaped, have low-pressure of 1-1/2 to 5 lbs. per sq. in. and are 4-1/2 ft. in diameter. They’re made by Goodyear.

FEATHERWEIGHT MACHINE GUN invented by Warrant Officer Loren Cook is being tested by Army. It is supposed to shoot farther, straighter and be lighter than M-3, can fire 700 rounds per min.