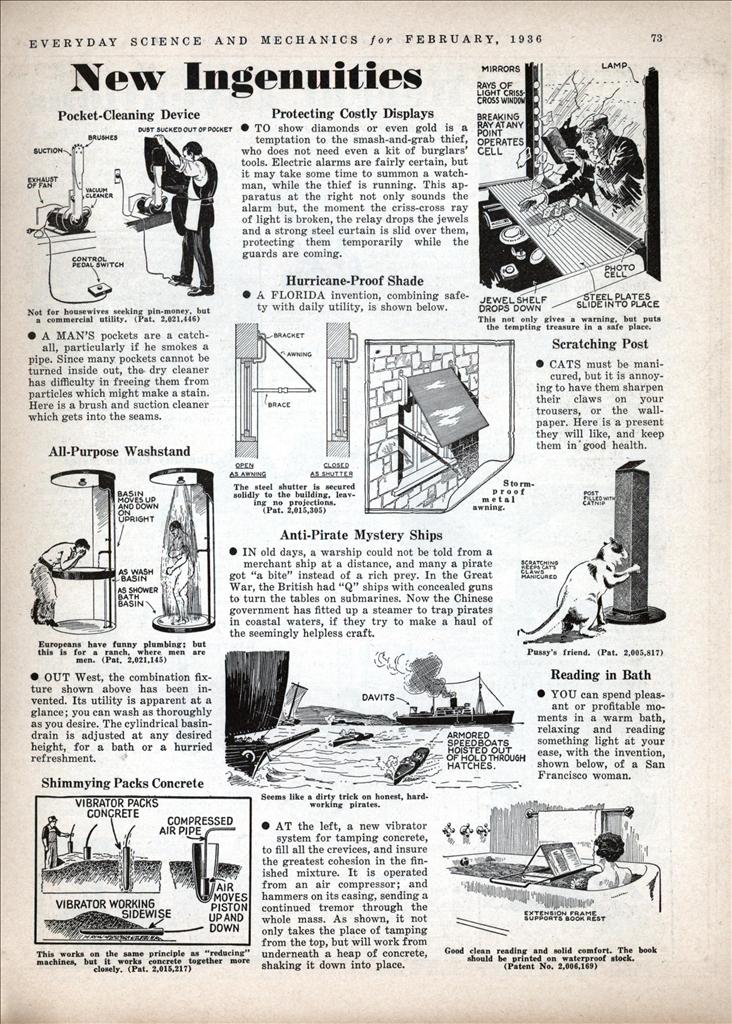 Pocket-Cleaning Device
• A MAN’S pockets are a catchall, particularly if he smokes a pipe. Since many pockets cannot be turned inside out, the dry cleaner has difficulty in freeing them from particles which might make a stain. Here is a brush and suction cleaner which gets into the seams.

All-Purpose Washstand
• OUT West, the combination fixture shown above has been invented. Its utility is apparent at a glance; you can wash as thoroughly as you desire. The cylindrical basin-drain is adjusted at any desired height, for a bath or a hurried refreshment.

Protecting Costly Displays
• TO show diamonds or even gold is a temptation to the smash-and-grab thief, who does not need even a kit of burglars’ tools. Electric alarms are fairly certain, but it may take some time to summon a watchman, while the thief is running. This apparatus at the right not only sounds the alarm but, the moment the criss-cross ray of light is broken, the relay drops the jewels and a strong steel curtain is slid over them, protecting them temporarily while the guards are coming.

Hurricane-Proof Shade
• A FLORIDA invention, combining safety with daily utility, is shown below.

Anti-Pirate Mystery Ships
• IN old days, a warship could not be told from a merchant ship at a distance, and many a pirate got “a bite” instead of a rich prey. In the Great War, the British had “Q” ships with concealed guns to turn the tables on submarines. Now the Chinese government has fitted up a steamer to trap pirates in coastal waters, if they try to make a haul of the seemingly helpless craft.

Scratching Post
• CATS must be manicured, but it is annoying to have them sharpen their claws on your trousers, or the wallpaper. Here is a present they will like, and keep them in good health.

Reading in Bath
• YOU can spend pleasant or profitable moments in a warm bath, relaxing and reading something light at your ease, with the invention, shown below, of a San Francisco woman.