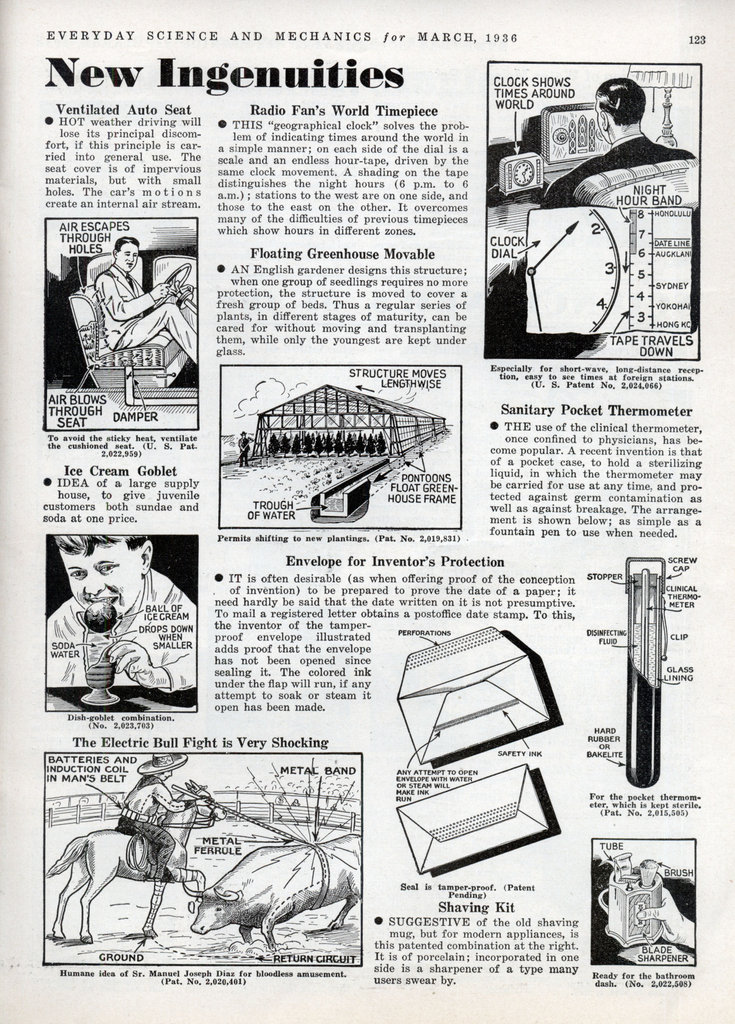 Ventilated Auto Seat
HOT weather driving will lose its principal discomfort, if this principle is carried into general use. The seat cover is of impervious materials, but with small holes. The car’s motions create an internal air stream.

Ice Cream Goblet
IDEA of a large supply house, to give juvenile customers both sundae and soda at one price.

Radio Fan’s World Timepiece
THIS “geographical clock” solves the problem of indicating times around the world in a simple manner; on each side of the dial is a scale and an endless hour-tape, driven by the same clock movement. A shading on the tape distinguishes the night hours (6 p.m. to 6 a.m.) ; stations to the west are on one side, and those to the east on the other. It overcomes many of the difficulties of previous timepieces which show hours in different zones.

Floating Greenhouse Movable
AN English gardener designs this structure; when one group of seedlings requires no more protection, the structure is moved to cover a fresh group of beds. Thus a regular series of plants, in different stages of maturity, can be cared for without moving and transplanting them, while only the youngest are kept under glass.

Envelope for Inventor’s Protection
IT is often desirable (as when offering proof of the conception of invention) to be prepared to prove the date of a paper; it need hardly be said that the date written on it is not presumptive. To mail a registered letter obtains a postoffice date stamp. To this, the inventor of the tamper-proof envelope illustrated adds proof that the envelope has not been opened since sealing it. The colored ink under the flap will run, if any attempt to soak or steam it open has been made.

Sanitary Pocket Thermometer
THE use of the clinical thermometer, once confined to physicians, has become popular. A recent invention is that of a pocket case, to hold a sterilizing liquid, in which the thermometer may be carried for use at any time, and protected against germ contamination as well as against breakage. The arrangement is shown below; as simple as a fountain pen to use when needed.

Shaving Kit
SUGGESTIVE of the old shaving mug, but for modern appliances, is this patented combination at the right. It is of porcelain; incorporated in one side is a sharpener of a type many users swear by.