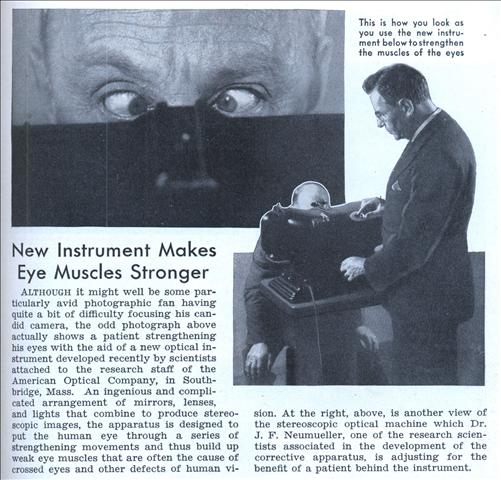 Although it might well be some particularly avid photographic fan having quite a bit of difficulty focusing his candid camera, the odd photograph above actually shows a patient strengthening his eyes with the aid of a new optical instrument developed recently by scientists attached to the research staff of the American Optical Company, in South-bridge, Mass. An ingenious and complicated arrangement of mirrors, lenses, and lights that combine to produce stereoscopic images, the apparatus is designed to put the human eye through a series of strengthening movements and thus build up weak eye muscles that are often the cause of crossed eyes and other defects of human vision. At the right, above, is another view of the stereoscopic optical machine which Dr. J. F. Neumueller, one of the research scientists associated in the development of the corrective apparatus, is adjusting for the benefit of a patient behind the instrument.