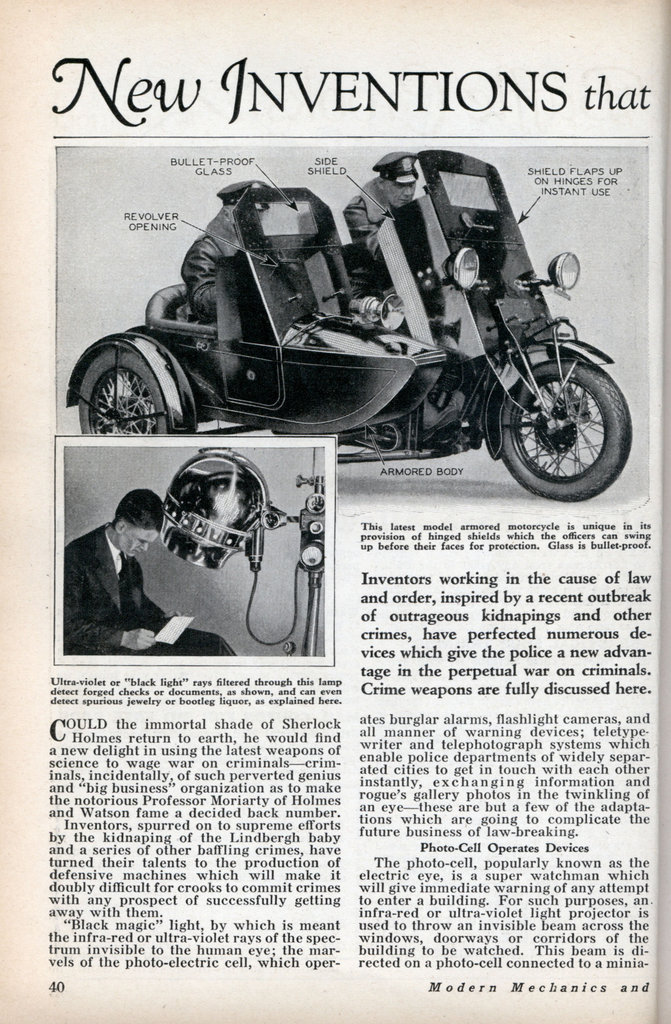 Inventors working in the cause of law and order, inspired by a recent outbreak of outrageous kidnapings and other crimes, have perfected numerous devices which give the police a new advantage in the perpetual war on criminals. Crime weapons are fully discussed here.

COULD the immortal shade of Sherlock Holmes return to earth, he would find a new delight in using the latest weapons of science to wage war on criminalsâ€”criminals, incidentally, of such perverted genius and “big business” organization as to make the notorious Professor Moriarty of Holmes and Watson fame a decided back number.

Inventors, spurred on to supreme efforts by the kidnaping of the Lindbergh baby and a series of other baffling crimes, have turned their talents to the production of defensive machines which will make it doubly difficult for crooks to commit crimes with any prospect of successfully getting away with them.

“Black magic” light, by which is meant the infra-red or ultra-violet rays of the spectrum invisible to the human eye; the marvels of the photo-electric cell, which operates burglar alarms, flashlight cameras, and all manner of warning devices; teletypewriter and telephotograph systems which enable police departments of widely separated cities to get in touch with each other instantly, exchanging information and rogue’s gallery photos in the twinkling of an eyeâ€”these are but a few of the adaptations which are going to complicate the future business of law-breaking.

The photo-cell, popularly known as the electric eye, is a super watchman which will give immediate warning of any attempt to enter a building. For such purposes, an. infra-red or ultra-violet light projector is used to throw an invisible beam across the windows, doorways or corridors of the building to be watched. This beam is directed on a photo-cell connected to a miniature relay, so adjusted that it is held open as long as the beam falls on it.

The moment an intruder intercepts the beam, however, the relay trips, closing a secondary power relay which rings alarm bells, turns on lights throughout the building, or does other things according to the way it is hooked up.

To keep watch over some particular object within a building, such as a child’s crib, if the frustration of kidnapers is the object, the invisible light projector should be mounted rather high up on the wall, with the photo-cell supported on or near the floor so that the rays travel diagonally downward in front of the object to be protected. This makes it practically impossible for an intruder to avoid disturbing the system at some point.

At the same time an alarm system is thrown into action, a relay can be employed to operate a concealed camera capable of taking a picture of the intruder without his being aware of the fact. Film emulsions sensitive to infra-red rays are already available and are being rapidly developed by the photographic companies.

Motion picture cameras operated by photo-cells have been employed to take a single picture of every person passing a certain point. Thus everyone entering a bank vault will intercept a beam of light directed on a photo-cell, and his picture will instantly be recorded on a roll of film. In case of a hold-up, the film is developed and the bandit can be identified by comparison with police pictures.

Another interesting application of photocells is the system whereby a policeman in making his rounds throw’s a beam from a pocket flashlight on a photo-cell inside the shop window, thereby turning on the lights in the store. After making his inspection, he extinguishes the flashlight and the lights are turned off.

A bandit trap which gives warning of a hold-up before it has a chance to occur is the invention of Victor Breitenstein of Chicago. Coils installed on either side of a door or other passageway through which people enter stores, banks, or any building to be protected, sound an alarm and open a camera shutter if the individual passing between them carries a revolver in his pocket. The device is shown in one of the accompanying photos.

In a test, inventor Breitenstein placed a revolver in his hip pocket and passed between the coils. Instantly a buzzer sounded, a red electric light flashed, and a camera took a flashlight photo. Relays could be hooked up to close and lock a bank door automatically. In the case of some person carrying an innocent metal object, such as a hammer, a watchman could stop the suspect, examine him, and permit him to pass if he carried no concealed weapons.

The bandit trap will also be useful in prisons, where persons carrying steel saws in food or other objects can be detected in time to prevent their visiting prisoners. For home protection, the buzzer could warn the housewife if the person ringing the doorbell carried a gun. Dishonest employes carrying metal objects out of a factory or store likewise could be detected by the machine.

One new method of running down the criminal which has been operated with little publicity because of the inherent necessity for secrecy to checkmate the master crook’s cunning, has been the telephoto system.

Telegraph and telephone companies maintain this type of service for police departments in all the big cities of the country. A visit to the telephotograph room of the American Telephone & Telegraph Company at 15 Dey St., New York City, reveals the amazing efficiency of this new scientific aid for the police in their war on crime.

Within an hour and a half every police department in the country is enabled to be in possession of the photograph, fingerprints and rogues’ gallery record in general of any person sought in connection with a crime. If the person does not happen to have a criminal record, his photograph and other data can be telephotoed instantaneously.

This system is able to broadcast the crim-inals photo and his Bertillon record before he reaches any destination outside the jurisdiction of the crime, making it easier for police to apprehend him. As shown in an accompanying diagram, a photo-electric cell is the heart of the telephotograph system.

A transparent positive image is wrapped around a cylinder, inside which is the photo-cell. A pin-point of light is focused through the image on the photo-cell, which, as the cylinder revolves, sends varying electric impulses through a wire, proportionate to the black or white sections of the picture. On the receiving end the process is similar, though reversed.

Electric impulses from the photo cell arrive and are admitted through a light valve which plays a spot of light on sensitized film mounted on a cylinder the same size as the one on the sending apparatus. When the film is developed and printed in the ordinary way, a duplicate of the photo on the sending machine is produced. The only noticeable difference is a series of fine parallel lines running across the telephoto, which are inevitable because of the fact that it is scanned a line at a time.

One of the most sure-fire weapons which science has given to the police in fighting crime in the big cities is the tear gas bomb.

Deputy Inspector Louis Dittman of New York calls this the “boogy man” of the criminals. The bomb consists of a bright steel cylinder, 4 inches high.

The use of the tear gas bombs is taught to a special squad of policemen in the new Police Academy building opposite the New York police headquarters. In a corrugated chamber on the roof of the Academy they learn to throw them, learn to use a gas mask in the fumes the bombs release and finally â€”which Is the most trying part of this trainingâ€”the policemen go into the room without their masks to see how the gas affects them.

The bomb itself is a small metal barrel with a projecting point that serves as the fuse. A cotter pin is pulled out of the tip, a cap flies back and starts the fuse sizzling. Exactly seven seconds later the gas burns through a wax covering over a set of holes in the barrel and oozes out. Chlorine and picric acid are the bases of this gas.

Forgeries, counterfeits, and similar “intellectual” crimes are likewise being made more difficult for the criminal. The ultraviolet ray crime detector, which is simply a variation of the familiar sun lamp used so widely as a health aid, becomes invaluable in crime detection because every substance placed under it reacts differently. Visible rays can be filtered from an ultra-violet projector by passing through specially prepared glass. The remaining rays have the property of making the invisible visible. This is the phenomenon of fluorescence, depending on whether the substances retain or lose the property as soon as they are taken outside the radiation of the ultraviolet.

In a demonstration by Dr. Herman Goodman of New York, a speck of dust was dropped into one of two pitchers containing pure water. A drop of a chemical derived from chestnuts was added to both pitchers. Under the ultra-violet ray, the pitcher containing the dust speck appeared a brilliant blue, while the other remained unchanged.

Tear gas is automatically discharged at intruders who force open doors protected by a special lock invented by Charles Brand of New York. Forcing open the door releases a charge of gas which leaves the intruder blinded and helplessâ€”an easy captive for anybody.

Police training methods overlook no aids of science in training prospective members of the force how to fight criminals. Large cities have elaborate police training systems. In New York, for instance, there is a snooting gallery where speed and accuracy with revolver, riot gun, and rifle is taught. At the end of this gallery is a metal movie screen.

On this screen is flashed an action picture of a policeman wrestling with two crooks. Motion is rapidâ€”the bodies twist and squirm. The problem of the rookie is to shoot so that he hits the crooks, but not his fellow officer. Constant practice enables him to become proficient in this important art.

After the crook is caught, or suspects rounded up, the scientific mechanic still has work to do. Special turntables for viewing suspects, presenting every angle of the features; backgrounds on which distances are marked in feet and inches so that it is a simple matter to gauge a man’s statureâ€”these and countless other bits of equipment are used, depending on the ingenuity of the men who make them.

Criminals themselves are swift to turn to advantage inventions which can benefit them. That’s why there’s never any rest in the relentless warfare waged between crooks and the law. That’s why, police officers say, there never can be too many inventions to baffle the crook. It is a fertile field for the experimenter, and one in which the inventor benefits not only his own pocket-book, but the welfare of the country.