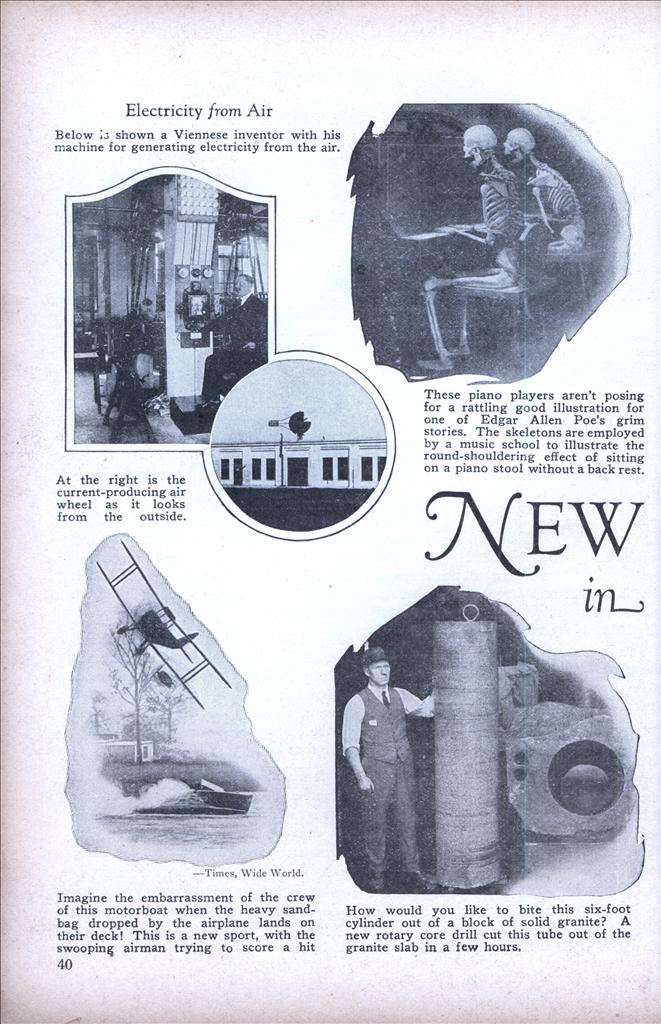 Science keeps pace with the needs of man, as shown by these latest developments from the far corners of the globe.
Human minds must be agile indeed to keep abreast of the bewildering progress of science throughout the world.

At the right is the current-producing air wheel as it looks from the outside.

Imagine the embarrassment of the crew of this motorboat when the heavy sandbag dropped by the airplane lands on their deck! This is a new sport, with the swooping airman trying to score a hit These piano players aren’t posing for a rattling good illustration for one of Edgar Allen Poe’s grim stories. The skeletons are employed by a music school to illustrate the round-shouldering effect of sitting on a piano stool without a back rest.

How would you like to bite this six-foot cylinder out of a block of solid granite? A new rotary core drill cut this tube out of the granite slab in a few hours.

The motor of this tiny yacht is installed beneath the aft deck and exhausts through the open end of the boat. It can be attached or removed at will.

This hospital bed can be changed to an invalid’s chair in the twinkling of an eye, to permit the patient to sit up for a cup of tea.

This. 60-foot lighthouse keeps sailors from going on the shoals off the Danish coast. Note the unusual arrangement of reflectors inside the glass-enclosed tower. The height of the lighthouse is graphically shown in comparison with the figure of the attendant near the door.

The familiar Pathe rooster is shown here strutting his stuff in front of the sound recording device of the newest talking movie machine. He is the first talking trademark to appear on the silver screen.

The teeth of this new portable saw will cut through a log in one tenth the time required by the ordinary cross-cut. It is powered by a compressed air motor.