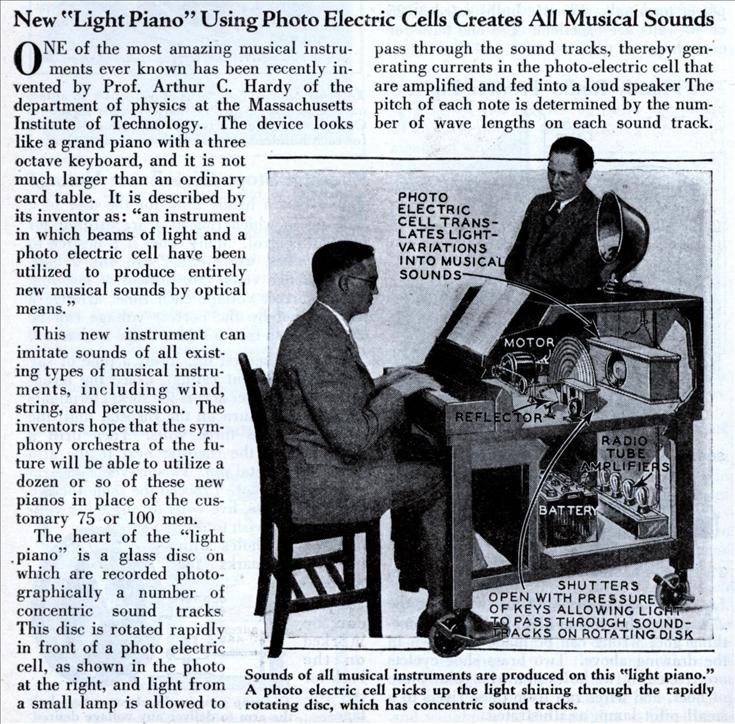 ONE of the most amazing musical instruments ever known has been recently invented by Prof. Arthur C. Hardy of the department of physics at the Massachusetts Institute of Technology. The device looks like a grand piano with a three octave keyboard, and it is not much larger than an ordinary card table. It is described by its inventor as: “an instrument in which beams of light and a photo electric cell have been utilized to produce entirely new musical sounds by optical means.”

This new instrument can imitate sounds of all existing types of musical instruments, including wind, string, and percussion. The inventors hope that the symphony orchestra of the future will be able to utilize a dozen or so of these new pianos in place of the customary 75 or 100 men.

The heart of the “light piano” is a glass disc on which are recorded photographically a number of concentric sound tracks This disc is rotated rapidly in front of a photo electric cell, as shown in the photo at the right, and light from a small lamp is allowed to pass through the sound tracks, thereby generating currents in the photo-electric cell that are amplified and fed into a loud speaker The pitch of each note is determined by the number of wave lengths on each sound track.