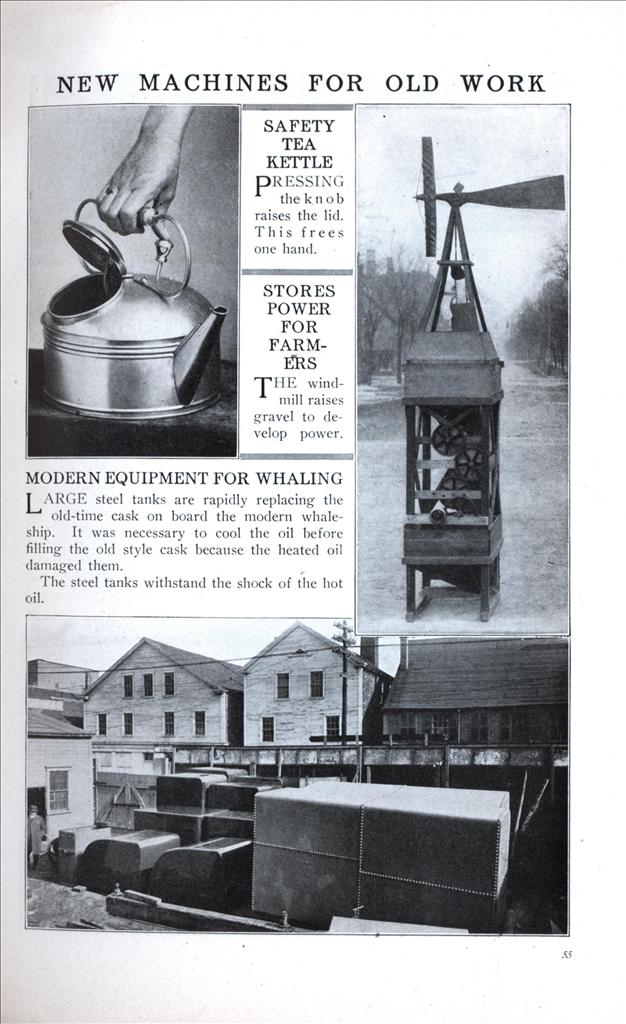 SAFETY TEA KETTLE
PRESSING the knob raises the lid. This frees one hand.

MODERN EQUIPMENT FOR WHALING
LARGE steel tanks are rapidly replacing the old-time cask on board the modern whale-ship. It was necessary to cool the oil before filling the old style cask because the heated oil damaged them.

The steel tanks withstand the shock of the hot oil.

TESTING BRICKS BY FIRE
FIREPROOF tile and brick are being tested as building- materials by means of an ordinary gas-burning blast furnace, -which directs flames straight at the wall of tile to be tested. A calorimeter placed against the tile opposite the blast records the heat transmitted, and after each test is completed the disintegration of the tile is noted.

STOPPING RUNAWAY CARS
One road has solved the problem of stopping runaway cars most satisfactorily by having a safety switch always open at the foot of each grade. Screened gravel is dumped inside the switch track, and is graded higher toward the far end of the switch, thus affording increasing resistance to a car’s passage.

TESTING NEW SHIP BRAKE
A NEW tank designed for testing movement of ship hulls through water greatly facilitated the trying out of a new type of ship brake. The second view shows the model with brakes set.

ELECTRIC CONTROL FOR DUMBWAITERS
ONE girl now sits quietly on a comfortable chair and by pushing buttons and watching electric lights, controls fourteen dumbwaiters in a large New York store. The fourteen dumbwaiters are controlled from a central board, and are operated entirely by electricity. New dumbwaiters may be added to this system at any time.

NEW WRINKLE FOR GOLF TRAINS
A SPECIAL lunch car for golfers who do not want to waste time picking up the noon meal in town, has been introduced by a Chicago railway. The car is finished inside in white enamel and presents a bright, attractive appearance. At one end is a tiny kitchen, and from this, the lunch counter runs the entire length of the car. Seats for twenty seven patrons run along one side of the counter, and on the other are the cupboards and appurtenances. The menu is simple and the service quick.

CEILING FAN IN LIGHT SOCKET
THE costly ceiling fan, waving its majestic arms and making little breeze, probably will yield to the socket fan. The socket fan consists of a little motor running on either direct or alternating current, which screws into a lamp socket, and a fan hanging parallel to the floor, attached to the motor.

DEVICE TO SAVE WINDOWS
AS the new subway blasts its way through New York streets, the plate glass windows require some sort of protection. Accordingly, necessity mothered another invention, the new device in the picture, and the children along the streets promptly christened it a “Daddy Long Legs”. It is practically a simple truss that prevents the plate glass from bellying when the blast creates a sudden air pressure on the outside or when the vibration from the blast shakes the building, as it frequently does.

MACHINE THAT REPLACES SHOVELERS
Because it annoyed the coal man to have to charge an additional fifty cents a ton for his coal only to turn all of the extra charge over to the shoveler and the carrier, he began to work his inventive genius. Today he has a machine which will put twenty five tons of coal into bags in an hour. This is the three-wheeled device shown in the illustration. The cart is backed up to a pile of coal on the ground, the motor, run by gasoline or electricity, is started, and the buckets hoist the coal. This is dumped into a hopper at the top, and is fed down to a divided chute from which two bags can be filled at the same time. By this arrangement, the outside cost of bagging the coal is not to exceed three cents a ton.