Popular Science
Issue: Sep, 1934
Posted in: Kitchen
Tags: how its made
1 Comment on New Marvels of Food Factories (Sep, 1934) 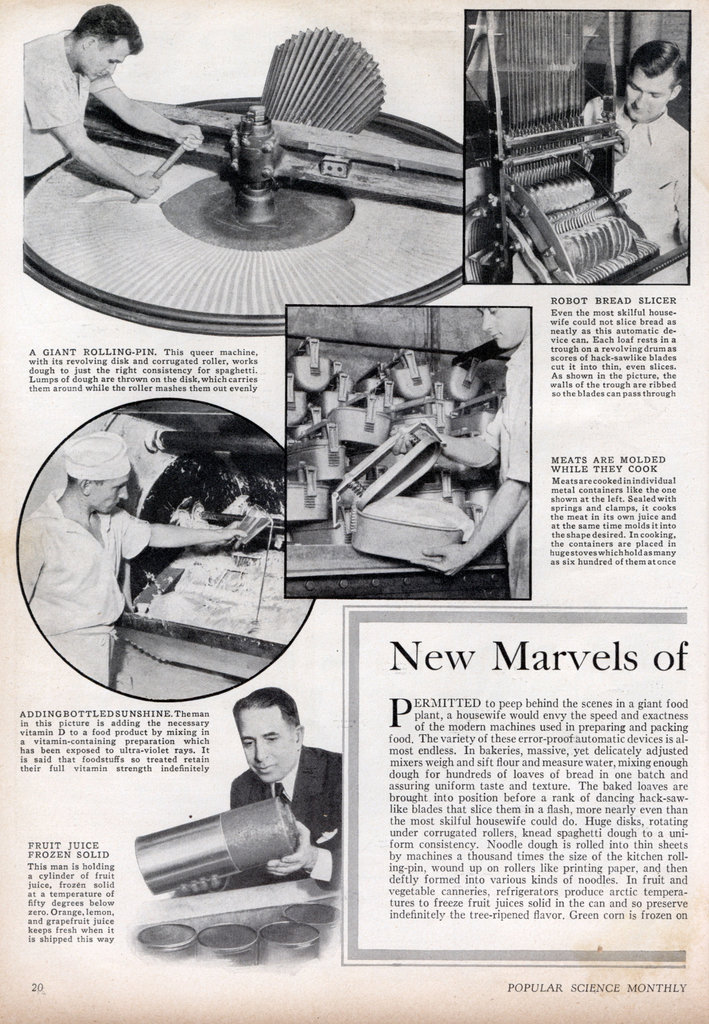 PERMITTED to peep behind the scenes in a giant food plant, a housewife would envy the speed and exactness of the modern machines used in preparing and packing food. The variety of these error-proof automatic devices is almost endless. In bakeries, massive, yet delicately adjusted mixers weigh and sift flour and measure water, mixing enough dough for hundreds of loaves of bread in one batch and assuring uniform taste and texture. The baked loaves are brought into position before a rank of dancing hack-sawlike blades that slice them in a flash, more nearly even than the most skilful housewife could do. Huge disks, rotating under corrugated rollers, knead spaghetti dough to a uniform consistency. Noodle dough is rolled into thin sheets by machines a thousand times the size of the kitchen rolling-pin, wound up on rollers like printing paper, and then deftly formed into various kinds of noodles. In fruit and vegetable canneries, refrigerators produce arctic temperatures to freeze fruit juices solid in the can and so preserve indefinitely the tree-ripened flavor. Green corn is frozen on the cob on the day it is picked, for enjoyment at any season of the year. In meat-packing plants, high-speed mixers shoot yards of sausage and frankfurters into casings every minute, turning it out in continuous strings which are later tied at intervals to make the familiar links. Gigantic steam tanks cook 600 hams at a time, each ham encased in an individual metal container that seals the flavor in and also shapes the ham. The ham cooks in its own juice for a prescribed time at a definite temperature, automatic controls removing all guesswork. Many other kinds of meat are cooked in the same way. Charcoal-lined tubes in soup canneries quickly convey the hot soup from floor to floor and automatic Canners fill the cans and seal them while the soup is still steaming. Vitamins are added to foods that lack them, in such a way that the vitamins are preserved. Little waste is permitted in factory cooking. The cooking liquids, usually wasted in the home, are carefully drawn off and the fats extracted to make soap. These marvelous machines represent the application of modern industrial engineering to the age-old art of cooking.