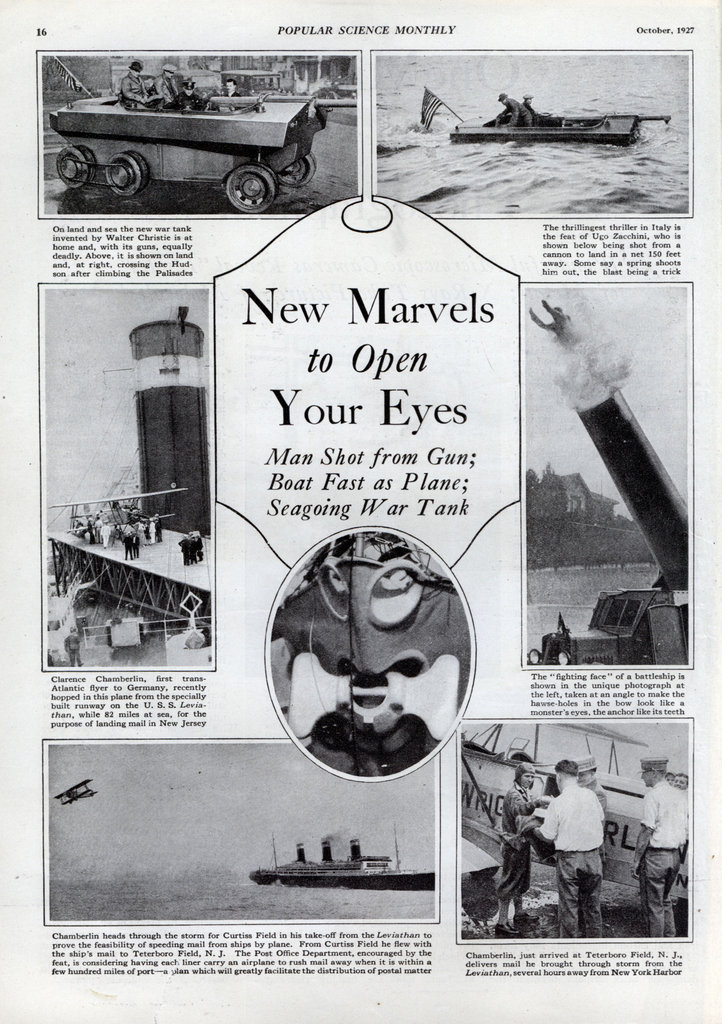 New Marvels to Open Your Eyes

On land and sea the new war tank invented by Walter Christie is at home and, with its guns, equally deadly. Above, it is shown on land and, at right, crossing the Hudson after climbing the Palisades.

Clarence Chamberlin, first trans-Atlantic flyer to Germany, recently hopped in this plane from the specially built runway on the U.S.S. Leviathan, while 82 miles at sea, for the purpose of landing mail in New Jersey.

Chamberlin heads through the storm for Curtiss Field in his take-off from the Leviathan to prove the feasibility of speeding mail from ships by plane. From Curtiss Field he flew with the ship’s mail to Teterboro Field, N. J. The Post Office Department, encouraged by the feat, is considering having each liner carry an airplane to rush mail away when it is within a few hundred miles of port—a plan which will greatly facilitate the distribution of postal matter.

The thrillingest thriller in Italy is the feat of Ugo Zacchini, who is shown below being shot from a cannon to land in a net 150 feet away. Some say a spring shoots him out, the blast being a trick.

The “fighting face” of a battleship is shown in the unique photograph at the left, taken at an angle to make the hawse-holes in the bow look like a monster’s eyes, the anchor like its teeth.

Chamberlin, just arrived at Teterboro Field, N.J. delivers mail he brought through storm from the Leviathan, several hours away from New York Harbor.

A speedboat that can cross the Atlantic in twenty-four hours and go around the world in a few days is proposed by Max Kleon, of New York, its inventor, who is exhibiting a model of the craft. With its perfect streamline shape and its long-finned keel, which he is explaining, he declares the craft can make 180 miles an hour when driven by an engine of fair power. The designer credits the long underfin for the superior speed he claims.

Fifty million pounds will be supported by four gigantic 300-ton bearings like that in the illustration above, just installed at Dawes Point, Sydney, Australia, to bear the weight of the steel arch bridge that will span Sydney harbor. Two are used at each end of the bridge. They permit expansion of the girders, due to hot weather, thus averting resistless pressure that would crack the foundations of the structure, eventually wrecking it.

An electric auditor, pictured to the left above, will save 60 per cent of clerical labor by recording all sales and other data usually written down by salespeople in stores. They press buttons; the machine does the rest. Professor Woodruff, Massachusetts Technology Institute, and Edward Rogal, a former instructor, made it.

The electric grid glow tube that won its 28-year-old inventor, D. D. Knowles, the John Scott $1,000 prize and medal, is shown at the left. Knowles operates this most sensitive current control device, previously described in Popular Science Monthly, by waving his hand near it The latest and most powerful machine to fight forest fires is this —in use in the Northwest. It races on steel wheels on railroad tracks to the point nearest the fire, then changes to rubber-tired wheels and goes on. One engine drives it and, arrived at the fire, operates pumps for four one-and-a-half-inch streams of water.

No rudder is required for the queer speedboat pictured at the left with Adrien Remy, its French inventor, who says it will bring him across the Atlantic at forty miles an hour. The three air propellers at the top drive the two-hulled boat. By shifting the three engines in the cabin that connects the hulls, one side or the other is lowered, altering the course toward the low side.