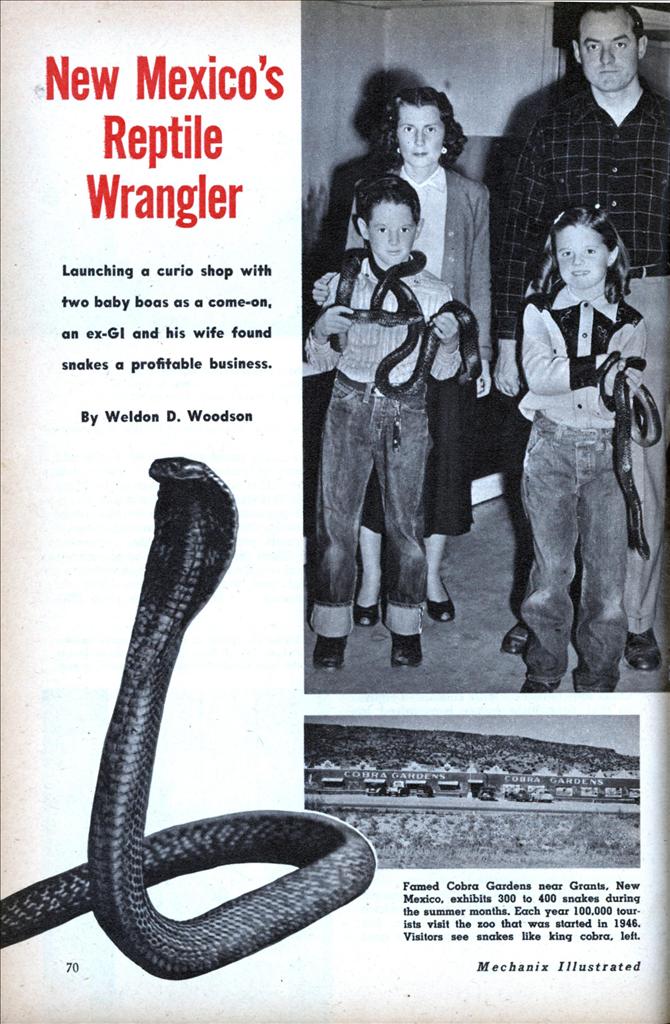 Launching a curio shop with two baby boas as a come-on, an ex-GI and his wife found snakes a profitable business.

ON May 1, 1946, 26-year-old Texas-born ex-GI Herman Atkinson and his 24-year-old wife Phyllis opened a small curio shop on tourist-packed U. S. Highway 66, a mile and a half west of the pint-size village of Grants, New Mexico.

For bait to lure motorists, they had caged two baby boa constrictors. A gargantuan sign blazened to the world their Lilliputian “den of death.” Despite the limitations of their improvised menagerie, they observed that visitors showed more wide-eyed interest in the duet of boas than the curios. So why not, they reasoned, continue the shop but annex to it a mammoth reptile house and charge admission?

During the summer months, they exhibit 300 to 400 snakes and in winter approximately half that number. They feature banded kraits, rattlesnakes, pythons, anacondas, mambas and most sensational of all, the true cobras including king and spitting. In fact, Herman Atkinson plays nursemaid to more cobras than any man in the United States. Fittingly, his establishment bears the name: Cobra Gardens.

Each year approximately 100,000 people visit the place, the heaviest month being August with about 25,000. Visitors come from all 48 states and from India, South America, Mexico, Switzerland, Puerto Rico, England, Canada, Sweden, Denmark, Alaska and Siam. Besides Herman and Phyllis Atkinson, the act includes their 9-year-old son Peter and 8-year-old daughter Marilynn. Almost any hour one may catch them with harmless indigo snakes twined around their necks. They have attached pet names to the specimens in the cages, such as Si the Siamese cobra, Round-Spot the cobra with an O on the back of its hood, Moe the giant python, King the king cobra. Other storytelling names include Scar Nose and Climber.

The one on whose fangs rests the most dramatic story, however, is the Indian cobra christened Grace Wiley. It is the actual snake that fatally bit Mrs. Wiley in her Cypress, California, reptile zoo near Los Angeles. The letter G vividly stands out etched on- the color pattern of its hood. Since G is the first letter in Grace, Mrs. Grace Wiley happily exclaimed that it was a good omen but as she attempted to coax it to spread its hood to be photographed, it drew back, then bit her on a finger. About an hour after the bite she died in a hospital. For many years she had handled poisonous snakes with their fangs intact and branded it cruel to remove them. Among her last words was a plea not to destroy her attacker. From the Grace Wiley collection the cobra went to Evans Reptile Gardens in Phoenix, Arizona where Atkinson corralled it for the princely sum of $500.

As a baby sitter for cobras, Atkinson’s life is constantly in jeopardy. Once, with two assistants, he took a king cobra out of its cage to treat it for sore mouth. The cage had two separate doors with a sliding panel in the center. This enabled him to move the snake from one side to the other and thereby clean the cage. Then Atkinson pulled open the sliding panel to allow it the freedom of the whole cage.

Suddenly the throng of spectators screamed and scattered in all directions.

The assistants dashed for the nearest exit doors. Atkinson looked down and saw the cobra had squirmed halfway out through its other door. Bang! He jammed the sliding panel down on the end of its tail to hold it. Gingerly he crawled on top of the cage. Using a long hook, he managed to maneuver the cobra back into its cage.

Shortly after he became a snake handler, he purchased from Henry Trefflich of New York a 15-foot king cobra. A bad scar marred the back of its neck, caused by the noose used when it was caught. With its refusal to feed, Atkinson concluded that it might have been injured internally. He sought one of the local doctors to X-ray the snake. The doctor refused but his wife volunteered.

At the time Atkinson’s father was visiting him and consented to drive him to the doctor’s clinic. After catching the cobra, Atkinson decided it would be better if he and Phyllis held it in the back seat rather than in a bag. That way it would be easier to hold it under the X-ray machine when they arrived. Atkinson’s father, not too happy about the whole thing, chauffeured them, but in his confusion forgot to shift the gears on the car and drove all the way in first gear. When they reached town Phyllis was posted as look out so that they could sneak from the car into the doctor’s office and back to the car. A passing pedestrian would not have been very pleased when confronted with a 15-foot cobra. Sums up Atkinson, “The X-ray was a success but I’m afraid my father’s blood pressure will never return to normal.”

When one handles a poisonous snake for any reason, there’s always imminent danger. Atkinson’s most dependable tool con- sists of a three-foot-long broomstick with a metal S-shape hook on the end. With this he captures a snake by pressing the hook just back of its head so that it cannot turn to either side.

Tending a household full of snakes demands such chores as keeping their cages clean, shedding their skin when they are unable to do it themselves, checking their mouths for infection, removing parasites and force feeding those who tenaciously refuse to eat. The smaller snakes get white mice, frogs, salamanders and insects. The larger pythons banquet on ducks and rabbits. The Grace Wiley cobra, in the pink of health, relishes young squabs.

To force feed a large snake Atkinson mixes ground beef, raw eggs, milk and vitamins. He forces this into the snake by means of a hand pump attached to a piece of tubing that reaches about halfway through the length of the snake’s body. This must be performed delicately since there is a possibility of injuring the snake internally. When he force-feeds a venomous cobra with his fingers near the open mouth, one slip of a finger and an epitaph would be erected for the maestro.

In stocking and replenishing his gardens he buys rattlesnakes and small, harmless snakes locally from individuals at $1.50 a pound. He imports cobras, pythons and mambas direct from Africa, India and Malaya. Cobras delivered to this country have a market value of approximately $35 each. Large pythons bring from $300 to $1,000 each. He pays about $300 for a large king cobra.

Concerning reactions of visitors, Atkinson reports that they appear amazed at the tremendous collection in such a desolate and out-of-the-way place. They often compliment him on the manner in which he displays his snakes as well as on the cleanliness of the reptile house. “Then, of course, there are always a few,” lie further explains, “who seem to think that unless the snakes are leaping from one end of the cage to Smother, they are dead. This is why I maintain an open pit and conduct lectures continually during the summer months.”

When motorists approach Cobra Gardens they behold a spectacle of P. T. Barnum 0 proportions. With a deserty, rock-ribbed slope as a backdrop, garish paintings of monstrous snakes adorn the outside walls of the elongated reptile house like banners in front of a side show. They convey the impression that the exhibition inside is colossal. And the 100,000-a-year visitors attest that the actual show, from every standpoint, measures up to the sign. •