The funny thing about this ad is that “NASA Space Telescope” was the original name of the Hubble Space Telescope and Perkin-Elmer is the contractor that delivered a flawed main mirror, requiring a very expensive and difficult repair mission. 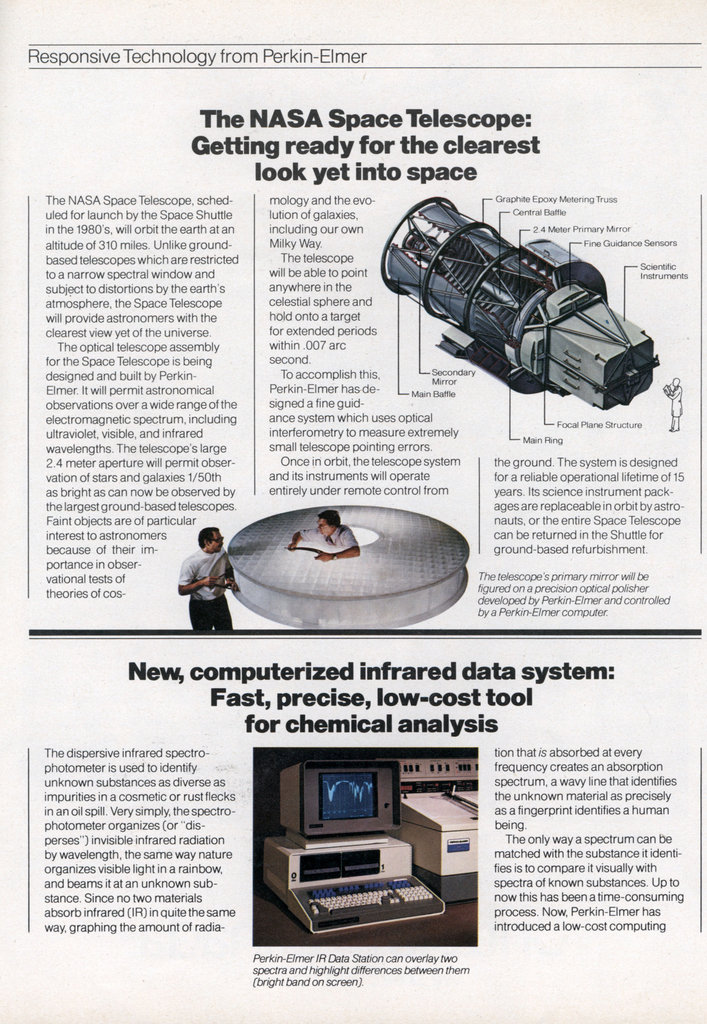 The NASA Space Telescope: Getting ready for the clearest look yet into space

The NASA Space Telescope, scheduled for launch by the Space Shuttle in the 1980s, will orbit the earth at an altitude of 310 miles. Unlike ground-based telescopes which are restricted to a narrow spectral window and subject to distortions by the earth’s atmosphere, the Space Telescope will provide astronomers with the clearest view yet of the universe.

The optical telescope assembly for the Space Telescope is being designed and built by Perkin-Elmer. It will permit astronomical observations over a wide range of the electromagnetic spectrum, including ultraviolet, visible, and infrared wavelengths. The telescope’s large 2.4 meter aperture will permit observation of stars and galaxies 1/50th as bright as can now be observed by the largest ground-based telescopes. Faint objects are of particular interest to astronomers because of their importance in observational tests of theories of cosmology and the evolution of galaxies, including our own Milky Way.

The telescope will be able to point anywhere in the celestial sphere and hold onto a target for extended periods within .007 arc second.

Once in orbit, the telescope system and its instruments will operate entirely under remote control from the ground. The system is designed for a reliable operational lifetime of 15 years. Its science instrument packages are replaceable in orbit by astronauts, or the entire Space Telescope can be returned in the Shuttle for ground-based refurbishment.

The dispersive infrared spectrophotometer is used to identify unknown substances as diverse as impurities in a cosmetic or rust flecks in an oil spill. Very simply, the spectrophotometer organizes (or “disperses”) invisible infrared radiation by wavelength, the same way nature organizes visible light in a rainbow, and beams it at an unknown substance. Since no two materials absorb infrared (IR) in quite the same way, graphing the amount of radiation that is absorbed at every frequency creates an absorption spectrum, a wavy line that identifies the unknown material as precisely as a fingerprint identifies a human being.

The only way a spectrum can be matched with the substance it identifies is to compare it visually with spectra of known substances. Up to now this has been a time-consuming process. Now, Perkin-Elmer has introduced a low-cost computing and display facilityâ€”we call it the IR Data Stationâ€”which, linked to one of our IR spectrophotometers, greatly improves the ease, speed and accuracy of the process. As one early user put it, the Data Station “does for IR spectroscopy what the slide rule did for mental arithmetic.”

Only moments after the operator puts a sample into the spectrophotometer’s sample compartment, a spectrum of the substance traces across the Data Stations CRT screen. At the touch of a button, this spectrum can be accumulated or smoothed to get rid of electronic baseline noise (which â€¢ may be present if the sample was microscopic or ill-prepared). It can then be compared with standard reference spectra for identification. Since there are spectra for literally hundreds of thousands of substances on record, this is easier to say than to do.

So the Data Station enumerates the peaks of a sample’s spectrum and compares them with lists of peaks stored in its
memory. It then gives the operator a “hit list” of probable identifications which can be checked quickly against a spectrum library. The saving in time and effort is immense.

For some commercial applications, the Data Station can summon known spectra to the screen, one or two at a time, scaled and oriented for comparison with the unknown sample. It can also lay one spectrum over the other and highlight the difference.

In brief, a remarkable system. If you are involved in chemical analysis of any kind, we’d be delighted to send you more detailed information about it. See below for where to write.

First of a new generation of minicomputer systems:

The Perkin-Elmer 3220 and FORTRAN VII

Only a few years ago, big data manipulation jobs such as handling the reservations for an airline were strictly the province of large, powerful, and expensive mainframe computers. Minicomputers did mini “jobs-handling the data generated by a single scientific instrument, for example.

Then, in 1974, Perkin-Elmer introduced the world’s first 32-bit minicomputer. Priced far lower than a mainframe, it nonetheless could perform many of the same tasks.

Now Perkin-Elmer has introduced the first of the next generation of 32-bit “superminis”â€”the 3220. The 3220 incorporates 300 man-years of software development and all the advanced 32-bit technology we’ve developed during the past five years in over 2000 installations. It can handle massive realtime simulation, data acquisition, and scientific data reduction more economically than mainframes. Yet the 3220 costs only half as much as other systems in its class.

For cognoscenti, some key facts: The fast Metal Oxide Semiconductor (MOS) memory is expandable from 256 kilobytes to four megabytes. Processor architecture is based on 128 registers, divided into eight sets, enabling the processor to switch and execute tasks more rapidly than conventional architecture.

But it is more than hardware that makes the 3220: it is the interaction of hardware with software. For example, the Perkin-Elmer developed FORTRAN VII compiler “globally” optimizes programs. That is, every flow path is analyzed to minimize the demand on system resources. The result: exceptionally fast run times. System capacity is exceptional, too: up to 32 users can control as many as 255 different programs simultaneously in a 3220 system. In short, the 3220 is ideal for the system builder and user whose applications require the computational power of a 32-bit processor coupled with reliable system software at a very reasonable price.

For more information on these products, please write: