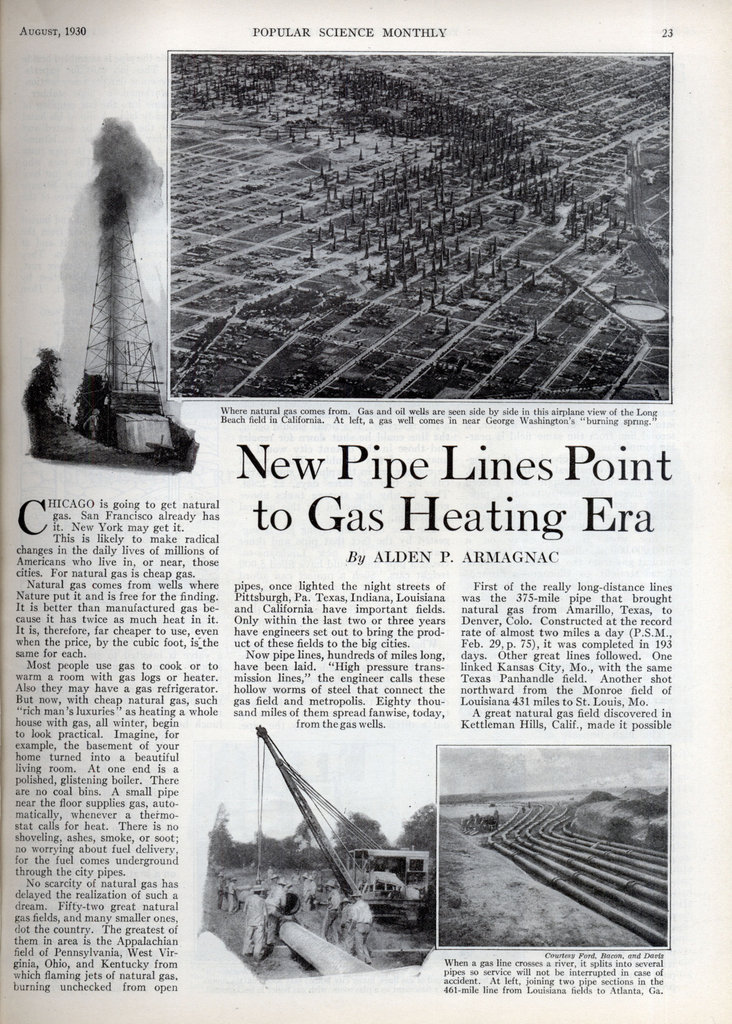 CHICAGO is going to get natural gas. San Francisco already has it. New York may get it. This is likely to make radical changes in the daily lives of millions of Americans who live in, or near, those cities. For natural gas is cheap gas.

Natural gas comes from wells where Nature put it and is free for the finding. It is better than manufactured gas because it has twice as much heat in it. It is, therefore, far cheaper to use, even when the price, by the cubic foot, is the same for each.

Most people use gas to cook or to warm a room with gas logs or heater. Also they may have a gas refrigerator. But now, with cheap natural gas, such “rich man’s luxuries” as heating a whole house with gas, all winter, begin to look practical. Imagine, for example, the basement of your home turned into a beautiful living room. At one end is a polished, glistening boiler. There are no coal bins. A small pipe near the floor supplies gas, automatically, whenever a thermostat calls for heat. There is no shoveling, ashes, smoke, or soot; no worrying about fuel delivery, for the fuel comes underground through the city pipes.

No scarcity of natural gas has delayed the realization of such a dream. Fifty-two great natural gas fields, and many smaller ones, dot the country. The greatest of them in area is the Appalachian field of Pennsylvania, West Virginia, Ohio, and Kentucky from which flaming jets of natural gas, burning unchecked from open pipes, once lighted the night streets of Pittsburgh, Pa. Texas, Indiana, Louisiana and California have important fields. Only within the last two or three years have engineers set out to bring the product of these fields to the big cities.

Now pipe lines, hundreds of miles long, have been laid. “High pressure transmission lines,” the engineer calls these hollow worms of steel that connect the gas field and metropolis. Eighty thousand miles of them spread fanwise, today, from the gas wells.

First of the really long-distance lines was the 375-mile pipe that brought natural gas from Amarillo, Texas, to Denver, Colo. Constructed at the record rate of almost two miles a day (P.S.M., Feb. 29, p. 75), it was completed in 193 days. Other great lines followed. One linked Kansas City, Mo., with the same Texas Panhandle field. Another shot northward from the Monroe field of Louisiana 431 miles to St. Louis, Mo.

A great natural gas field discovered in Kettleman Hills, Calif., made it possible to supply natural gas to San Francisco, 190 miles away. Last year the first line was completed, and natural gas was turned into the mains. As this is written, a second line from the same field is nearing completion.

This year saw the opening of the longest pipe line for natural gas in the world. Leaping the Mississippi and sixteen other rivers, the twenty-two-inch pipe, which starts at Monroe, La., crosses Mississippi and Alabama and ends in Atlanta, Ga.—a distance of 461 miles.

Now work is under way on a $100,000,000 pipe line that will transport natural gas from the Panhandle field of Texas straight to Chicago—a distance of more than 800 miles. Its three-foot pipes will be monsters of their kind. Extensions will be built west to Minneapolis and St. Paul, Minn., together with other connections to existing gas systems i.i the East.

These eastern gas lines, together with oil pipe lines which might readily be converted to gas, already approach within a few miles of New York City. In the very near future, competent observers predict, they will be extended, and New York for the first time will burn natural gas.

The high pressure at which engineers have learned to confine and pump the gas in pipes makes these lines possible. In many fields, the natural or “rock” pressure of the gas as it issues from the well is not sufficient to force it through the long pipes. So lines from the individual wells converge at the gas field in a compressor station. Here powerful pumps squeeze the gas to a pressure of from 200 to 400 pounds to the square inch and start it on its trip through the pipe line. Before it reaches its destination it may pass through several compressor stations, and min- gle with gas piped in from other fields.

So tightly is the gas squeezed into the line that a twenty-two-inch pipe becomes a real reservoir. If a break should occur, the line could be shut down for repairs and those in the distant city would be unaware of any trouble. There would be enough gas in the pipe to supply the city for two or three days, at least. That is why big storage tanks above ground are not needed by this natural gas system.

The size of a line-laying job is suggested by the fact that pipe and other materials for the new Louisiana-to-Georgia pipe line would have filled 5,000 freight cars. Such a project can afford no mistakes. It starts with a careful survey of the route. Airplanes helped survey this line, the mosaic maps they made being used in selecting a route through difficult sections of the country.

When right-of-way men have bought the necessary land, the real work is ready to start. Pipe is unloaded from railway cars and strung out along the route. Speedy machines, one type of which can dig a mile of trench five feet deep and twenty-six inches wide in a day, scoop out a ditch in which to bury the pipe.

Meanwhile the pipe is assembled beside the ditch. This job calls for experts While a pipe crane dangles a new section, a skilled workman, a “pipe stabber,” guides it home into the last coupling of the line already laid. A slip of his hand would allow the pipe to be dented and spoiled. Other experts apply the bituminous coating that protects the pipe from corrosion underground. The men who laid the southern pipe line knew just how much protection was necessary beeause they had made a chemical survey of the types of soil all along the route.

Not even when it is joined and buried is the line complete. Starting from the gas field, crews march along it and at regular intervals dig it up again. They cut it and blow it out to remove rust, scale, and any possible obstruction by turning high-pressure gas into it. Then a valve is inserted to shut off the gas supply when future repairs may be needed.

Almost anything may come out of the pipe when it is blown—rabbits, monkey wrenches, articles of clothing, lunch boxes. While a gas line is being laid, its open end may hold a workman’s overalls or his lunch, and occasionally a section is added before he removes them. At night the open pipe attracts small animals. Usually they flee with the arrival of the morning gang, but sometimes they dash far into the pipe instead— j to come hurtling out when high pressure is applied.

Line walkers, like patrolmen on a beat, regularly inspect sections of the pipe. Each carries a large implement resembling a crowbar, which he thrusts into the earth every now and then. He puts his nose to the hole I thus made and sniffs for escaping gas. There are visible signs, j too, when all is not well with a’-‘ gas line. A patch of vegetation 1 near a gas line betrays gas, escaping in quantity, by brown patches. If a serious break has occurred it is easy to find. The broken line, under the terrific pressure that it carries, probably will have leaped clear out of the ditch in which it was buried.

A gas transmission line is run much like a railway, and an important official at its central office is the chief dispatcher. His duty is to distribute gas at the proper pressure to all the cities of a state-wide system. Before him, electric light bulbs flash on a huge chart to indicate the open or closed position of all the valves. Meters show him the pressure in the various sections. If pressure falls too low in the Dayton supply, for example, the Ohio operator gives orders to divert more gas from some place where the pressure is high. Telephone and telegraph give him instant communication with key stations along the way.

NO LESS concerned with the weather than an aviator or a Sunday picnicker is this chief dispatcher. It takes eighteen hours for Texas gas to travel through the pipes to Kansas City, Mo., where a sudden cold snap may mean a demand for an additional hundred million cubic feet of gas in a twenty-four-hour period. So weather reports are rushed to the chief dispatcher at Bartlesville, Okla., from the U. S. Weather Bureau Station at Fort Smith, Ark., while special observers along the pipe line supplement these reports.

So has the use of gas from the earth progressed in the hundred years that it has been known and used. It is one of the oldest of fuels, and its history really begins before the nineteenth century.

George Washington was one of the first investors in natural gas property. In 1775 he visited a tract near Charleston, W. Va., where a strange “burning spring” awed sight-seers. Washington bought the property as a curiosity, and presented it to the nation as a park.

Two brothers, David and Joseph Ruffner, discovered the first gas well when, in the early 1800’s, they drilled a fifty-eight-foot shaft for salt in the Great Kanawha Valley of West Virginia. This was thirty years before petroleum was discovered.

Although other cities were beginning to make gas in factories, Fredonia, N. Y., is said to have been the first city in the United States to use natural gas commercially. This was in 1826. Titusville, Pa., in 1872, installed the first natural gas pipe system for domestic service. There were no gas meters in those days. Companies charged for gas by counting the number of burners in use and estimating how many hours each was likely to be run. At a certain hour the night watch would strike an iron rod as a signal that it was time to turn out all gaslights.

WILL the supply of natural gas ever give out? It may some day—but new wells, it seems, are being found as fast as the old ones run out. Engineers point out that sensible business men would hardly project a gas line from Texas to Chicago if they feared that natural gas might soon be exhausted.

Where are gas companies to put gas if it cannot be pumped into a pipe and sold immediately? Within the last few years they have found a new place to keep it. They pump it back into abandoned gas or oil wells.

Both natural and manufactured gas are now pumped into these great storage reservoirs that Nature provides. More than a tenth of all the gas produced by four great California fields is being stored in this way. It would require about four hundred 20,000,000-cubic-foot gas tanks to hold as much gas as is stored underground in one Kentucky field. Very little is lost in the subterranean sands.