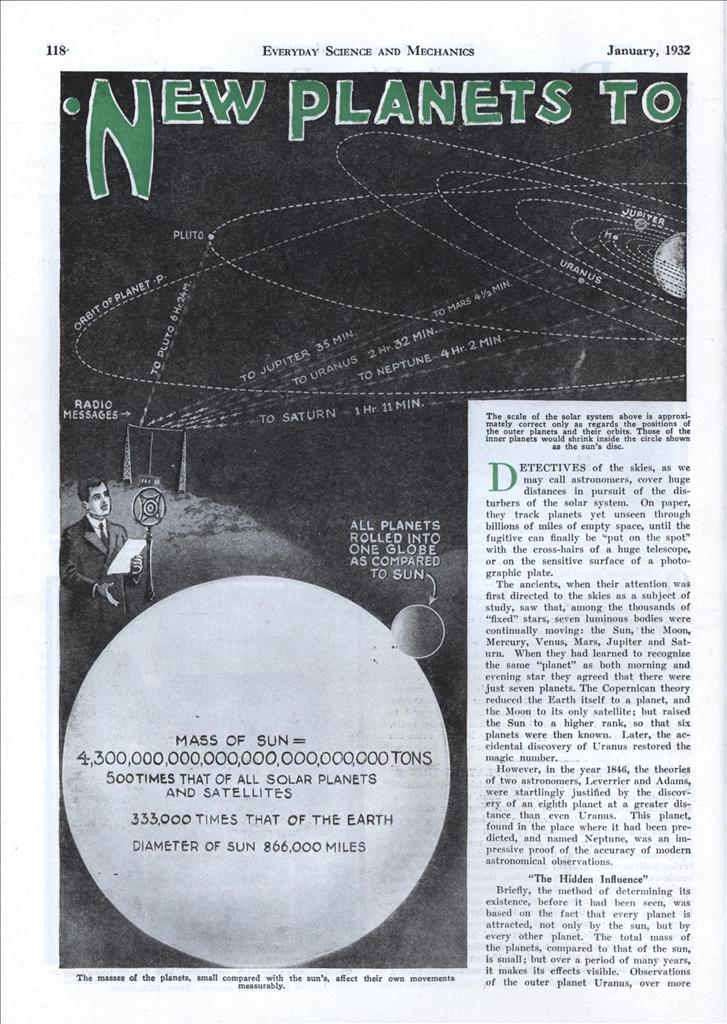 New Planets to Be Discovered

Detectives of the skies, as we may call astronomers, cover huge distances in pursuit of the disturbers of the solar system. On paper, they track planets yet unseen through billions of miles of empty space, until the fugitive can finally be “put on the spot” with the cross-hairs of a huge telescope, or on the sensitive surface of a photographic plate.

The ancients, when their attention was first directed to the skies as a subject of study, saw that, among the thousands of “fixed” stars, seven luminous bodies were continually moving: the Sun, the Moon, Mercury, Venus, Mars, Jupiter and Saturn. When they had learned to recognize the same “planet” as both morning and evening star they agreed that there were just seven planets. The Copernican theory reduced the Earth itself to a planet, and the Moon to its only satellite; but raised the Sun to a higher rank, so that six planets were then known. Later, the accidental discovery of Uranus restored the magic number.

However, in the year 1846, the theories of two astronomers, Leverrier and Adams, were startlingly justified by the discovery of an eighth planet at a greater distance than even Uranus. This planet, found in the place where it had been predicted, and named Neptune, was an impressive proof of the accuracy of modern astronomical observations.

Briefly, the method of determining its existence, before it had been seen, was based on the fact that every planet is attracted, not only by the sun, but by every other planet. The total mass of the planets, compared to that of the sun, is small; but over a period of many years, it makes its effects visible. Observations of the outer planet Uranus, over more than half a century, indicated that beyond it was something which “perturbed” its motion; and Neptune was accordingly sought and found.

In more recent years, careful observations of Uranus and Neptune indicated other disturbing forces, not yet accounted for, but presumably indicating the presence of one or more large planets at immense distances. The late Percival Lowell, and Prof. W. H. Pickering, especially, gave much time to the study of this problem. The discovery, after long search, of the distant planet Pluto was hailed as bearing out Lowell’s predictions.

However, Pluto is disappointingly small; astronomers felt that the “biggest one had got away,” and Pickering, after further study, confidently announced the position (in a general way) of another planet “P” larger than any other except the giants Jupiter and Saturn. Conjecturally, its diameter is some 40,000 miles; but this cannot be verified until its disc is seen.

At present “P” is supposed to be in the southern constellation of the Telescope, which cannot be seen in the United States; and so slow is its motion that a couple of hundred years may pass before the northern observatories can look for it.

In the illustration heading this article, the solar system has been indicated as seen from the southern side of the ecliptic, or earth’s orbit. (While northern readers may think of the north as always uppermost, the idea is rather too local; and certainly has no justification for a viewpoint in outer space.) It has been impossible to preserve the scale, with reference to the inner planets; whose orbits would actually be inside the disc denoting the sun (in the center between pages). The footrule of the solar system—the earth’s mean distance from the sun, of nearly 93 million miles—is but one one-hundredth of the possible length of the orbit of “P.”

It is a fundamental principle of astronomy that the “square of the time” of a body revolving around another is directly proportioned to the “cube of the distance,” and the sum of the masses of the two bodies.

For instance, Jupiter, at a little more than five times the distance of the earth, revolves around the sun in a little less than twelve years. The square of the time (11.86) equals the cube of the distance (5.2), when both are measured in units of the earth’s distance and the earth’s year.

All these planets revolve in very nearly the same plane as the earth, and are therefore found by the astronomer always in a narrow belt of the heavens which is called the Zodiac. But, when Pluto was discovered, it became apparent that his orbit is very eccentric, and inclined at a considerable angle to the rest of the solar system. Pluto passes at times within the orbit of Neptune, and at others is nearly four billion miles from the sun; his period is estimated at about 250 years, but it may be supposed that this estimate is subject to correction. As yet, it has been impossible to measure the diameter of Pluto with the micrometers used in telescopes; and it is presumed that he is not more than 4,000 miles across, or about the size of Mars, and a dwarf among the great outer planets.

The distance of the hypothetical planet “P” is supposed, on the basis of present estimates, to be from five to nine billion miles; and its period of revolution about 656 earthly years, corresponding to an average distance of seven billion miles.

Yet even “P” may not be the final outpost of the sun’s domain. Pickering also maintains the existence of two other planets “S” and “T,” on which more data are to be sought.

In the Outer Darkness Nearly two hundred years ago, the French astronomer Clairaut suggested the existence of outer planets, from another line of reasoning. The fact that comets, when their period of return to the neighborhood of the sun is tabulated, fall into groups, indicates that they are profoundly affected by the attraction of the large planets, which tend to make the former take orbits extending to about the distance of the latter. Emphasis was given this argument by the discovery later, of Uranus.

Pickering has tabulated the movements of sixteen comets, which he believes to be under the influence of “P”; others, no doubt, follow the movements of planets more distant. When it is considered that some comets recede from the sun to such a distance that a thousand years is required to go, and another thousand to return, the mind is somewhat awed by the possibility of a planet twenty-five billion miles from the sun, and revolving around it in a period of more than four thousand years.

At such a distance, the sun would apparently have shrunk to a point of light, betraying no disc to the eye, and giving hut one sixty-seven-thousandth of the light which we receive from our luminary. Such a planet, though as large as Jupiter, might be forever invisible to us at its enormous distance, yet exert enormous gravitational influence on the denizens of interstellar space, and draw in to us those comets which come and go at intervals of two thousand years. On such a planet, too, if its movements could be observed, over enough millennia, the influence of the nearby stars like Alpha Centauri and Sirius might be measured.

Planetary Distances and Sizes A few other points of explanation are required by our illustration: the radio announcer shown at the left is supposed to be on earth. His message, travelling at the speed of light (186,000 miles per second), will reach Mars, when nearest us, in a little over four minutes; Jupiter, when also in opposition, in 35 minutes; Saturn in more than an hour; Uranus, two and a half hours; Neptune in four hours, Pluto in six, and “P” in ten hours, more or less. The radio wave crosses the orbit of the earth, from side to side, in less than seventeen minutes; to reach the nearest of the stars, supposing its power sufficient, would take more than four years!

The mass of the sun is more than five hundred times that of its known planets and their satellites; half of the mass of these is concentrated in the huge Jupiter. Saturn is lighter than his bulk of water, and his great rings are a cloud of small flying particles—a whorl of dust. The earth is the densest of all bodies in the system, so far as we know, except for the lumps of solid iron which occasionally, as meteorites, collide with it.

In preparing the illustration at the right, it was impossible to show the sun in the foreground on the same scale as his satellites. If we represent Jupiter as a ball, six feet in diameter, the sun must be a globe of more than sixty feet; the earth one of a little less than seven inches; and the largest of the asteroids, less than half an inch across. Our own moon is shown as a mere spot; the larger moons of the outer planets exceed it in size, however.

One thing more—the distances separating these heavenly bodies. No map, and no orrery or mechanical model can show them in their proper relative sizes and distances. Scaling down the sun into a sixty-foot globe, as we have done, the earth is represented by a 6^4-inch globe at a distance of one mile and 150 feet; Jupiter is a six-foot globe six miles away; Neptune a 28-inch globe at more than thirty miles; “P,” if as predicted, must be represented by a ball nearly three feet across, located somewhere between fifty and ninety miles from the center. That is, if our model of the sun were erected in Central Park, New York, planet “P” might be between Trenton, N. J., and Philadelphia; and, for all we know, there may be planets which should be placed at Boston, Buffalo or Richmond. As for our nearest neighbors among the stars, they are drawn in, on this modest scale, to about the distance of the moon!