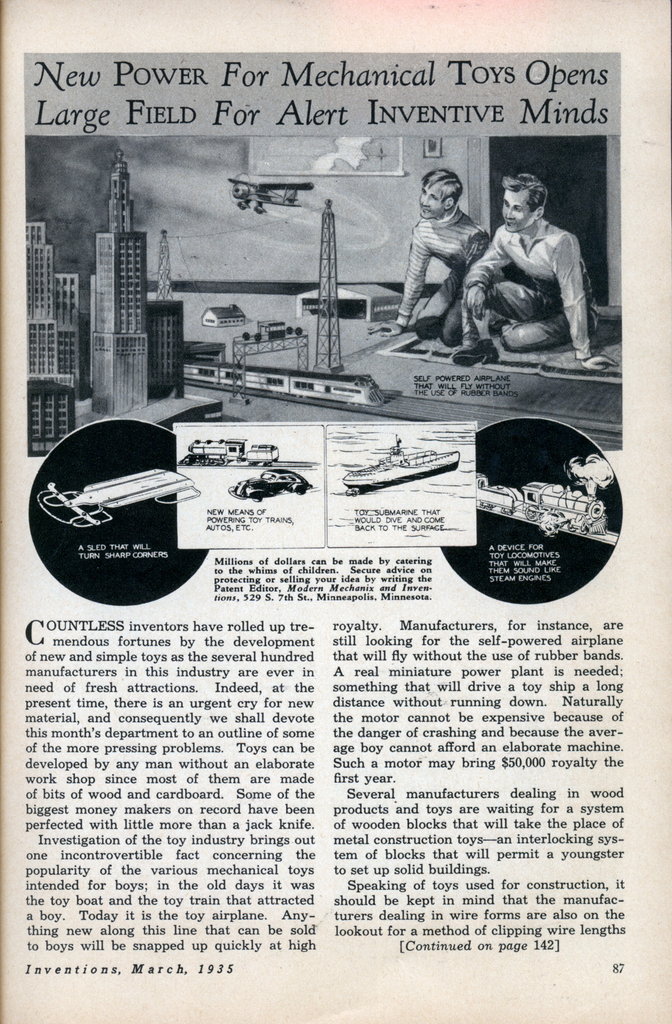 COUNTLESS inventors have rolled up tremendous fortunes by the development of new and simple toys as the several hundred manufacturers in this industry are ever in need of fresh attractions. Indeed, at the present time, there is an urgent cry for new material, and consequently we shall devote this month’s department to an outline of some of the more pressing problems. Toys can be developed by any man without an elaborate work shop since most of them are made of bits of wood and cardboard. Some of the biggest money makers on record have been perfected with little more than a jack knife.

Investigation of the toy industry brings out one incontrovertible fact concerning the popularity of the various mechanical toys intended for boys; in the old days it was the toy boat and the toy train that attracted a boy. Today it is the toy airplane. Anything new along this line that can be sold to boys will be snapped up quickly at high royalty. Manufacturers, for instance, are still looking for the self-powered airplane that will fly without the use of rubber bands. A real miniature power plant is needed; something that will drive a toy ship a long distance without running down. Naturally the motor cannot be expensive because of the danger of crashing and because the average boy cannot afford an elaborate machine. Such a motor may bring $50,000 royalty the first year.

Several manufacturers dealing in wood products and toys are waiting for a system of wooden blocks that will take the place of metal construction toysâ€”an interlocking system of blocks that will permit a youngster to set up solid buildings.

Speaking of toys used for construction, it should be kept in mind that the manufacturers dealing in wire forms are also on the lookout for a method of clipping wire lengths together enabling boys to make various articles with pieces of heavy wire cut to different lengths and angles.

The four runner sled has been a big seller for years and vast sums of money have been made with it, but sleds of this type cannot be turned abruptly enough.

The makers of carts and coasters are looking for a revolutionary spring suspension that would be cheap enough to use in connection with articles of this nature.

Who can make a device for attachment to toy steam-electric locomotives that will make them sound like real steam engines? We have the power to drive such a mechanism. All we need is the sound. It would be a big seller.

A new means of driving toy automobiles, trains and other things of this nature is needed. It may be that compressed air can be made to do the trick.

An electrically-driven captive airplane that will circle about a post, the electric feed wires holding it in position, can be sold for five dollars and it would bring in a very comfortable royalty.

A toy submarine that will periodically dive and come back to the surface would be a big seller and a real money maker. The action, unlike that in submarines which to do this, would have to be entirely automatic.

A machine gun that will fire wooden slugs from a cartridge belt-would be a fascinating toy for older boys. It should be possible to make a very simple mechanism for this purpose.