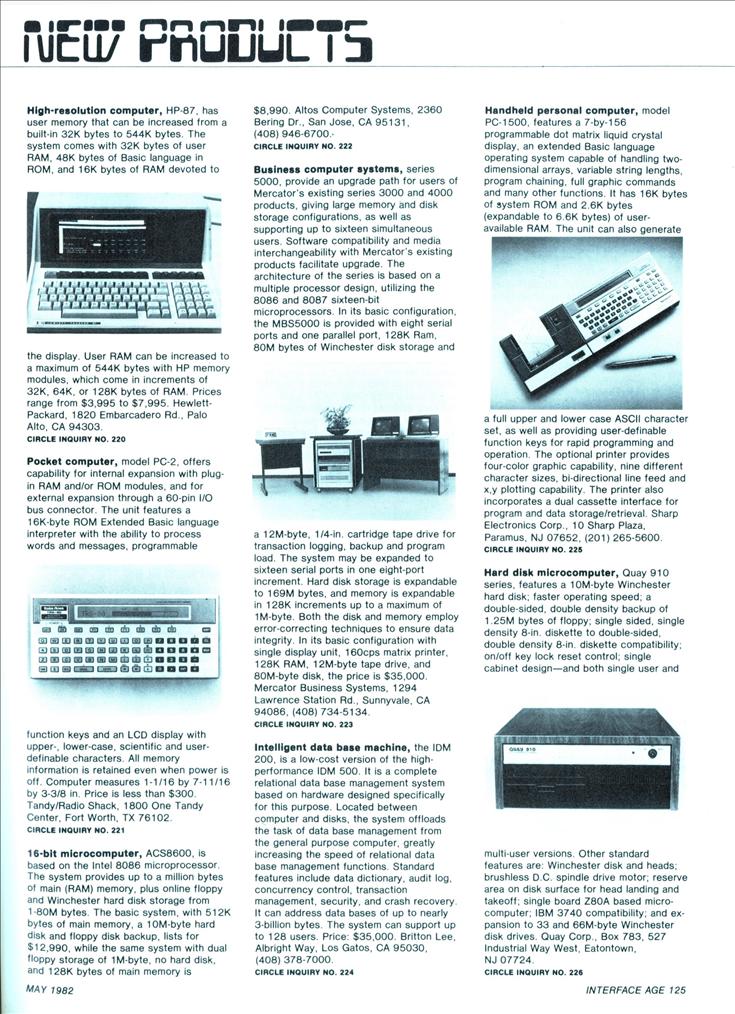 Pocket computer, model PC-2, offers capability for internal expansion with plug-in RAM and/or ROM modules, and for external expansion through a 60-pin I/O bus connector. The unit features a 16K-byte ROM Extended Basic language interpreter with the ability to process words and messages, programmable function keys and an LCD display with upper-, lower-case, scientific and user-definable characters All memory information is retained even when power is off. Computer measures 1-1/16 by 7-11/16 by 3-3/8 in. Price is less than $300. Tandy/Radio Shack, 1800 One Tandy Center, Fort Worth, TX 76102 CIRCLE INQUIRY NO. 221.

Business computer systems, series 5000, provide an upgrade path for users of Mercator’s existing series 3000 and 4000 products, giving large memory and disk storage configurations, as well as supporting up to sixteen simultaneous users. Software compatibility and media interchangeability with Mercator’s existing products facilitate upgrade. The architecture of the series is based on a multiple processor design, utilizing the 8086 and 8087 sixteen-bit microprocessors. In its basic configuration, the MBS5000 is provided with eight serial ports and one parallel port, 128K Ram, 80M bytes of Winchester disk storage and a 12M-byte, 1/4-in. cartridge tape drive for transaction logging, backup and program load. The system may be expanded to sixteen serial ports in one eight-port increment. Hard disk storage is expandable to 169M bytes, and memory is expandable in 128K increments up to a maximum of 1M-byte. Both the disk and memory employ error-correcting techniques to ensure data integrity. In its basic configuration with single display unit, 160cps matrix printer, 128K RAM, 12M-byte tape drive, and 80M-byte disk, the price is $35,000. Mercator Business Systems, 1294 Lawrence Station Rd., Sunnyvale, CA 94086, (408) 734-5134. CIRCLE INQUIRY NO. 223.

Intelligent data base machine, the IDM 200, is a low-cost version of the high-performance IDM 500. It is a complete relational data base management system based on hardware designed specifically for this purpose. Located between computer and disks, the system offloads the task of data base management from the general purpose computer, greatly increasing the speed of relational data base management functions. Standard features include data dictionary, audit log, concurrency control, transaction management, security, and crash recovery. It can address data bases of up to nearly 3-billion bytes. The system can support up to 128 users. Price: $35,000. Britton Lee, Albright Way, Los Gatos, CA 95030, (408) 378-7000. CIRCLE INQUIRY NO. 224.

Desktop computer, model JD-850M, has been developed to cover a wide range of business applications by making it possible to use with a large variety of software currently available on the world market. It can serve on its own or as an on-line terminal for other computers. Features include a separate-type keyboard with an improved key arrangement, a 12-in., non- glare CRT display, two 8-in. double-sided floppy disk drives, an optional parallel interface, GP-IB (IEEE-488), a magnetic tape for memory back-up, and an optional buzzer and interval timer device for operating ease. It can be programmed with a Basic interpreter, a Basic compiler or an 8085 Assembler. Price: $8,000. Panasonic, One Panasonic Way, Secaucus, NJ 07094, (201) 348-5337.

CP/M-compatible system is a multiuser, multiprocessor, multitasking unit, complete with an uninterruptable power supply. It can eliminate computer down time due to short-term power interruptions, electrical powerline transients, voltage spikes—even lightening. Power is maintained for up to 20 minutes without A.C. input. The Zeus II power supply, which consists of batteries, a battery charger, and a set of D.C.-to-D.C. converters that produce all internal D C. voltages, is located in one of the stackable modules which form the computer. Modular form allows for custom configurations for each application. Hard disk storages from 34M bytes to 600M bytes are available along with a 20M-byte cartridge drive for backup. OSM Computer Corp., 2364 Walsh Ave., Santa Clara, CA 95051, (800) 538-5120.

Portable terminal system produces print copy at 120 characters-per-second. Execuport 4120 has a 16-element columnar printhead that produces virtually solid, high resolution characters and permits printing below the line with no paper movement and no decrease in throughput speed. It is equipped with two character fonts, 9 by 11-in. and 5 by 7-in. The terminal system can also be customized to reproduce such specialized character sets as Japanese (Katakana), Arabic, Greek and Italic. Computer Transceiver Systems, Box 15, East 66 Midland Ave., Paramus, NJ 07652, (201) 261-6800. CIRCLE INQUIRY NO. 232.

Upgrade board set for the TRS-80 model II provides it with 16-bit, dual-processor, multi-user power. The model 16 Enhancement Option gives Model II owners all of the advantages of a Motorola MC68000 16-bit CPU with 128K bytes of user memory, including dual processors (MC68000 and Z80A), a multi-user operating system for simultaneous program execution, increased addressable memory (up to 256K) and faster operation with model 16 software Price: $1,499 (plus installation). Tandy/Radio Shack, 1800 One Tandy Center, Fort Worth, TX 76102, (817) 390-3300.

Portable terminal, Hotline, for the home and business market can be used to transmit and retrieve information from data bases as varied as a personal telephone directory to the New York Stock Exchange The terminal measures 1-5/8-in. by 3-9/16-in. by 6-3/4-in. and weighs less than 11 ounces, providing a truly portable means to communicate with host computer systems. The terminal combines a built-in modem with more familiar features, including an alphanumeric keyboard. The tactile keyboard consists of 43 functional keys arranged in typewriter sequence and provides a 64 upper case ASCII character set. The display is a 16-character fluorescent display, which is tilted for easy viewing. The terminal offers a 96-character display memory, which can be scrolled 16 characters at a time, and a 16-character display memory in the transmit mode. Price: under $400 Axlon, 170 N. Wolfe Rd„ Sunnyvale, CA 94086, (408) 730-0216. CIRCLE INQUIRY NO. 234.

8.4M-byte hard disk memory eliminates the need for repetitive handling of floppy disks when using different programs, since multiple programs can reside simultaneously in the hard disk system. The system incorporates Radio Shack’s TRSDOS operating system, making it immediately compatible with most existing TRS-80 model II software. All current TRSDOS library commands are available, plus two new utilities—Save and Restore. The Save utility saves data from the hard disk onto one or more back-up floppy disks; Restore writes data from a floppy disk onto the hard disk. The system incorporates two 8-in. platters, permanently sealed in a dust-free environment. Both surfaces of each platter are accessed by their own read/write heads Winchester technology assures extremely fast read/write times and highspeed data transfer. Price: $4,495. Tandy/Radio Shack, 1800 One Tandy Center, Fort Worth, TX 76102.