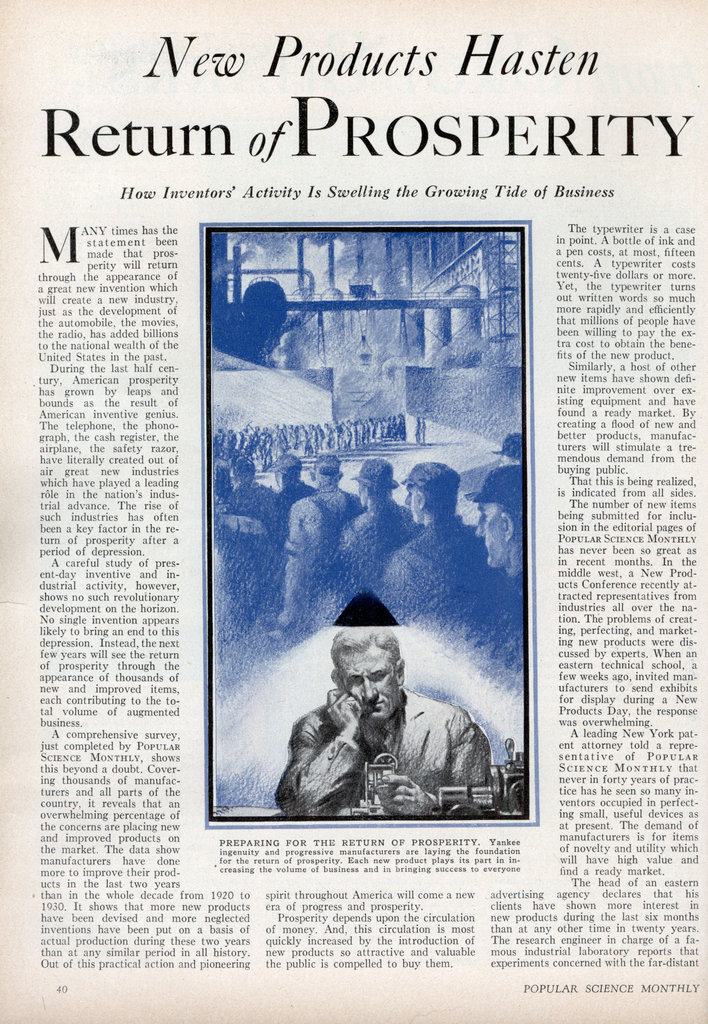 How Inventors’ Activity Is Swelling the Growing Tide of Business MANY times has the statement been made that prosperity will return through the appearance of a great new invention which will create a new industry just as the development of the automobile, the movies, the radio, has added billions to the national wealth of the United States in the past.

During the last half century, American prosperity has grown by leaps and bounds as the result of American inventive genius. The telephone, the phonograph, the cash register, the airplane, the safety razor, have literally created out of air great new industries which have played a leading role in the nation’s industrial advance. The rise of such industries has often been a key factor in the return of prosperity after a period of depression.

A careful study of present-day inventive and industrial activity, however, shows no such revolutionary development on the horizon. No single invention appears likely to bring an end to this depression. Instead, the next few years will see the return of prosperity through the appearance of thousands of new and improved items, each contributing to the total volume of augmented business.

A comprehensive survey, just completed by Popular Science Monthly, shows this beyond a doubt. Covering thousands of manufacturers and all parts of the country, it reveals that an overwhelming percentage of the concerns are placing new and improved products on the market. The data show manufacturers have done more to improve their products in the last two years than in the whole decade from 1920 to 1930. It shows that more new products have been devised and more neglected inventions have been put on a basis of actual production during these two years than at any similar period in all history. Out of this practical action and pioneering spirit throughout America will come a new era of progress and prosperity.

Prosperity depends upon the circulation of money. And, this circulation is most quickly increased by the introduction of new products so attractive and valuable the public is compelled to buy them.

The typewriter is a case in point. A bottle of ink and a pen costs, at most, fifteen cents. A typewriter costs twenty-five dollars or more. Yet, the typewriter turns out written words so much more rapidly and efficiently that millions of people have been willing to pay the extra cost to obtain the benefits of the new product.

Similarly, a host of other new items have shown definite improvement over existing equipment and have found a ready market. By creating a flood of new and better products, manufacturers will stimulate a tremendous demand from the buying public.

That this is being realized, is indicated from all sides.

The number of new items being submitted for inclusion in the editorial pages of Popular Science Monthly has never been so great as in recent months. In the middle west, a New Products Conference recently attracted representatives from industries all over the nation. The problems of creating, perfecting, and marketing new products were discussed by experts. When an eastern technical school, a few weeks ago, invited manufacturers to send exhibits for display during a New Products Day, the response was overwhelming.

A leading New York patent attorney told a representative of Popular Science Monthly that never in forty years of practice has he seen so many inventors occupied in perfecting small, useful devices as at present. The demand of manufacturers is for items of novelty and utility which will have high value and find a ready market.

The head of an eastern advertising agency declares that his clients have shown more interest in new products during the last six months than at any other time in twenty years. The research engineer in charge of a famous industrial laboratory reports that experiments concerned with the far-distant future are being shelved while the staff of experts under his direction concentrates upon improvements and innovations which can be placed upon the market at once.

An association of more than 800 manufacturers recently made a survey of its members to see what steps they were taking for a return of prosperity. The number who were turning to new products ranged in the various classifications of the industries, from fifty to ninety percent of the concerns.

Other trade groups tell the same story. When interviewed recently, the secretary of one national association of manufacturers concerned with home equipment, said: “It is safe to say that our members are marketing four times as many new products now as they were in 1928.”

The statistician of another home product manufacturer’s association reported: “There have been more new and improved appliances in our field during the past two years than made their appearance in the dozen years that went before.”

And the head of a national group of motor car manufacturers declared: “There have been more innovations, changes, and improvements in automobiles and automobile equipment during 1931 and 1932 than there were in the whole decade which preceded those years.”

An organization which specializes in introducing new products into department and chain stores has made a special check upon the number of such products appearing in different years. It has 1,500 stores in the United States and Canada as its clients. The result of its check shows that the last six months have seen the greatest flood of small, ingenious, new items issuing from American factories that the concern has ever experienced in its entire history of marketing such new products.

Another company in the middle west makes a business of placing new inventions with manufacturers looking for new products in their particular fields. Recently, 336 inquiries were received from such manufacturers concerning items which appeared in a single bulletin sent out by the organization. This record number of requests for more information, indicates the keen interest and increased activity among companies in connection with new and improved products.

“Any company,” a noted industrialist told several hundred manufacturers at a convention not long ago, “which does not keep up its product development is riding for a fall.”

Industry is awake to the fact that it is the new, the novel, the improved product that will sell today. The following is quoted from the official publication of the leading trade association in the United States: “Industry may have slowed down its production, business its pace. But there is no slackening of interest among business men in new and useful products and processes.

“Despite the depression, the flow of new products and processes in industry continues unabated. To them, many established companies are turning in an effort to put idle plant capacity to use.”

How necessity has proved the mother of invention and the manner in which depressions have increased the number of patents applied for in the past is shown by a glance at the records.

However, the number of new ideas finding their way from the workshop and laboratory to actual production in factories and sale in stores is greater during the present months than during any previous period of depression.

Yankee ingenuity and progressive manufacturers are laying the foundation for the return of prosperity.

A glance at the patent records of the world gives an interesting sidelight upon the relation of improved products and prosperity. It is not just a happen-so that in the United States, where wealth has increased most rapidly, innovators have been most active. From the beginning of the patent records in each country to the end of 1930, the totals in the four leading nations are: 825,882 for France, 754,-054 for England, 531,681 for Germany and 1,797,380 for the United States. The seventy foreign nations which issue patents have a grand total of 4,395.493. Thus, busy American inventors, alone, hold more than one-fourth of all the patents in the world.

With more than 100,000 American manufacturers alert for new ideas and watching for improved products which they can add to their lines, the tide of newly-marketed items is steadily rising. Each new product, with greater eye or utility appeal, plays its part in increasing the volume of business and in producing prosperity for all.

While the general public watches for some spectacular single invention to pull the country out of the depression, thousands of small, unnoticed, useful innovations are lifting it toward prosperity.