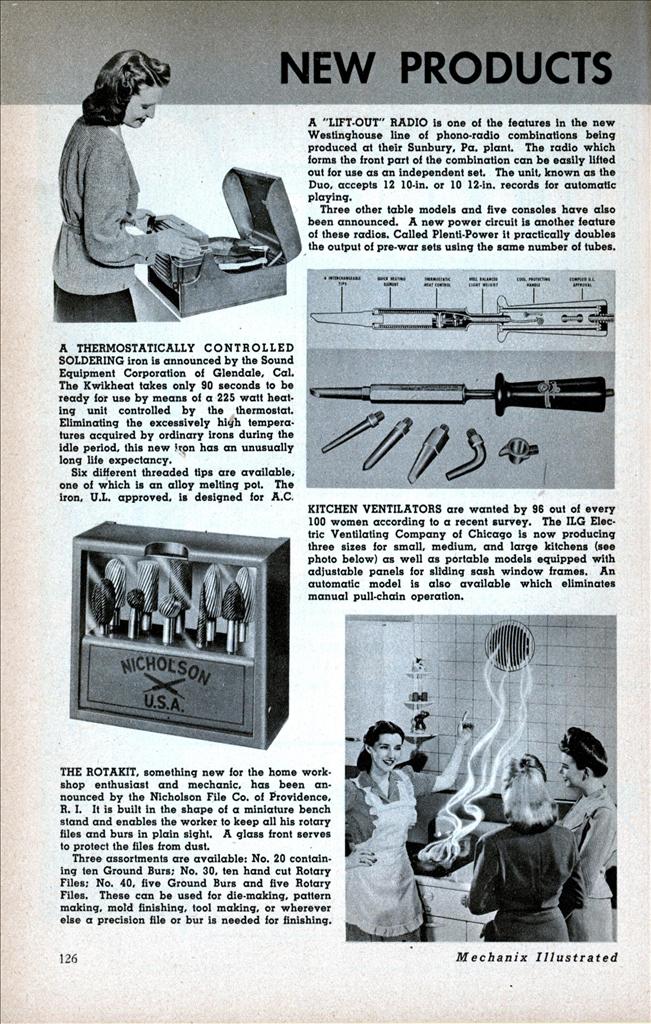 A THERMOSTATICALLY CONTROLLED SOLDERING iron is announced by the Sound Equipment Corporation of Glendale, Cal. The Kwikheat takes only 90 seconds to be ready for use by means of a 225 watt heating unit controlled by the thermostat. Eliminating the excessively high temperatures acquired by ordinary irons during the idle period, this new iron has an unusually long life expectancy.

Six different threaded tips are available, one of which is an alloy melting pot. The iron, U.L. approved, is designed for A.C.

THE ROTAKIT, something new for the home workshop enthusiast and mechanic, has been announced by the Nicholson File Co. of Providence, R. I. It is built in the shape of a miniature bench stand and enables the worker to keep all his rotary files and burs in plain sight. A glass front serves to protect the files from dust.

Three assortments are available: No. 20 containing ten Ground Burs; No. 30, ten hand cut Rotary Files; No. 40, five Ground Burs and five Rotary Files. These can be used for die-making, pattern making, mold finishing, tool making, or wherever else a precision file or bur is needed for finishing.

A “LIFT-OUT” RADIO is one of the features in the new Westinghouse line of phono-radio combinations being produced at their Sunbury, Pa. plant. The radio which forms the front part of the combination can be easily lifted out for use as an independent set. The unit, known as the Duo, accepts 12 10-in. or 10 12-in. records for automatic playing.

Three other table models and five consoles have also been announced. A new power circuit is another feature of these radios. Called Plenti-Power it practically doubles the output of pre-war sets using the same number of tubes.

KITCHEN VENTILATORS are wanted by 96 out of every 100 women according to a recent survey. The ILG Electric Ventilating Company of Chicago is now producing three sizes for small, medium, and large kitchens (see photo below) as well as portable models equipped with adjustable panels for sliding sash window frames. An automatic model is also available which eliminates manual pull-chain operation.

A TEN OUNCE POCKET RADIO, small enough to fit into your pocket, without crowding and measuring 3 in. wide, 6-1/4 in. high and only 3/4 in. thick is now in actual production by the Belmont Radio Corp. of Chicago. The extreme compactness of this newmidget is made possible by the use of tiny radio tubes, the same kind used in hearing aids and of the type used in the radar proximity fuse. These tubes weigh about a tenth of an ounce and have a cross section about the same as an oval cigaret. Prices for these midget sets will start at about $30; they will be available in gold, silver, two tone metal and various leathers.

A PNEUMATIC SAW designed to speed-up and simplify sawing and filing operations is now being distributed by the Air-Speed Tool Co. of Los Angeles, Calif. The saw. built to operate with about 85 pounds of pressure, has an adjustable barrel which readily permits cutting in metals or woods as well as intricate dead end, keyhole and scroll work.

Long trouble-free life is assured since the saw has only two internal operating parts. There are no gears, adaptors, or power-take-off devices.

A DE LUXE PHONOGRAPH COMBINATION housing a 14 tube chassis equipped for Frequency and Amplitude Modulation reception. Television, and Wire Recording is now being manufactured by the Lear Radio Co., of Grand Rapids, Mich. The console has a 14 inch speaker and a de luxe record changer. List prices range from $500 to $600. The modern classic lines of these consoles have been designed by a leading Grand Rapids designer.

A WASHER THAT HAS EVERYTHING INCLUDING THE KITCHEN SINK is now here due to the efforts of the Hurley Machine Co. of Chicago. The Thor Automagic washing machine does the daily dishes and the weekly washing at a selling price, according to the manufacturer, of less than many pre-war washing machines. It can be purchased as a dish washer or as a clothes washer alone and the accessories added at a later date. Eight pounds of clothes and dishes for six is the capacity of the washer. Proposed attachments will include an ice-cream freezer, a home churn, and a potato peeler.