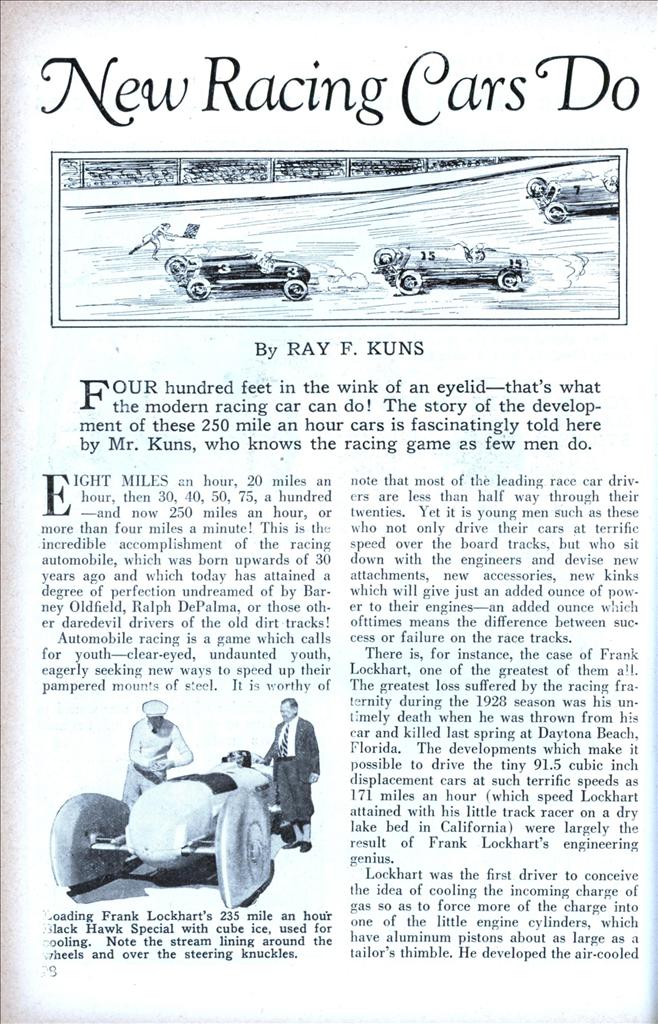 FOUR hundred feet in the wink of an eyelid—that’s what the modern racing car can do! The story of the development of these 250 mile an hour cars is fascinatingly told here by Mr. Kuns, who knows the racing game as few men do.

EIGHT MILES an hour, 20 miles an hour, then 30, 40, 50, 75, a hundred —and now 250 miles an hour, or more than four miles a minute! This is the incredible accomplishment of the racing automobile, which was born upwards of 30 years ago and which today has attained a degree of perfection undreamed of by Barney Oldfield, Ralph DePalma, or those other daredevil drivers of the old dirt tracks! Automobile racing is a game which calls for youth—clear-eyed, undaunted youth, eagerly seeking new ways to speed up their pampered mounts of steel. It is worthy of note that most of the leading race car drivers are less than half way through their twenties. Yet it is young men such as these who not only drive their cars at terrific speed over the board tracks, but who sit down with the engineers and devise new attachments, new accessories, new kinks which will give just an added ounce of power to their engines—an added ounce which ofttimes means the difference between success or failure on the race tracks.

There is, for instance, the case of Frank Lockhart, one of the greatest of them a]l. The greatest loss suffered by the racing fraternity during the 1928 season was his untimely death when he was thrown from his car and killed last spring at Daytona Beach, Florida. The developments which make it possible to drive the tiny 91.5 cubic inch displacement cars at such terrific speeds as 171 miles an hour (which speed Lockhart attained with his little track racer on a dry lake bed in California) were largely the result of Frank Lockhart’s engineering genius.

Lockhart was the first driver to conceive the idea of cooling the incoming charge of gas so as to force more of the charge into one of the little engine cylinders, which have aluminum pistons about as large as a tailor’s thimble. He developed the air-cooled intake manifold and used it for almost a year before secret of his amazing speed leaked out.

Lockhart also built his own superchargers, which are used to force the gasoline charge into the cylinders.

He found that the centrifugal force of the weight of a steel impeller was sufficient to stretch the steel blades an eighth of an inch in length and thus wreck the whole device. He found that duralumin was the only metal which would stand up at the tremendous speeds he demanded of his product; over 40,000 revolutions per minute, which would mean a point on the edge of the impeller would travel at the terrific rate of 17 miles a minute.

In his tests with the supercharger, Lockhart found that only certain types of ball bearings would stand the strain. He also found that one of the most popular of the six-cylinder automobile engines, did not develop enough power to drive the impeller alone at the rate he desired. Yet by the aid of the supercharger he was able to develop almost 200 horse power from eight cylinders and a displacement of 91.5 cu. in.

In his Daytona Beach Black Hawk Special Stutz racing car, Lockhart had what was admittedly the fastest car ever built. When laying out this car he built a model, exact in all details of contour, and took it to the Wright Field at Dayton, Ohio, and tested it in the wind tunnels at rates up to an 1 above 200 miles per hour. After a numb:r of tests and changes, he developed the streamlining used in the racer which has an unofficial record of over 225 miles per hour.

The engine for this Stutz Black Hawk was a combination of the two used in Lock-hart’s regular racing cars. It was a sixteen cylinder job. The two crank shafts were used in one crank case. Each crank had a large gear fitted to its front end, which in turn was fitted to another gear which was on the propeller or drive shaft in the crankcase. This shaft was located at lower center and went back to the clutch shaft.

The job was ice cooled. The 80 pounds of ice was sufficient for the tests which were run. The entire length of the run was about nine miles. Four miles to gain speed, one mile measured course over which the car was electrically timed by the A. A. A. racing committee, and four miles in which to slow down and turn. Two superchargers were used. The air from the superchargers was cooled before induction into the engine.

Lockhart claimed that his superchargers would give an effective pressure (above atmospheric pressure) of 27 pounds per inch.

A youngster without engineering training of the catalogued type, Frank Lockhart developed himself and his loved racing cars to a high degree of efficiency. About a year ago he went with the Stutz factory as an engineer. There with his own equipment and own mechanics he “‘set up shop.” His loss is a great one. He gave his best. He contributed more in his short racing career to scientific knowledge of methods of overcoming wind resistance in automobiles and putting power into engines, than most engineers do in a lifetime.

Daytona Beach, where Lockhart was killed, is the favorite speed track of the world’s best drivers. Malcolm Campbell, an Englishman, came over with his great Bluebird car and set up an average speed of 206 miles an hour. Campbell built his car himself. The Bluebird is a 900 horsepower machine with several novel features which may best be explained by the diagram on page 101.

Another unusual racing car is the Triplex Special, built by J. M. White as a sporting venture, and driven by Ray Keech. Because it possessed no reversing gear, the Triplex was barred by the A. A. A. from participating in the official races, but the huge 36-cylinder machine set up an unofficial record of 253 miles an hour—better than four miles a minute!

There is no transmission, no rear springs, no gear shift levers in the Triplex. It is stripped down to the essentials—a power plant on four wheels. The car is direct driven from crankshaft to rear axle. It is powered with three Liberty motors, each having 12 cylinders. It develops 2,500 horsepower—contrast this with the strength of the average railway locomotive, which develops only 800 to 1,000 horsepower! The motors turn over at 3,300 r. p. m. without load, a speed equivalent to 375 miles an hour.

In his Black Hawk Special, Frank Lockhart attained 235 miles an hour. The Englishman, Colonel Segrave, attained 204 miles an hour last year with his 1,000 horsepower Sunbeam. These speeds, of course, were only maintained for a few miles. In the Indianapolis speedway races the 500 mile jaunt is usually negotiated at an average rate of 100 miles an hour. Racing is a young man’s game, with the emphasis on the young and again on the man. A young fellow may enter it with little in a monetary way if he has the requisites of steady nerve, strong physique, brains in an automotive way and an indomitable spirit of never quitting, and have a fair assurance of success.