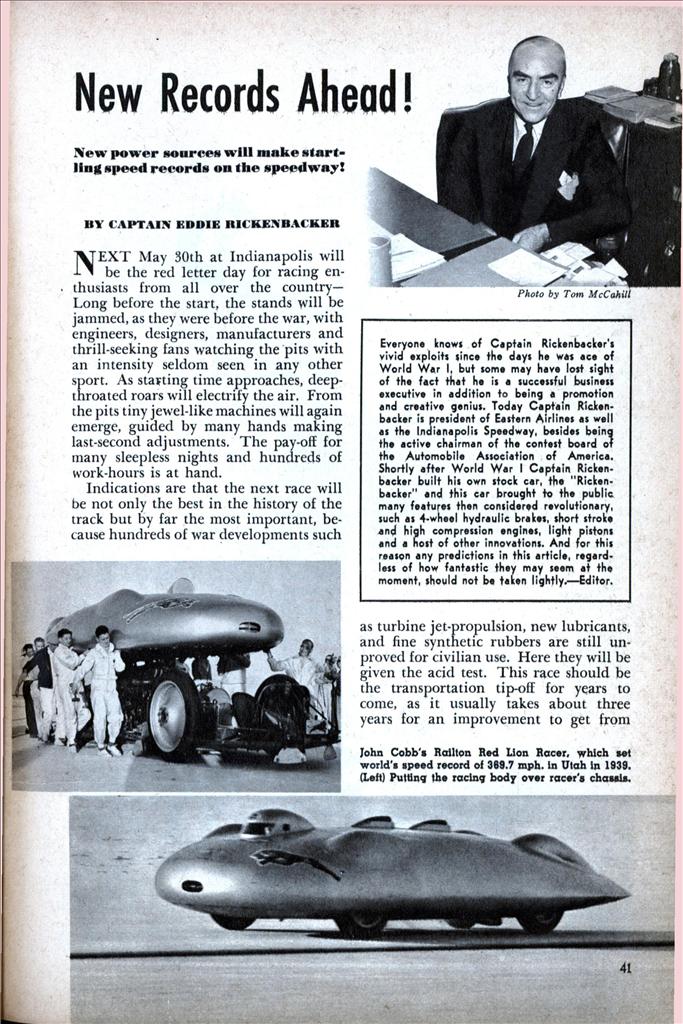 Everyone knows of Captain Rickenbacker’s vivid exploits since the days he was ace of World War I, but some may have lost sight of the fact that he is a successful business executive in addition to being a promotion and creative genius. Today Captain Rickenbacker is president of Eastern Airlines as well as the Indianapolis Speedway, besides being the active chairman of the contest board of the Automobile Association of America. Shortly after World War I Captain Rickenbacker built his own stock car, the “Rickenbacker” and this car brought to the public many features then considered revolutionary, such as 4-wheel hydraulic brakes, short stroke and high compression engines, light pistons and a host of other innovations. And for this reason any predictions in this article, regardless of how fantastic they may seem at the moment, should not be taken lightly.—Editor.

NEXT May 30th at Indianapolis will be the red letter day for racing enthusiasts from all over the country-Long before the start, the stands will be jammed, as they were before the war, with engineers, designers, manufacturers and thrill-seeking fans watching the pits with an intensity seldom seen in any other sport. As starting time approaches, deep-throated roars will electrify the air. From the pits tiny jewel-like machines will again emerge, guided by many hands making last-second adjustments. The pay-off for many sleepless nights and hundreds of work-hours is at hand.

Indications are that the next race will be not only the best in the history of the track but by far the most important, because hundreds of war developments such as turbine jet-propulsion, new lubricants, and fine synthetic rubbers are still unproved for civilian use. Here they will be given the acid test. This race should be the transportation tip-off for years to come, as it usually takes about three years for an improvement to get from the racing machine to the stock car. Noise has always been a big part of the Speedway. Whether it was the bell-like tone of a perfect engine screaming along the back stretch or the crescendo roar of supercharged dynamite flashing by the stands, it was unsurpassable music to the ears of the fan. The next race promises to be a combination of many sounds never blended before, for to the thunderous roar of the gasoline engines will be added the giant blow torch sounds of gas turbines and—perhaps—the rocket-like swish of jet propulsion.

Since the start of the war gas turbine engines have been developed to such a point that many of the country’s top engineers feel that this type of power will completely replace the conventional gasoline engine in stock cars before long. The gas turbine offers many important advantages over the internal combustion engine, such as at least twice the horsepower per over-all size and weight, speed and acceleration beyond anything we have known, and, above all, unequalled economy of operation.

This type of engine is usually built with only one internal moving part, which includes the air compressing and turbine blades on opposite ends of a single shaft. Compare this one part with the hundreds inside your own automobile engine and you will realize the simplicity of upkeep. For fuel the gas turbine will operate on anything from fuel oil or kerosene to gasoline and the same features that make the new Army fighting plane, the P-80 Shooting Star, outstanding will also be responsible for unheard of acceleration and top speeds in future race and passenger cars. With gas turbine engines, speeds of well over 200 miles an hour are expected on the Indianapolis straightaway with averages close to 200 for a complete lap. It was in 1914, right after Carl Fisher expressed doubt that anyone would ever complete a lap at the amazing speed of 100 miles an hour, that Julius Boillot did it. Now, 32 years later, 200 miles or better is expected with the first new type of power plant in more that half a century.

Chassis design will be greatly affected by this new type of power because of the lightness and shape of the turbine engine. In the present conventional car, the crankcase is usually the low point of clearance because of the necessity of an oil reservoir below the crankshaft and main bearings. The turbine without a crankcase will permit engineers to build chassis with a much lower center of gravity and this will vastly increase the roadability of all cars, especially the light ones. The turbine eliminates the ignition and cooling systems, and the actual r.p.m.’s of the engine are instantly controlled by the opening and closing of the throttle, because such factors as automatic spark advance and acceleration pumps have been eliminated, making maximum power almost instantaneous when desired. This will account for almost fantastic acceleration after rounding a turn on the Speedway or getting a green light in a passenger car. It is also felt in some automobile circles that because of the turbine’s flexibility, clutches and transmissions, except for a reverse gear, will be completely eliminated; this should vastly reduce the cost of a vehicle [Continued on page 77] and simplify servicing. Nearly all automotive turbine plans to date call for a turbine engine conventionally driving through the wheels and not following the aircraft practice of forcing expanded gases against normal atmospheric pressure for a propelling force.

The aircraft type of turbine-driven jet-propulsion for automobiles seems far distant because there are many problems that must be solved before this type of drive car be made possible. One of the most difficult of these is providing a suitable method of reversing. All jet-propelled machines to date have a fixed outlet which cannot be reversed. There has been some thought about shunting the blast through a front jet for reversing, but up to this writing nothing has been perfected along these lines. In stock cars the reverse gear is usually the most powerful; if this is to be equalled in a jet car, the forward outlet would have to be equally as large and as efficient as the regular driving jet and this would involve new design problems never considered before. Assuming that the reversing problem can be overcome, another of equal difficulty is the effect of the jet blast on cars or people behind it. On dirt or gravel roads, quick acceleration or high speed might prove extremely dangerous to any car and its occupants behind, because loose stones or rocks could easily be thrown back at near-bullet speed by the powerful driving blast. Another dangerous factor would be the traffic or parking menace. Junior standing near the curb might be tossed into the nearest tree top by the air blast of one of these cars starting off in a burst of speed.

Today, jet propulsion is excellent when confined to flying power; but at present, if it is used in too close contact with other objects, it might resemble a maniac in a jammed subway carrying a blow-torch.

Progress at the Speedway however won’t stop with perfected turbines or jet propelled cars. As this is being written, the possibilities of harnessing the atom are being explored. Some scientists foresee a factory-sealed atomic power unit, the size of a hat box, that will last the life of the car because of the concentrated properties of the atom. This would call for another type of power plant far beyond the conception of most of us, but the thought of driving from coast to coast or from Alaska to the Argentine with built-in and inexhaustible power fires the imagination. As yet atomic automotive power is still in the dream stage; but when it does become a reality, the chances are you’ll read about it first under an Indianapolis May 30th date line.