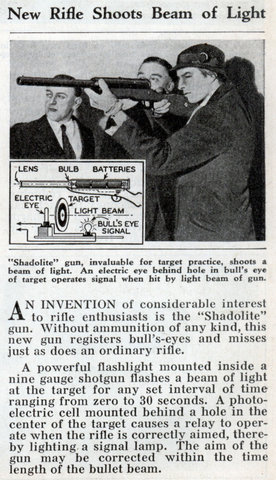 AN INVENTION of considerable interest to rifle enthusiasts is the “Shadolite” gun. Without ammunition of any kind, this new gun registers bull’s-eyes and misses just as does an ordinary rifle.

A powerful flashlight mounted inside a nine gauge shotgun flashes a beam of light at the target for any set interval of time ranging from zero to 30 seconds. A photoelectric cell mounted behind a hole in the center of the target causes a relay to operate when the rifle is correctly aimed, thereby lighting a signal lamp. The aim of the gun may be corrected within the time length of the bullet beam.