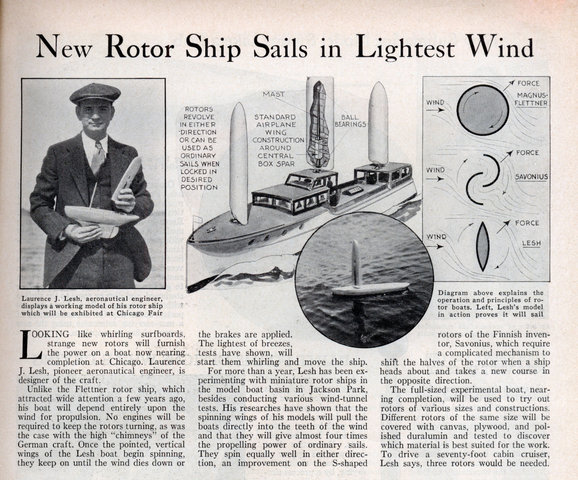 LOOKING like whirling surfboards, strange new rotors will furnish the power on a boat now nearing completion at Chicago. Laurence J. Lesh, pioneer aeronautical engineer, is designer of the craft.

Unlike the Flettner rotor ship, which attracted wide attention a few years ago, his boat will depend entirely upon the wind for propulsion. No engines will be required to keep the rotors turning, as was the case with the high “chimneys” of the German craft. Once the pointed, vertical wings of the Lesh boat begin spinning, they keep on until the wind dies down or the brakes are applied. The lightest of breezes, tests have shown, will start them whirling and move the ship. For more than a year, Lesh has been experimenting with miniature rotor ships in the model boat basin in Jackson Park, besides conducting various wind-tunnel tests. His researches have shown that the spinning wings of his models will pull the boats directly into the teeth of the wind and that they will give almost four times the propelling power of ordinary sails. They spin equally well in either direction, an improvement on the S-shaped rotors of the Finnish inventor, Savonius, which require a complicated mechanism to shift the halves of the rotor when a ship heads about and takes a new course in the opposite direction.

The full-sized experimental boat, nearing completion, will be used to try out rotors of various sizes and constructions. Different rotors of the same size will be covered with canvas, plywood, and polished duralumin and tested to discover which material is best suited for the work. To drive a seventy-foot cabin cruiser, Lesh says, three rotors would be needed.