Modern Mechanix
Issue: Jul, 1934
Posted in: Sign of the Times
3 Comments on NEW SCIENTIFIC MARVELS OF The WORLD’S FAIR (Jul, 1934) 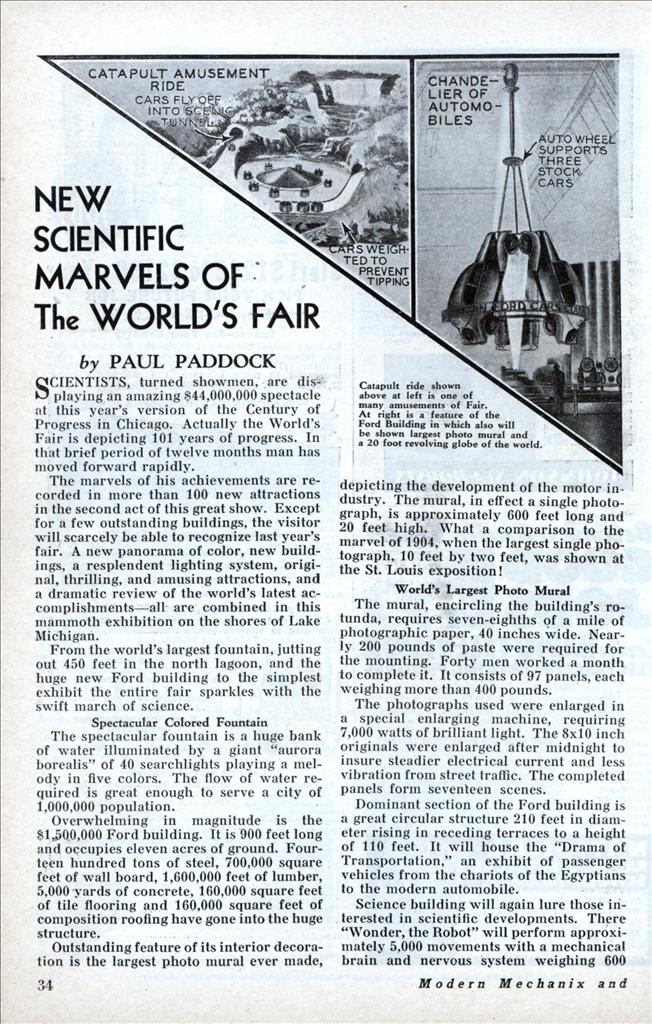 SCIENTISTS, turned showmen, are displaying an amazing $44,000,000 spectacle at this year’s version of the Century of Progress in Chicago. Actually the World’s Fair is depicting 101 years of progress. In that brief period of twelve months man has moved forward rapidly.

The marvels of his achievements are recorded in more than 100 new attractions in the second act of this great show. Except for a few outstanding buildings, the visitor will scarcely be able to recognize last year’s fair. A new panorama of color, new buildings, a resplendent lighting system, original, thrilling, and amusing attractions, and a dramatic review of the world’s latest accomplishments—all are combined in this mammoth exhibition on the shores of Lake Michigan.

From the world’s largest fountain, jutting out 450 feet in the north lagoon, and the huge new Ford building to the simplest exhibit the entire fair sparkles with the swift march of science.

Spectacular Colored Fountain The spectacular fountain is a huge bank of water illuminated by a giant “aurora borealis” of 40 searchlights playing a melody in five colors. The flow of water required is great enough to serve a city of 1,000,000 population.

Outstanding feature of its interior decoration is the largest photo mural ever made, depicting the development of the motor industry. The mural, in effect a single photograph, is approximately 600 feet long and 20 feet high. What a comparison to the marvel of 1904, when the largest single photograph, 10 feet by two feet, was shown at the St. Louis exposition!

World’s Largest Photo Mural The mural, encircling the building’s rotunda, requires seven-eighths of a mile of photographic paper, 40 inches wide. Nearly 200 pounds of paste were required for the mounting. Forty men worked a month to complete it. It consists of 97 panels, each weighing more than 400 pounds.

The photographs used were enlarged in a special enlarging machine, requiring 7,000 watts of brilliant light. The 8×10 inch originals were enlarged after midnight to insure steadier electrical current and less vibration from street traffic. The completed panels form seventeen scenes.

Dominant section of the Ford building is a great circular structure 210 feet in diameter rising in receding terraces to a height of 110 feet. It will house the “Drama of Transportation,” an exhibit of passenger vehicles from the chariots of the Egyptians to the modern automobile.

Science building will again lure those interested in scientific developments. There “Wonder, the Robot” will perform approximately 5,000 movements with a mechanical brain and nervous system weighing 600 pounds and containing 3,000 pieces. With a face composed of surgeon’s rubber bandage material “Wonder” can realistically talk, smile, and express emotions. Robot’s “nervous” system is a section of steel tubing perforated with 4,500 tiny holes. As the tube turns, the holes make and break electrical contacts which operate the robot’s lips, hands, and other parts.

For those interested in amusing and thrilling rides and shows, the Midway, moved over to the island to allow space for the fair’s many new villages, provides almost endless hours of fun. There is the whirling merry-go-round that catapults heavily weighted cars up an incline into a scenic tunnel. Another ride shoots cars down an incline. They make three sensational half loops before coming to a landing, combining the thrills of ferris wheel, coaster, and rocket car.

Outstanding amusement attraction is “Adventureland,” an application of science and showmanship to the field of enchantment. There children will find themselves walking through a forest of laughing and winking trees, darting long tongues at the young visitors. A fairy queen, scarcely three inches high, will move about in a bowl swarming with live fish. The phenomenon is accomplished by means of mirrors that reflect into the bowl an image of a young lady performing her act in a hidden section underneath. A stick of candy wind tunnel, talking lollypops, jumping jack brownies, and blowing elves, operated by electric eye beams, are among the many features of this romantic playground.

Diners can enjoy their food at the fair while watching a beautiful Polynesian prin-(Continued on page lb3) cess throw herself into the mouth of a flaming volcano as a sacrifice to the gods. The volcano replaces the A. & P. carnival of 1933 and will provide a background for a Hawaiian garden seating 1,500 diners. A combination of smudge pots, electrical lighting, and rubber sponges, resembling rocks, have been ingeniously used in producing the volcano sensation.

Among the features shown on the lagoon is a radio controlled boat maneuvered at the will of an operator on shore. There, too, is the water theatre, with its “floating” stage, terraces, and restaurants.

Huge Patent and Model Display Inventors can enjoy a huge patent and model display in the Travel and Transport buildings. It features early and modern inventions. Amateur photographers will want to see the latest wonders of cinema and still photography and listen to helpful lectures in the Hall of Photography in the Science building.

Home lovers will want to see the Crystal House, made of glass panels with a prefabricated steel frame. The ground floor walls are of light-diffusing glass through which persons outside can not view the occupants within. The upper floors are of transparent plate glass. All equipment and furnishing are examples of the latest developments for home comfort.

For the first time the public is able to hear and see those messages from unknown worlds, the cosmic ray, trapped and harnessed in an apparatus called the hodoscope. Only two of these instruments exist in the world. The hodoscope, converting the mysterious rays into electricity and light, suggests that man may derive a practical use from this adventure into a scientific wonderland.

Practically all basic science exhibits have been changed or improved. One interesting section is devoted to models showing the fallacy of man’s dream of perpetual motion. Another sh6ws models of string, illustrating geometric and other mathematical principles.

Free Scientific “Circus” Shown In the great court of the Hall of Science a daily free scientific “circus” is being presented. At the east end of the court a huge stage has been erected and 10,000 free seats provided. Two huge screens show scientific films and television, while a complete radio station can be wheeled upon the stage to communicate with sixty different countries.

On a platform on one side of the stage a reflecting telescope will nightly capture the light rays from the star Arcturus. The ray will then light the Century of Progress beacon, a huge torch of gas flame.

These are but a few of the outstanding attractions of the World’s Fair. No short article can do justice to that great panorama of marvels being unfolded on Chicago’s lake front.