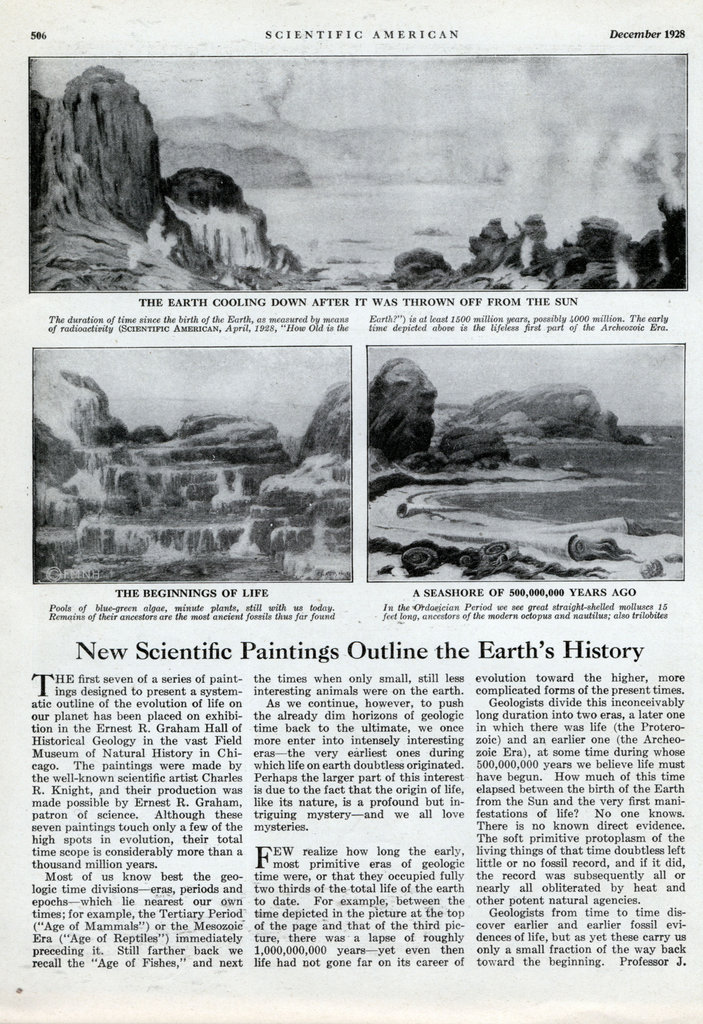 THE first seven of a series of paintings designed to present a systematic outline of the evolution of life on our planet has been placed on exhibition in the Ernest R. Graham Hall of Historical Geology in the vast Field Museum of Natural History in Chicago. The paintings were made by the well-known scientific artist Charles R. Knight, and their production was made possible by Ernest R. Graham, patron of science. Although these seven paintings touch only a few of the high spots in evolution, their total time scope is considerably more than a thousand million years.

Most of us know best the geologic time divisions—eras, periods and epochs—which lie nearest our own times; for example, the Tertiary Period (“Age of Mammals,,) or the Mesozoic Era (“Age of Reptiles”) immediately preceding it. Still farther back we recall the “Age of Fishes,” and next the times when only small, still less interesting animals were on the earth. As we continue, however, to push the already dim horizons of geologic time back to the ultimate, we once more enter into intensely interesting eras—the very earliest ones during which life on earth doubtless originated. Perhaps the larger part of this interest is due to the fact that the origin of life, like its nature, is a profound but intriguing mystery—and we all love mysteries.

» FEW realize how long the early, most primitive eras of geologic time were, or that they occupied fully two thirds of the total life of the earth to date. For example, between the time depicted in the picture at the top of the page and that of the third picture, there was a lapse of roughly 1,000,000,000 years—yet even then life had not gone far on its career of evolution toward the higher, more complicated forms of the present times.

Geologists divide this inconceivably long duration into two eras, a later one in which there was life (the Proterozoic) and an earlier one (the Archeozoic Era), at some time during whose 500,000,000 years we believe life must have begun. How much of this time elapsed between the birth of the Earth from the Sun and the very first manifestations of life? No one knows. There is no known direct evidence. The soft primitive protoplasm of the living things of that time doubtless left little or no fossil record, and if it did, the record was subsequently all or nearly all obliterated by heat and other potent natural agencies.

Geologists from time to time discover earlier and earlier fossil evidences of life, but as yet these carry us only a small fraction of the way back toward the beginning. Professor J, W. Gruner of the University of Minnesota has discovered, in rocks of late Archeozoic Age, certain microscopic fossils of something resembling the modern blue-green algae which a student’s microscope will reveal today in many samples of pond water. Even these and similar evidences have, however, been called in question by Professor J. E. Hawley of the University of Wisconsin who asks us at least to investigate the possibility that they are merely chemical manifestations like those called “imitations of life” which can easily be “created” by mixing ferrous sulfide and water glass, and which exhibit many of the characteristics of living matter but do not live. Indirect evidence—the widespread presence of graphite in metamorphosed rocks of Canada; the presence of red (oxidized) sediments proving the existence of oxygen available for life, and other indications discussed in geologies (Schuchert’s “Historical Geology,” for example)—more than hint that life abounded in and during many of the 500,000,000 years of the Archeozoic Era which are such a mystery and a challenge to us. But such indirect evidences are not the kind that satisfy. How did life start and what is it? For both of these questions there are scores of hypotheses but little conclusive proof. What science seeks is not more hypotheses but some kind of direct, conclusive, fossil evidence. This we may never succeed in finding.