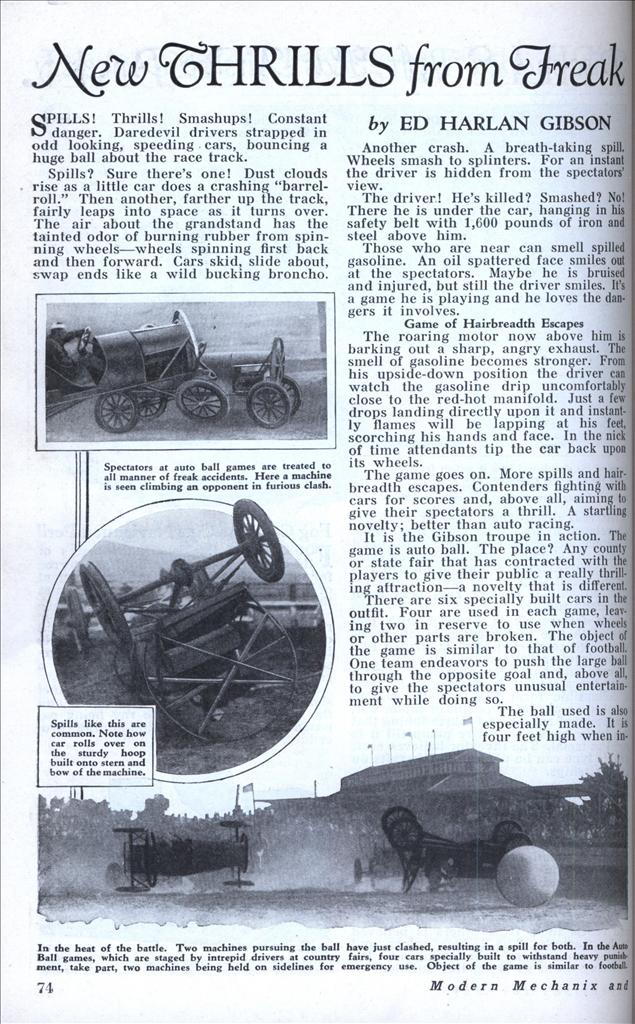 Spills? Sure there’s one! Dust clouds rise as a little car does a crashing “barrel-roll.” Then another, farther up the track, fairly leaps into space as it turns over. The air about the grandstand has the tainted odor of burning rubber from spinning wheelsâ€”wheels spinning first back and then forward. Cars skid, slide about, swap ends like a wild bucking broncho.

Another crash. A breath-taking spill. Wheels smash to splinters. For an instant the driver is hidden from the spectators’ view.

The driver! He’s killed? Smashed? No! There he is under the car, hanging in his safety belt with 1,600 pounds of iron and steel above him.

Those who are near can smell spilled gasoline. An oil spattered face smiles out at the spectators. Maybe he is bruised and injured, but still the driver smiles. It’s a game he is playing and he loves the dangers it involves.

Game of Hairbreadth Escapes The roaring motor now above him is barking out a sharp, angry exhaust. The smell of gasoline becomes stronger. From his upside-down position the driver can watch the gasoline drip uncomfortably close to the red-hot manifold. Just a few drops landing directly upon it and instantly flames will be lapping at his feet, scorching his hands and face. In the nick of time attendants tip the car back upon its wheels.

The game goes on. More spills and hairbreadth escapes. Contenders fighting with cars for scores and, above all, aiming to give their spectators a thrill. A startling novelty; better than auto racing.

It is the Gibson troupe in action. The game is auto ball. The place? Any county or state fair that has contracted with the players to give their public a really thrilling attractionâ€”a novelty that is different.

There are six specially built cars in the outfit. Four are used in each game, leaving two in reserve to use when wheels or other parts are broken. The object of the game is similar to that of football. One team endeavors to push the large ball through the opposite goal and, above all, to give the spectators unusual entertainment while doing so.

The ball used is also especially made. It is four feet high when in- Hated. Six plys of rubber and fabric are used in its construction which resembles that of an automobile tire. It weighs approximately seventy – five pounds. Many times these cars, weighing close to sixteen hundred pounds, are driven completely over the top of the ball without puncturing it. Again it is bounced ten to twenty feet into the air and well over the opponent’s car. This is called a kickoff.

In the course of a game accidents are constantly expected and taken merely as a matter of course. The large ball, sailing through the air, has often caught a driver unawares, knocking him completely unconscious. Again, striking the steering wheel, the ball has smashed it between the hands of the driver.

Fire Most Deadly Menace Fire is another hazard to contend with. Running wide open, the motors soon become red-hot. Then just a few drops of gasoline falling from the carburetor onto the red-hot manifold, while the car is upside down, will instantly ignite it. Breathless moments follow.

The attendant’s first thought is of the driver. With flames already spreading about the oil-covered machine, they unstrap him. This he cannot do unassisted because of his weight hanging in the belt. Airplane safety belts have been tried. The quick way of hooking them was handy; too handy, for the jarring and jolting of the body unhooked them during the game.

Fire in a night game is a spectacular sight and women in the grandstand have even fainted watching the flames enveloping the car. Thus far the driver has been removed invariably unharmed in all cases.

Experience has taught the drivers the knack of keeping their motors running in all positions, be it upside down or how. These drivers in auto ball claim a record of their own for spills, which in sport parlance means the complete overturning of the cars. In a short game of five minutes of play as many as fifteen spills have been made.

This is action in the raw. The grandstand reaction is deafening applause as only a thrill loving satisfied crowd can give.