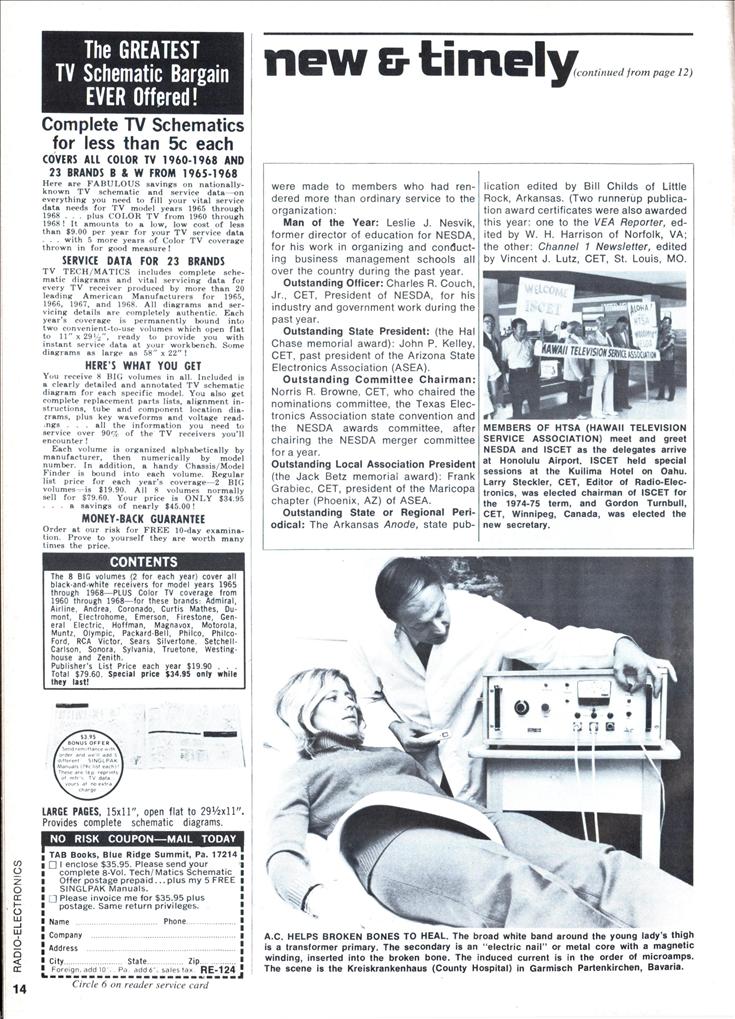 Used LP’s are also sold on consignment, at prices ranging from 25 cents to $2, depending on the record and its condition. Bread and Roses also sells records to its customers for taping (a perfectly legal process if the tape is for the customer’s personal use). If returned in mint condition, the records are repurchased by the store at 70% of the original price, and resold at a discount. As an example, a “taped” Allman Brothers double album sells for $3.70.

Other original features of the Washington store include a newsletter, a musicians’ clearing-house, and a community bulletin board.

Equipment out of warranty? New device will tell when.

A warranty is designed to protect a purchaser from innate defects or short life in the equipment he buys. But the 90-day, 1-year or even 2-year warranty often fails to protect, simply because time does not indicate usage. One television set is in use a minimum of 10 hours per day, 365 days per year (except for Leap Year). Another is used about 2 hours an evening most evenings. The first customer’s pix tube fails near the end of the second year, and the manufacturer accepts full responsibility. The second set runs one day over the two years, and the warranty is useless. Yet tube No. 1 has operated for more than 5000 hours and tube No. 2 has run less than 1500!

North American Philips Controls Corp. has just come out with a device that may be able to even out such difficulties. Somewhat reminiscent of gadgets that were introduced in the early days of hi-fi to measure the length of time a stylus had played, it shows how long a piece of equipment has been in actual use. It can be used on all types of appliances, from the lightest up to and including air conditioners.

Called an elapsed-time indicator, the device is an inch-long glass tube with metal caps. As long as current runs through it, copper builds up at one end, at a precise rate. Installed in new equipment by the manufacturer, it would cost about $1, Philips believes.

Philips has not as yet installed indicators in any appliances, but indicates interest by the very action of developing such an indicator. A spokesman for another appliance manufacturer—Whirlpool—also expressed interest and suggested that his company had also considered a similar idea.

Three persons are inducted into NESDA’s Hall of Fame.

At its Hall of Fame banquet, held during the recent annual convention in Hawaii, the National Electronic Service Dealers Association (NESDA) elected three persons to the Association’s Hall of Fame. Two of the elevations were posthumous: Hugo Gernsback, publisher, editor, author, inventor and lifetime champion of the service technician and the amateur. He founded the first radio magazine, Modern Electrics, in 1909, and subsequently the first service organization, the Official Radio Service Men’s Association (ORSMA). Later he started Radio News, and in 1929, Radio-Craft, which is now Radio-Electronics.

A BASIC PATENT covering miniature calculators having their main electronic circuitry in a single chip has been issued to Texas Instruments, Inc. The model is shown holding (at left) the world’s first mini-calculator that contained the equivalent of thousands of discrete devices. It was the first mini-calculator at the time to have the high degree of computational power found only in large machines. The 1974 version (still smaller) is the one at the right.

Paul G. Lecoy, Sandusky, OH, a service dealer who during his life had been active in many Ohio trade asssociation activities. He had served as an officer of both NATESA and NEA.

Vincent J. Lutz, CET, St. Louis, MO. now 69 years old, Mr. Lutz has been in electronics 44 years, and has long been active in both state and national service technician’s organizations. He is now the publisher of the Electronics Industry Yearbook and Director of Special Events for NESDA.

Featured speaker at the Hall of Fame banquet was the US Congressman from Hawaii, Hon. Spark Matsunga.

Winner of this months 1974 Hugo Gernsback Scholarship Award, a prize of $125 granted annually to the most deserving student in each of eight leading home-study electronics schools, is James Michael Kupchik, of Louisville, KY. A graduate of Valley High School in 1963, he joined the Air Force in 1964, working in guided missiles, and later worked on government contract Autovon Systems.

His contacts with electronics inspired him to refresh his knowledge of that subject. At the same time, he wished to learn something of color television for his own use. Mr. Kupchik therefore enrolled in the GTE Sylvania Home Study Master Color TV Servicing Program in June 1970 and graduated with an equivalent A average in December 1973. He is now working at South Central Bell Telephone Co. on data systems and private line services.

Runner-up and winner of the second award, an RCA WV-529A service special VOM, donated each month by RCA, is Frank Fitzgerald, 44, of the Bronx, NY.

He says: “Being a school bus driver for mentally retarded children presented the time and the opportunity to increase my knowledge of electronics, and I enrolled in the Basic Electronics program. Having completed my course, I feel a great sense of accomplishment. I find it easy to understand, condensed, and to the point. I am looking forward to enrolling in one of the more advanced career courses.”

A computer program designed to assist in detecting typographical errors before they appear in print has been devised by two Bell Labs researchers, Robert Morris and Lorinda L. Cherry.

The manuscript is first typed into a computer, which breaks down each word into all possible two and three-letter segments, then compiles a table showing how often each segment appears in that document. The table varies with each piece of material, since it depends on the kind of words used in the particular manuscript.

The computer then looks up each word in the document and compares its combinations of letters with those in the table. It then assigns a number from 0 to 20 to each word, as an “index of peculiarity,” depending on the relative rarity of the letter combinations.

The “peculiar” words are then displayed on a tube or typed out on a list, with those having the highest peculiarity index at the top. Of course, many perfectly correct words that contain uncommon combinations may appear on the list. (For example, a word with the letter “q” not followed by a “u” would almost certainly be printed. Yet the dictionary shows at least 18 words beginning with “q” with a letter other than “u” following it.) Semantic nonsense or missing lines are also undetectable.

The human proofreader then simply scans the list and corrects the errors, at a great saving of time. In one case, a 20,000-word document was examined by the computer in 3 minutes. The author then needed less than 10 minutes to correct 30 misspellings—23 of them in the first 100 words on the list.

At its first annual convention, held in Kauai, Hawaii, the following awards were made to members who had rendered more than ordinary service to the organization: Man of the Year: Leslie J. Nesvik, former director of education for NESDA, for his work in organizing and conducting business management schools all over the country during the past year.

Outstanding Officer: Charles R. Couch, Jr., CET, President of NESDA, for his industry and government work during the past year.