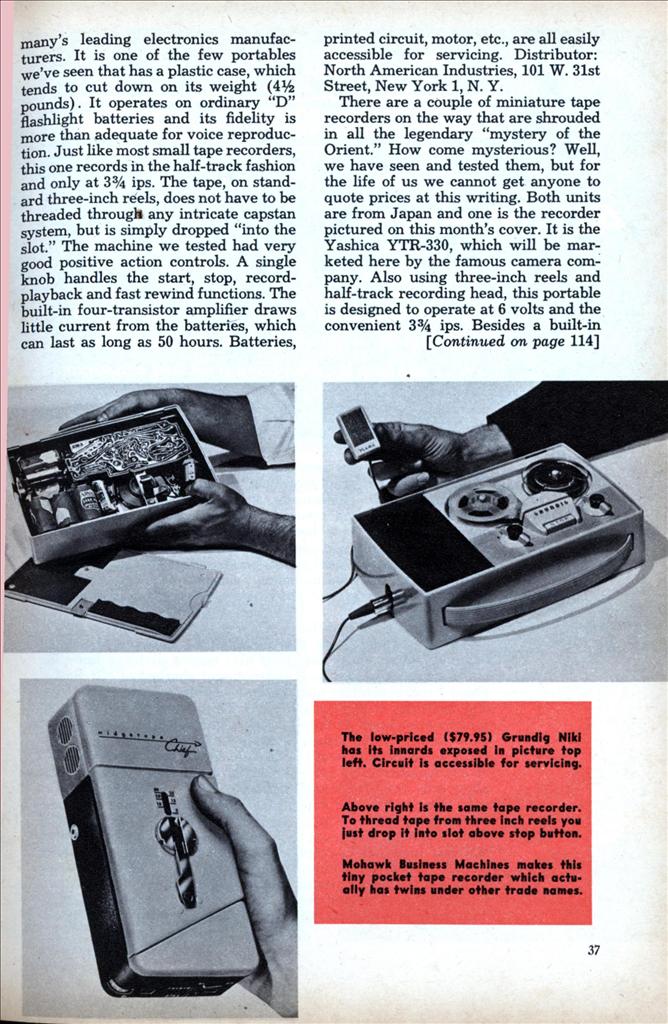 Once there were none, now there are many battery-powered tape recorders at a variety of prices.

A BOUT five years ago you would have had to look mighty hard to find a small, battery-operated tape recorder. Chances are that if you had wanted one badly enough, you would have had it especially made for you at a fancy figure. Today, however, all that is changed. Whether you be in America, Europe, or Asia, you can take your pick of many transistorized recorders—and there are more coming all the time!

The battery-operated tape recorders we’ve seen range from “gimmick” machines that sell for under $30, to professional broadcast quality three-speed instruments that carry price tags close to $1000. While some of these small machines operate only at the 1-7/8 ips speed, other more sophisticated units zip the tape along as fast as 15 ips. Many have a myriad of specially designed accessories that include such items as magnetic telephone pickup coils, extension speakers and remote control switches, while still others don’t even have an electrical fast rewind.

Electronics Illustrated’s survey of this new and exciting field has turned up some very interesting tape recorders, along with the dismaying fact that American companies seem to be avoiding the manufacture of general purpose units, leaving this field almost exclusively (but not quite) in the hands of makers in Japan, West Germany, Switzerland and Austria.

What have the American manufacturers been doing? Twiddling their thumbs? Well, evidently some have, but not all. A few have been working out miniature models for inclusion in guided missile and space rocket systems. Perhaps we’ll hear more about them when present-day military electronic developments finally filter down to you and me on the consumer level.

Other U.S. companies have concentrated on making miniature tape recorders primarily designed for dictation. Among them are units by Dictaphone, Comptometer, Peirce, etc. Of course, these may be used for on-the-spot recording other than dictation, however they usually feature elaborate (hence more expensive) start-stop mechanisms and generally record only at the slowest speed, 1-7/8 ips.

Let’s take a look at some of the battery-operated general purpose tape recorders that can be used anywhere.

The Grundig “Niki” lists for only $79.95 and is made by one of West Germany’s leading electronics manufacturers. It is one of the few portables we’ve seen that has a plastic case, which tends to cut down on its weight (4-1/2 pounds). It operates on ordinary “D” flashlight batteries and its fidelity is more than adequate for voice reproduction. Just like most small tape recorders, this one records in the half-track fashion and only at 3-3/4 ips. The tape, on standard three-inch reels, does not have to be threaded through any intricate capstan system, but is simply dropped “into the slot.” The machine we tested had very good positive action controls. A single knob handles the start, stop, record-playback and fast rewind functions. The built-in four-transistor amplifier draws little current from the batteries, which can last as long as 50 hours. Batteries, printed circuit, motor, etc., are all easily accessible for servicing. Distributor: North American Industries, 101 W. 31st Street, New York 1, N. Y.

There are a couple of miniature tape recorders on the way that are shrouded in all the legendary “mystery of the Orient.” How come mysterious? Well, we have seen and tested them, but for the life of us we cannot get anyone to quote prices at this writing. Both units are from Japan and one is the recorder pictured on this month’s cover. It is the Yashica YTR-330, which will be marketed here by the famous camera company. Also using three-inch reels and half-track recording head, this portable is designed to operate at 6 volts and the convenient 3-3/4 ips. Besides a built-in 2-1/4-inch speaker, there is an output socket for attaching an external speaker. The amplifier has six transistors and the unit has a midget-sized ammeter which indicates recording level and also serves as a check on the condition of the battery. Yashica, Inc. is at 234 Fifth Avenue, New York 1, N. Y.

The Japanese Transi-corder TR 100 also has six transistors, but in addition to being battery-operated (9 volts), it has an AC switch so that it can be used with ordinary house current. There is a remote control switch for AC use. Changing the speed from 1-7/8 ips to 3-3/4 ips is accomplished mechanically by simply sliding off an external capstan sheath, thereby reducing the size of the drive capstan (increasing the speed). A tiny but very sensitive meter monitors the recording level and also can be used to read battery voltage. Accessories to the Transi-corder include a small induction coil designed to be hung over the cradle prongs of your telephone. There is no beeper, as required by law, so we tried it out by recording telephone weather reports. The playback was extraordinarily good. Nippon Sound Equipment Co. makes it; it is distributed by Toyo Menka Company, 2 Broadway, New York, New York.

The American manufacturer, Mohawk Business Machines, makes a tiny tape recorder called the Midge tape 300. Similar machines appear under other names, such as Lafayette’s “Transi-corder” and the “Vanguard Midget.” Depending upon who you buy it from, the price varies from $189.50 to $249.50. The main feature of the Midgetape is its weight: Three pounds. It records only at the 1-7/8 ips speed and uses special cartridge-enclosed reels. It doesn’t have a power rewind nor recording level indicator. There are four transistors in the circuit.

The British-made “Fi-Cord” and the Swiss-made “Stellavox” are very similar. In fact, they were both designed by the same person—Swiss engineer Georges Quellet. The half-track tape- head was engineered to NARTB specifications. While the Stellavox operates only at 7-1/2 ips, the Fi-Cord also provides the 1-7/8 ips speed. Frequency response up to 14,000 cps are claimed for these units. You can record approximately 10 minutes in each direction at 7-1/2 ips. The four 2-volt batteries that power these recorders can be recharged with a small accessory charger. The Fi-Cord is $330 from Kingdom Products, 514 Broadway, New York, N. Y. The Stellavox sells for $399 from Electronics Applications, Inc., 194 Richmond Hill Avenue, Stamford, Conn.

Also available from Electronic Applications is the Nagra III, another Swiss instrument that is the super-duper granddaddy of all small tape recorders. The price is a clue: $945. And they’re not kidding! It has no less than thirty transistors and operates off several types of batteries, or AC.

The “Hi-Delity” trade name appears on two small tape recorders, the model TR401B and the TR-403. The 401B, which lists for $159.50, has a single-lever operation for “play,” “record” and “rewind.” Without a speaker, tapes can be monitored through earphones. An extension speaker costs $24.95. You get 34 minutes of half-track recording time at 3-3/4 ips from this four-tran-sistor job. Ten penlight cells (four for the amplifier and six for the motor) make up the power supply.

The model TR-403 ($199.50) has a built-in speaker, an AC adapter, remote control switch, two speeds (3-3/4 and 1-7/8 ips), and weighs five pounds without leather case. An extension speaker can be plugged in. There are six transistors in the circuit, and all power comes from the same 10 penlight cells as are in the lower priced unit. Both Hi-Delity models are available from Petely Enterprises, Inc., 300 Park Avenue South, New York 10, New York.

The two-speed (1-7/8 and 3-3/4 ips) Steelman “Transitape” weighs eight pounds and handles the standard three-inch tape reels. Equipped with power rewind, it draws its power from 13 Mallory batteries. There are a total of seven transistors in the circuit. List price: $199.50 from Steelman Phonograph & Radio Co., Mount Vernon, N. Y. A telephone pickup is included.

Phono-Trix Mark II and Mark III tape recorders are from West Germany. The Mark II ($79.95) has a sliding switch which controls tape speed from 1-8 ips, while the Mark III ($99.95) is available in either the 3-3/4 ips or 1-7/8 ips speeds. There is a built-in sneaker on both models and both operate from four “D” cell flashlight batteries. A variety of accessories, including an AC adapter, can be had for the Mark III. Matthew Stuart & Company, 353 West 54th Street, New York 19, N. Y., handles these units.