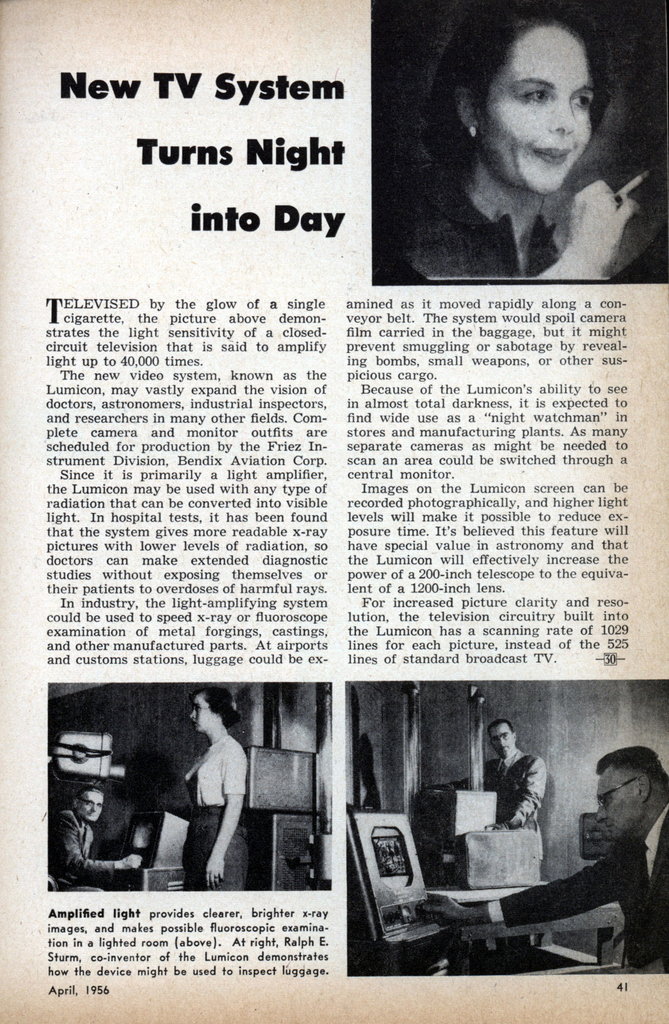 TELEVISED by the glow of a single cigarette, the picture above demonstrates the light sensitivity of a closed-circuit television that is said to amplify light up to 40,000 times.

The new video system, known as the Lumicon, may vastly expand the vision of doctors, astronomers, industrial inspectors, and researchers in many other fields. Complete camera and monitor outfits are scheduled for production by the Friez Instrument Division, Bendix Aviation Corp.

Since it is primarily a light amplifier, the Lumicon may be used with any type of radiation that can be converted into visible light. In hospital tests, it has been found that the system gives more readable x-ray pictures with lower levels of radiation, so doctors can make extended diagnostic studies without exposing themselves or their patients to overdoses of harmful rays.

In industry, the light-amplifying system could be used to speed x-ray or fluoroscope examination of metal forgings, castings, and other manufactured parts. At airports and customs stations, luggage could be examined as it moved rapidly along a conveyor belt. The system would spoil camera film carried in the baggage, but it might prevent smuggling or sabotage by revealing bombs, small weapons, or other suspicious cargo.

Because of the Lumicon’s ability to see in almost total darkness, it is expected to find wide use as a “night watchman” in stores and manufacturing plants. As many separate cameras as might be needed to scan an area could be switched through a central monitor.

Images on the Lumicon screen can be recorded photographically, and higher light levels will make it possible to reduce exposure time. It’s believed this feature will have special value in astronomy and that the Lumicon will effectively increase the power of a 200-inch telescope to the equivalent of a 1200-inch lens.

For increased picture clarity and resolution, the television circuitry built into the Lumicon has a scanning rate of 1029 lines for each picture, instead of the 525 lines of standard broadcast TV.