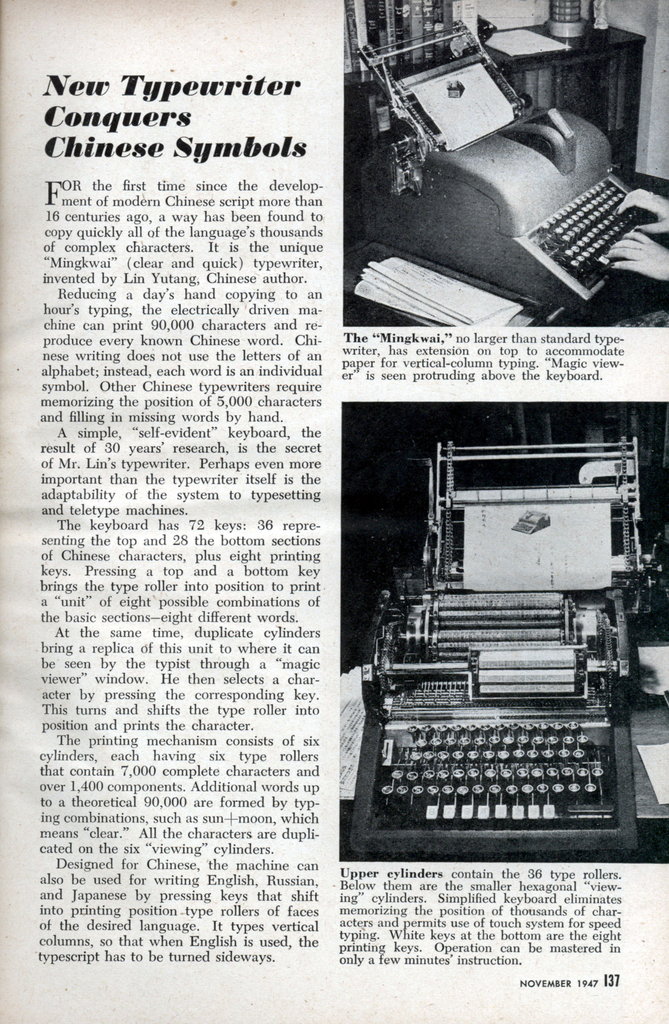 FOR the first time since the development of modern Chinese script more than 16 centuries ago, a way has been found to copy quickly all of the language’s thousands of complex characters. It is the unique “Mingkwai” (clear and quick) typewriter, invented by Lin Yutang, Chinese author.

Reducing a day’s hand copying to an hour’s typing, the electrically driven machine can print 90,000 characters and reproduce every known Chinese word. Chinese writing does not use the letters of an alphabet; instead, each word is an individual symbol. Other Chinese typewriters require memorizing the position of 5,000 characters and filling in missing words by hand.

A simple, “self-evident” keyboard, the result of 30 years’ research, is the secret of Mr. Lin’s typewriter. Perhaps even more important than the typewriter itself is the adaptability of the system to typesetting and teletype machines.

The keyboard has 72 keys: 36 representing the top and 28 the bottom sections of Chinese characters, plus eight printing keys. Pressing a top and a bottom key brings the type roller into position to print a “unit” of eight possible combinations of the basic sectionsâ€”eight different words.

At the same time, duplicate cylinders bring a replica of this unit to where it can be seen by the typist through a “magic viewer” window. He then selects a character by pressing the corresponding key. This turns and shifts the type roller into position and prints the character.

The printing mechanism consists of six cylinders, each having six type rollers that contain 7,000 complete characters and over 1,400 components. Additional words up to a theoretical 90,000 are formed by typing combinations, such as sun+moon, which means “clear.” All the characters are duplicated on the six “viewing” cylinders.

Designed for Chinese, the machine can also be used for writing English, Russian, and Japanese by pressing keys that shift into printing position type rollers of faces of the desired language. It types vertical columns, so that when English is used, the typescript has to be turned sideways.