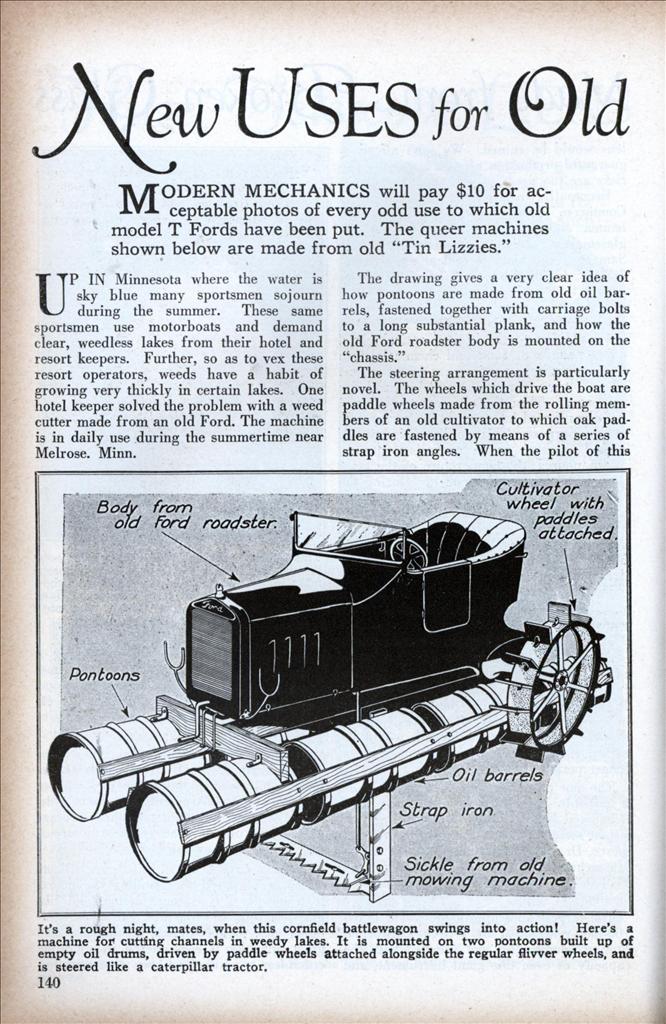 MODERN MECHANICS will pay $10 for acceptable photos of every odd use to which old model T Fords have been put. The queer machines shown below are made from old “Tin Lizzies.”

UP IN Minnesota where the water is sky blue many sportsmen sojourn during the summer. These same sportsmen use motorboats and demand clear, weedless lakes from their hotel and resort keepers. Further, so as to vex these resort operators, weeds have a habit of growing very thickly in certain lakes. One hotel keeper solved the problem with a weed cutter made from an old Ford. The machine is in daily use during the summertime near Melrose. Minn.

The drawing gives a very clear idea of how pontoons are made from old oil barrels, fastened together with carriage bolts to a long substantial plank, and how the old Ford roadster body is mounted on the “chassis.”

The steering arrangement is particularly novel. The wheels which drive the boat are paddle wheels made from the rolling members of an old cultivator to which oak paddles are fastened by means of a series of strap iron angles. When the pilot of this queer cornfield schooner wishes to swing his craft to port or starboard he brakes the opposite wheel. This speeds up the other through the differential, and the craft laboriously makes its change of course.

EVEN an old Ford engine is plenty good enough for use as a rat exterminator. Maybe the motor has a bad piston slap, loose connecting rod, and badly worn bearings, but these little imperfections won’t effect its efficiency a bit when it comes to poisoning prairie dogs, gophers, or other pests which annually cost the farmers of the country millions of dollars through their depredations.

Every automobile owner knows that carbon monoxide is one of the products of combustion in a gasoline engine, and he knows that it is a deadly poison. Carbon monoxide has taken the lives of many unwary motorists who ran their engines in an unventilated garage. An Iowa farmer, con- Below, and driven from an eccentric welded to the propeller shaft is an extended cutter taken from an old mowing machine. This is supposed to wrestle the bulrushes into submission and clear a channel.

Cosidering these facts, wondered why he couldn’t use his old Ford to exterminate a large family of field rats which was making severe inroads into his crops.

He secured a length of rubber tubing, threw a shovel into the back seat of his car, and drove out to his field. It was easy enough discovering the entrance to the animals’ burrows, and a simple task to attach one end of the tubing to the exhaust pipe of his car. The other end he inserted in the tunnel leading to the animal’s under ground home. A shovelful of earth packed the tube into the opening so that it was air tight. Then he started his engine, let it run for a minute or two, and the deed was done.

ON THE banks of the Mississippi at Wabasha, Minn., George McGinty has constructed an odd craft in which he cruises the length of the Mississippi River. The three elements which he used in building the odd craft, which is a most ingenious shallow draft twin screw boat, are: one Ford automobile intact, one old sailboat hull, and one summer cottage. Mounted like the pilot house of an old river stern wheeler, is the cab of a Ford light delivery truck. Behind this is the house which covers the living quarters of the eccentric McGinty, who whiles away his time puttering up and down the river with a self built radio control which he is fitting to his novel houseboat home.

The drawing shows the mechanical ingenuity of the use to which the old Ford power plant was put. The cab of the truck forms the pilot house of this odd craft. By simply stripping off the axle and the front wheels and the rear wheels and by mounting the chassis with the differential left on to drive twin screws, as shown in the drawing, the power plant of the boat was complete. The house was installed over the power plant, the deck covered in around this, and with the addition of bunks the queer craft was ready for the deep.

There is a rudder in the center between the two propellers, which are driven off the end of the Ford rear axle from bevel gears installed in place of the regular Ford wheels.

McGinty’s whole boat cost but $173.40. The old Ford was picked up in the second hand man’s yard, and like many another faithful old Ford car when a little useful work had been done on it, was ready for another million miles. The sailboat hull had lain in a boatbuilder’s yard at the foot of Lake Pepin for many years, and with a coat of well tempered tar was made waterproof.