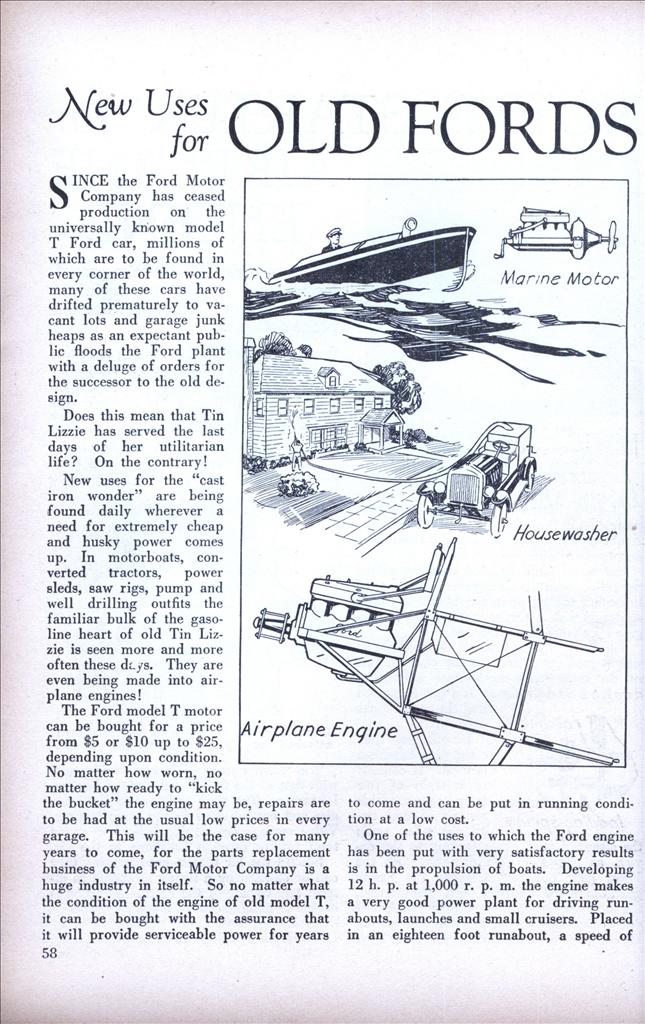 Rescued from a grave in the junk heap, Tin Lizzie dons working clothes and makes money for the ingenious man who thinks of new ways to use her cheap and ample power.

Have you a new use for an old Ford? For all ideas published the editors of Modern Mechanics will pay five dollars—with a bonus for photos. Send in your ideas, giving full details.

SINCE the Ford Motor Company has ceased production on the universally known model T Ford car, millions of which are to be found in every corner of the world, many of these cars have drifted prematurely to vacant lots and garage junk heaps as an expectant public floods the Ford plant with a deluge of orders for the successor to the old design.

Does this mean that Tin Lizzie has served the last days of her utilitarian life? On the contrary!

New uses for the “cast iron wonder” are being found daily wherever a need for extremely cheap and husky power comes up. In motorboats, converted tractors, power sleds, saw rigs, pump and well drilling outfits the familiar bulk of the gasoline heart of old Tin Lizzie is seen more and more often these days. They are even being made into airplane engines!

The Ford model T motor can be bought for a price from $5 or $10 up to $25, depending upon condition.

No matter how worn, no matter how ready to “kick the bucket” the engine may be, repairs are to be had at the usual low prices in every garage. This will be the case for many years to come, for the parts replacement business of the Ford Motor Company is a huge industry in itself. So no matter what the condition of the engine of old model T, it can be bought with the assurance that it will provide serviceable power for years to come and can be put in running condition at a low cost.

One of the uses to which the Ford engine has been put with very satisfactory results is in the propulsion of boats. Developing 12 h. p. at 1,000 r. p. m. the engine makes a very good power plant for driving runabouts, launches and small cruisers. Placed in an eighteen foot runabout, a speed of about eighteen miles an hour is readily obtained turning a 14-inch diameter by 16-inch pitch propeller wheel of three blades. A speed of eight to ten miles has been obtained in a fairly heavy open launch of 25 feet in length using a 16-inch diameter by 16-inch pitch three blade propeller. Boats as large as thirty-five footers have been driven seven to eight miles an hour by the Ford motor hooked to a 16-inch diameter by 14-inch pitch wheel.

As it is a unit power plant, there is very little alteration needed to make a motorboat engine out of the Ford motor. One of the most effective ways of converting the mill from automobile to marine use is to install the motor together with the frame on the usual wooden engine beds such as are built into the boat. The illustration shows this method plainly.

A four-inch Lobee gear pump obtainable from any marine hardware house will fit the crank-saddle bolt to perfection, and a coupling for driving it can be made by drilling the timer housing and running the shaft through on a specially made small timer nut. This cares for the cooling water system.

Fitted with steel wheels, with tractor lugs and an extreme low gear attachment, many an old Tin Elizabeth is now grinding out the last hours of her existence in some truck gardener’s potato patch, doing light work like harrowing, drawing the cultivator, and hauling spray outfits. If the soil is not too heavy these tractors will even do a creditable job of pulling a single bottom with ease.

As a tractor, aside from the changes mentioned, the only additional equipment needed is the belt driven type of pump, needed to circulate the water faster, thus cutting down on oil consumption.

As a saw rig, very little is needed in the way of additional equipment that the local blacksmith cannot make. Many builders of the type of saw outfit shown in the drawing mount their rigs on a wagon, making the tilting table detachable, and the entire outfit is then a portable saw mill which can be taken from place to place to rapidly and profitably convert logs into cordwood.

The bearings shown in the drawing may be ordinary pillow blocks with babbitt bearings. The saw is generally belted to run half again as fast as the engine, or about 1,800-2,100 r. p. m. and can be bought in two foot diameters from most any hardware store. This will give ample saw speed without overloading the engine.

Many men in the wooded farming sections of the northwest make comfortable winter livings with these saw outfits.

One enterprising Eastern schoolboy made a vacuum pump as shown, rigged it on a neat steel wagon, and set about building up a vacuum cleaning service for houses in which he drives up to the curb, runs a large canvas covered tube into the basement of the home, and proceeds to load his wagon with the rubbish in the basement, cleaning up ashes, paper, cans and cobwebs. He tops off the job by thoroughly cleaning the furnace and sweeping the soot from the chimney with the suction! The entire lot of dirt is delivered into an inflated canvas sack just as is seen in a vacuum cleaner. In this case the bag is on a larger scale.

He receives $7 for the service,- which takes half a day. He supervises and directs the vacuum pickup, while the heart of an old Tin Lizzie does the work!

House Washing by Machine Similar in nature is the mounting development by a Chicago man for washing houses. The ordinary house faucet or lawn hose water pressure has not enough force to separate the winter’s grime from the ordinary painted surface, with the consequent result that in the springtime Mr. Average Man tries out the hose, decides the house must be hand washed, and if he is not particularly observing, comes to the final conclusion that to appear neat and trim after a winter of smoke and grime his house must be painted. This costs money, and a man who drives up with a geared force pump, a set of ladders, and a long handled scrubbing brush has no trouble securing the job of washing the house, particularly as the cost of freshening the looks of the home with his method is but $25, whereas new paint entails much muss and fuss and at least an outlay of $75.

With soap, brush and ladders this man quickly wets down the dirt, scrubbing loose the most obstinate deposits from cornice corners, and then, cranking up Elizabeth, he stands off with a pressure hose and rinses the dissolved smudge from the entire home, taking care not to rip up shingles or blow in windows. The paint does not suffer from this treatment, but emerges bright and glossy. Profit is said to be in the neighborhood of $10, over and above the cost of a man’s time and the soap used.

At the rate of two jobs a day a profitable business is easily built up. The idea is just spreading to various cities, and there is little competition except the old fashioned strong arm method.

Other uses that have been found for Ford motors and old chassis have been discovered in profusion on the farm. As shown in the illustrations creditable drilling rigs have been made up from old parts, while the wheels, axles and entire frames have been converted into rubber-tired trailers in which the stock is hauled to market.

Even airplanes have been flown with this motor! When geared by chain to a propeller of the required efficiency, generally 5-1/2 foot pitch and six foot diameter, a static thrust of 275 lbs. can be developed which will fly several planes now being built and for which blueprints are available.

Thus, though new model Fords are appearing in increasing numbers on the highways of the country, new uses for the old reliable Model T Ford engine will continue to be found.