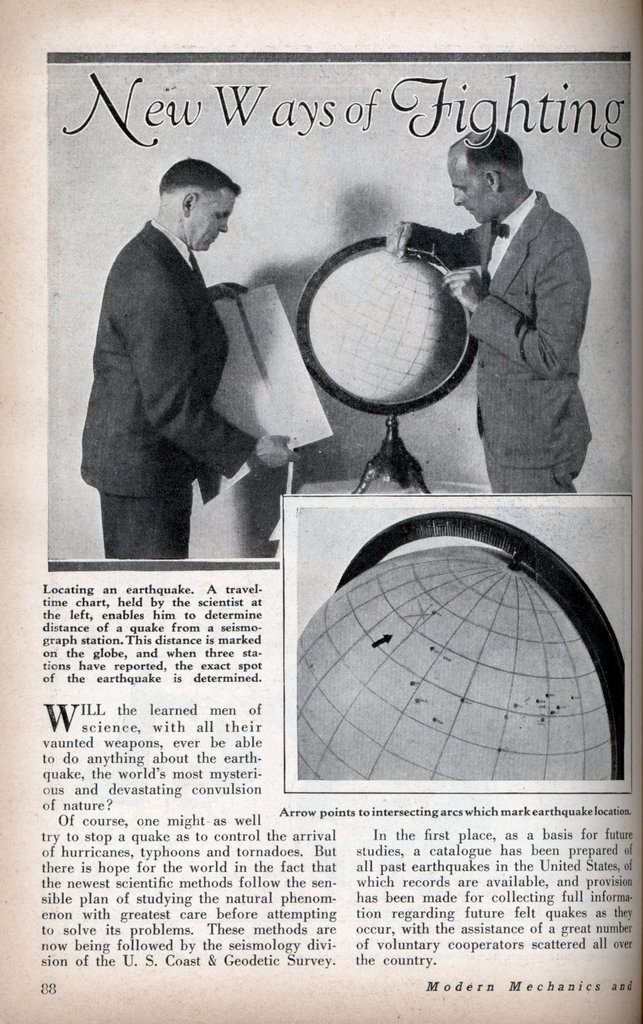 WILL the learned men of science, with all their vaunted weapons, ever be able to do anything about the earthquake, the world’s most mysterious and devastating convulsion of nature?

Of course, one might as well try to stop a quake as to control the arrival of hurricanes, typhoons and tornadoes. But there is hope for the world in the fact that the newest scientific methods follow the sensible plan of studying the natural phenomenon with greatest care before attempting to solve its problems. These methods are now being followed by the seismology division of the U. S. Coast & Geodetic Survey.

In the first place, as a basis for future studies, a catalogue has been prepared of all past earthquakes in the United States, of which records are available, and provision has been made for collecting full information regarding future felt quakes as they occur, with the assistance of a great number of voluntary cooperators scattered all over the country.

In the second place, excellent progress is now being made in providing better instruments and better time control in existing seismological stations and in securing the establishment of new stations, so that the country will be more adequately covered by instrumental records.

It is now pretty generally agreed that the great majority of earthquakes are caused by adjustment of stresses in the earth’s crust. Any transfer of material, as by erosion, from one place to another, decreases the load on the crust at one place, and increases it at the other. No doubt other forces are at work all the time, causing changes in the relative positions of different parts of the crust. As a result of these movements there is a gradual accumulation of stress in the material. When the elastic limit is reached, then a break occurs, one part suddenly slips by another, and elastic vibrations are set up, which are propagated in every direction in various forms of wave motion.

In some cases, as in the California quake of 1906, the break occurs at the surface. Advantage is being taken of this fact to determine, if possible, to what extent stress is accumulating along the famous San Andreas fault, where the major movement occurred in 1906. Suitable movements on opposite sides of the fault have been connected by triangulation and leveling, and this work will be repeated at regular intervals in the future. In this way any change in the relative position of points on opposite sides of the fault either in direction or elevation can be determined.

Japan, scene of such terrific cataclysms of the past, is doing her share in investigation of earth convulsions. Particularly interesting is the work being done in that country in providing for the erection of buildings which may be expected to withstand earthquake shocks. In order that the structural engineer may work effectively in designing buildings to be erected in a region where quakes may be expected, he must have some idea of the movements and forces actually encountered in the central region of the earthquake, the amount of ground movement, vertical, horizontal and rotational, the velocity of motion, the period of vibration, and how these factors are related to the nature of the sub-soil.

Some information on these points can be obtained from the damage done to different types of buildings by an earthquake, but so far no instrumental records of these quantities have been made. Mr. John R. Freeman, a competent observer of earth convulsions, who visited Japan recently, has urged very strongly an investigation along two lines; in the first place, to develop suitable earthquake-recording instruments and install them in a region where a severe earthquake may be expected within a reasonable time, the instruments to be so constructed that they will be put in operation by the earthquake itself; and in the second place, the study of the problem in the laboratory by the use of model structures mounted on a platform to which motions simulating an earthquake may be given.

Another line of investigation to which much attention is being given is the makeup of Mother Earth, her interior, as well as her crust. This study is based on the travel-times of the various types of waves which are set up by an earthquake. But more of this later. Suffice it to say that with more and better instruments the available data is improving rapidly both in quantity and quality.

It is by means of the seismograph that most of our knowledge of earthquake movements is determined. Now the seismograph is rather a mystery. Its ability to detect many earthquakes which cannot be felt, to tell where they occurred, how much the ground moved even if the amount is so small as to be scarcely measurable, is positively uncanny.

As a matter of fact, however, the fundamental principle is simple, being based on certain modifications of the ordinary pendulum. A swinging gate can be considered as a special form of pendulum. Suppose that such a gate swings from two supports and that we have neither friction nor any force acting on the gate except through its supports.

If we substitute for the gate a weight attached to a rod, or boom, we have one type of seismograph. The weight, like the gate, is balanced at a point of rest. The earthquake moves its supports, but owing to inertia, the weight for a time remains in the same position. Actually after a time it starts to move, and this complicates the record and introduces the necessity for damping the motion.

The recording apparatus is essentially a drum revolved by clockwork or by electrical means at a constant speed. Paper is placed on the drum, either smoked paper for visible recording, in which case the record is made by a stylus, or else photographic paper, in which case the record is made by a suitably directed beam of light. The latter method is more accurate since there is no friction in the recording. The former method is more convenient in some respects since the record can be used without development as soon as it is known that an earthquake has occurred. In any case, the seismograph is in continuous operation. A complete installation consists of two horizontal component seismometers which are set at right angles to each other, and a vertical seismometer. There are no installations of the latter instrument at the stations, scattered throughout the country, of the U. S. Coast & Geodetic Survey, since there is at present no apparatus available for the purpose. However, the Bureau of Standards is now at work on the development of a suitable instrument.

At first sight the seismograph, or smoked paper record of an earthquake, seems to be merely a confused series of waves which have little meaning. It has required many years of study by competent investigators to learn their full significance, and there are still many unsolved problems, but the fundamental ideas are not at all difficult to grasp.

Briefly, an earthquake sends out three types of waves. Two of these take the same path, either a straight line through the earth, or else a curved line, not departing very much from a straight line. But the waves travel at different speeds. So one of them gets to the seismogram first and its time of arrival is recorded. Then the other wave arrives, and it also is recorded. The difference in time may range from a few seconds to 20 minutes, but each difference corresponds to a certain distance. For instance, the time difference at Cheltenham, Md., for the earthquake of February 28, 1925, was one minute and 57 seconds, and this corresponds to a distance of 670 miles, which agrees well with the results of other stations.

The third type of wave travels along the surface of the earth at a still slower rate, and its time of arrival also helps to fix the distance. Actually the waves are reflected and are very complicated, but this is a matter which concerns the seismologist only. In practice the times of the different wave phases are obtained from tables or from curves. These vary somewhat ac- cording to the author, but in general the differences are not very considerable. If we know from surface damage the place where earthquakes occurred, then we can use a similar method to get the velocity of the waves from the known distance.

In addition to this laboratory system of studying the quake, the reports of eye witnesses are likewise considered to be important. The work of collecting such reports is well organized by our government.