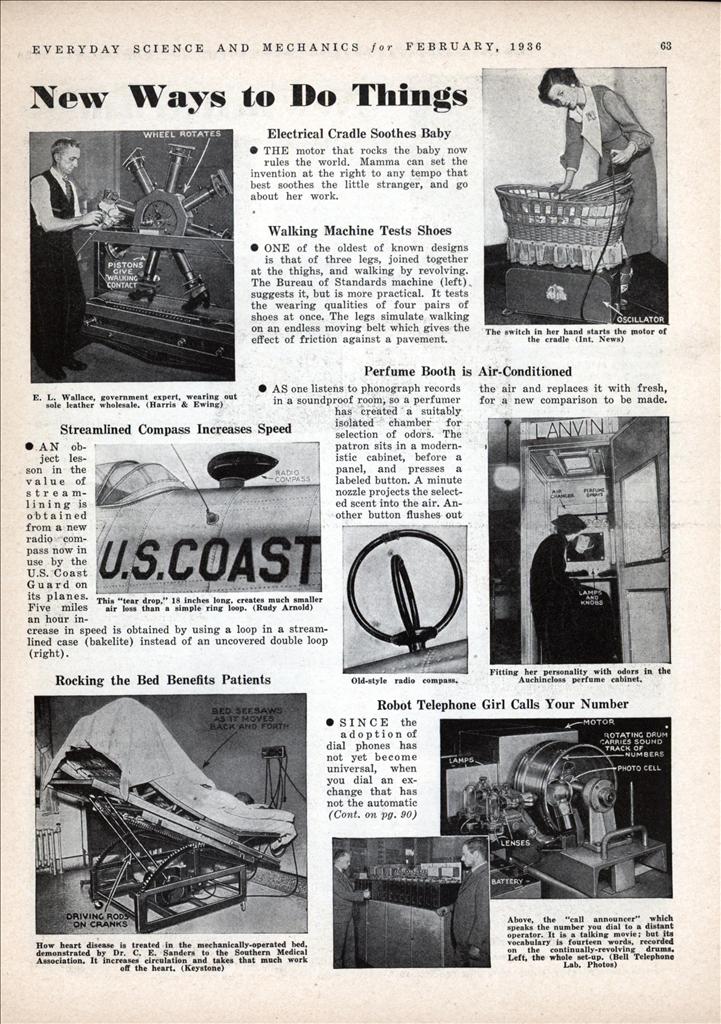 New Ways to Do Things

Electrical Cradle Soothes Baby
THE motor that rocks the baby now rules the world. Mamma can set the invention at the right to any tempo that best soothes the little stranger, and go about her work.

Walking Machine Tests Shoes
ONE of the oldest of known designs is that of three legs, joined together at the thighs, and walking by revolving. The Bureau of Standards machine (left), suggests it, but is more practical. It tests the wearing qualities of four pairs of shoes at once. The legs simulate walking on an endless moving belt which gives the effect of friction against a pavement.

Streamlined Compass Increases Speed
AN object lesson in the value of streamlining is obtained from a new radio compass now in use by the U.S. Coast Guard on its planes. Five miles an hour increase in speed is obtained by using a loop in a streamlined case (bakelite) instead of an uncovered double loop (right).

Rocking the Bed Benefits Patients
How heart disease is treated in the mechanically-operated bed. demonstrated by Dr. C. E. Sanders to the Southern Medical Association. It increases circulation and takes that much work off the heart. (Keystone)

Perfume Booth is Air-Conditioned
AS one listens to phonograph records in a soundproof room, so a perfumer has created a suitably isolated chamber for selection of odors. The patron sits in a modernistic cabinet, before a panel, and presses a labeled button. A minute nozzle projects the selected scent into the air. Another button flushes out the air and replaces it with fresh, for a new comparison to be made.

Robot Telephone Girl Calls Your Number
SINCE the adoption of dial phones has not yet become universal, when you dial an exchange that has not the automatic switching system, a problem thus arises.

It is now necessary to convey your call to a human operator, who has to see or hear it. An early solution was to cause the dialed signal to light up the proper number in a glass plate before the operator, at the “manual” exchange. This, however, required considerable mechanism.

The Bell Laboratories have just brought out a machine which translates your movements of your telephone dial into spoken words, though they are not pronounced by human lips. A revolving drum carries sound tracks, like those on talking motion-picture film; but on them have been recorded only the digits (“one,” “two,” “three,” etc.,) and the letters used in calling a party line.

If you call a manual exchange, no operator handles your call at your own automatically-operated exchange; but when the call is put through (by the first two letters and figure of the call) to the manual exchange, the operator there presses a button, signifying “Ready to take incoming call.” Then the rotating record drum of the “call announcer” starts to speak, and the words are transmitted over the line, as easily as though a live operator were speaking. No special expensive equipment is required at the outlying suburban office, as would be the case if a visual signal had to be transmitted.