Science Illustrated
Issue: May, 1949
Posted in: House and Home
7 Comments on New Wiring Idea May Make the All-Electric House Come True (May, 1949) 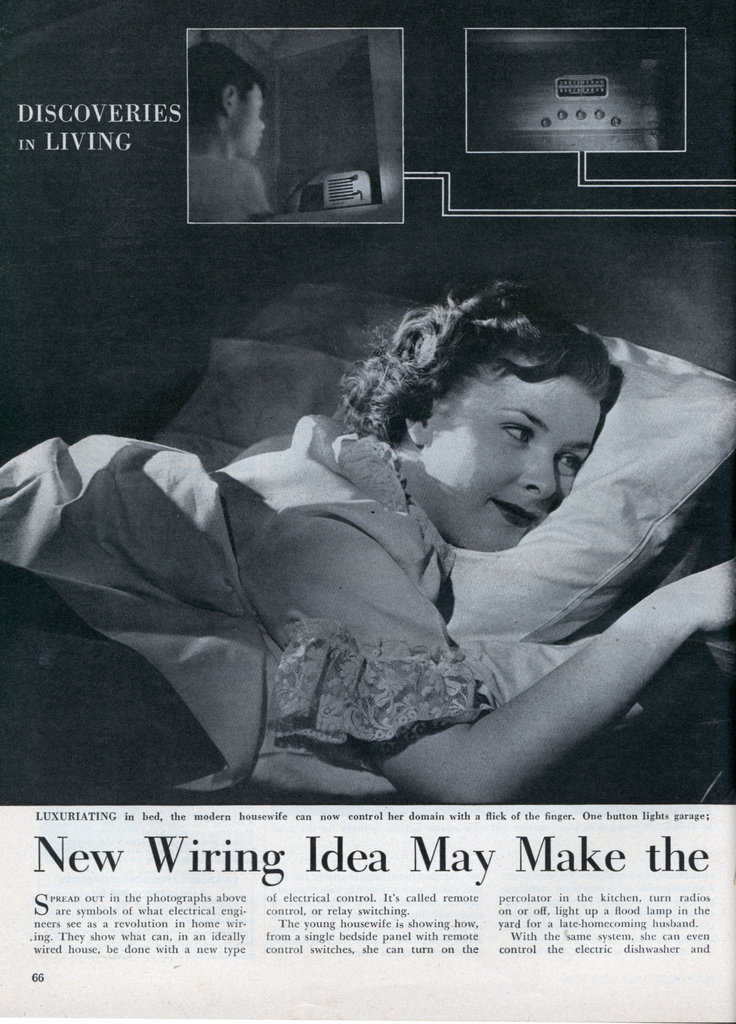 Spread out in the photographs above are symbols of what electrical engineers see as a revolution in home wiring. They show what can, in an ideally wired house, be done with a new type of electrical control. It’s called remote control, or relay switching.

The young housewife is showing how, from a single bedside panel with remote control switches, she can turn on the percolator in the kitchen, turn radios on or off, light up a flood lamp in the yard for a late-homecoming husband.

With the same system, she can even control the electric dishwasher and toaster. In fact, the new system makes it possible to control every light and electrical outlet in and around a house from one single point. Alternatively, it allows a home owner to have a multitude of control points for much-used outlets, providing a new high in the convenient use of household electricity. Best of all, such a system can be installed in a new or old house at only a fraction of what it would cost with conventional wiring. Just what it can mean to home owners, how it works and how much it costs are discussed in detail on the following two pages.

Remote-control system uses light, cheap wire, eliminates fire hazard The principle of remote control, or relay switching, has long been known to electrical engineers who have used it in various commercial and industrial plants. But only in recent months has it been applied to home wiring. The equipment is now made by three companies: Touch-Plate, Square D, and General Electric. This year more than 10,000 homes, mostly on the Pacific Coast, will be fitted with remote-control systems, and the idea is rapidly becoming popular in other parts of the United States.

The heart of a remote-control home wiring installation is a midget electrical relay, shown above on next page. This relay, installed in the junction box at any electrical outlet, does the actual job of turning the current at the outlet on and off. The relay in turn is operated by a small, neat wall switch that controls 24-volt power from a transformer similar to the kind often used for supplying current to doorbells and also to furnace thermostats.

The immediate question that comes to mind, unless you’re an electrical engineer, is, “Why is 24 volts better than 110.?” The answer to that also shows how a remote control system can do more for the money.

According to the National Electrical Code, 110-volt house wiring must be done with heavy, metal-sheathed cable, known to electricians as BX cable, or simply BX (upper wire in photograph above). This is because a short circuit in a 110-volt house circuit can cause sparks that can easily set your house on fire. So the wires carrying this current must be protected against anything that could damage their insulation and cause two conductors to come together and cause a short circuit.

However, if you reduce the voltage to 25 or below, and provide some method of preventing too much current from flowing through the wires, a short circuit will do no more damage than putting the circuit out of commission. All of tin three systems discussed lure operate on 24 volts and are limited to three amperes or less of current, so they are perfectly safe. Because there is no fire hazard, much smaller, cheaper wire (also shown above) can be used to carry this 24-volt power. Another important element is that the chances of getting 110 volts of house current through your body, with possibly fatal results, can be eliminated. Twenty-four volts at low amperage won’t do you any harm.

A Comparison Let’s compare a conventional wiring job with a specific remote control job, to see what are the important differences between the two.

Suppose your garage is a long distance from the back door of your house, and you have a floodlight outside the back door to light the path. For convenience you should be able to turn this light on or off from either the garage or the house. If you use a 110-volt circuit for this set-up, and no relays, it means you must run wires in expensive BX cable from the house all the way to the garage and back again. But with relay switching, the BX stops at the light socket. The cable to the garage is inexpensive two or three conductor, small-gauge wire.

Of course, for just one installation, such as described above, you would save money by sticking to the standard 110-volt system, because you would have to buy a transformer to operate your low-voltage control circuit. But one transformer will handle all the control circuits needed in an average house, so this cost (about $5) when applied against the saving in having most of your house wired with 24-volt wires, instead of BX, is insignificant.

You can’t get away from BX altogether because, as noted above, it must still run from your fuse box to each outlet in the house. But it stops there. All circuits from outlets to switches can be made with the low-cost 24-volt wire.

Naturally, this results in a saving where a house is wired for utmost convenience. Therein lies the real value of remote control. It provides a means of getting the maximum ease and comfort out of the wiring in your home.

Even the manufacturers of the remote control systems, however, don’t claim that they should be used everywhere. In building a house where economy is the paramount factor, for example, it would be cheaper to use conventional wiring, and have only one, or at most two switches for each outlet, and to have these switches located as close as possible to the outlets.

What are the differences between the three systems now available? Biggest difference is between Touch-Plate and the two others. Touch-Plate uses a pushbutton type of switch—one push turns a light on, the next turns it off. This means that if your switch controls a light you can’t see—such as a basement light controlled from an upstairs hallway—you may not know whether a push on the switch is turning the light on or off. Both GE and Square D use two-position switches, marked to indicate which position turns the light on and which turns it off.

Slight Difference Beyond that all three systems differ only in minor details such as methods of mounting relays or connecting them to leads in various circuits.

* Because of the low voltage, home owners who want to do some wiring on their own and who know the principles can install remote control systems in houses already wired for 110 volts without violating most insurance or local building codes. However, experienced electricians point out that it is not as simple as it sounds. The difficulties of working with low voltage come from the fact that “trouble shooting” is more complicated, and any system that gets out of order, or is improperly wired in the first place, may prove a real headache, even to a practiced electrician.