The false ears for the deaf on the second page are the definite winner in this group. 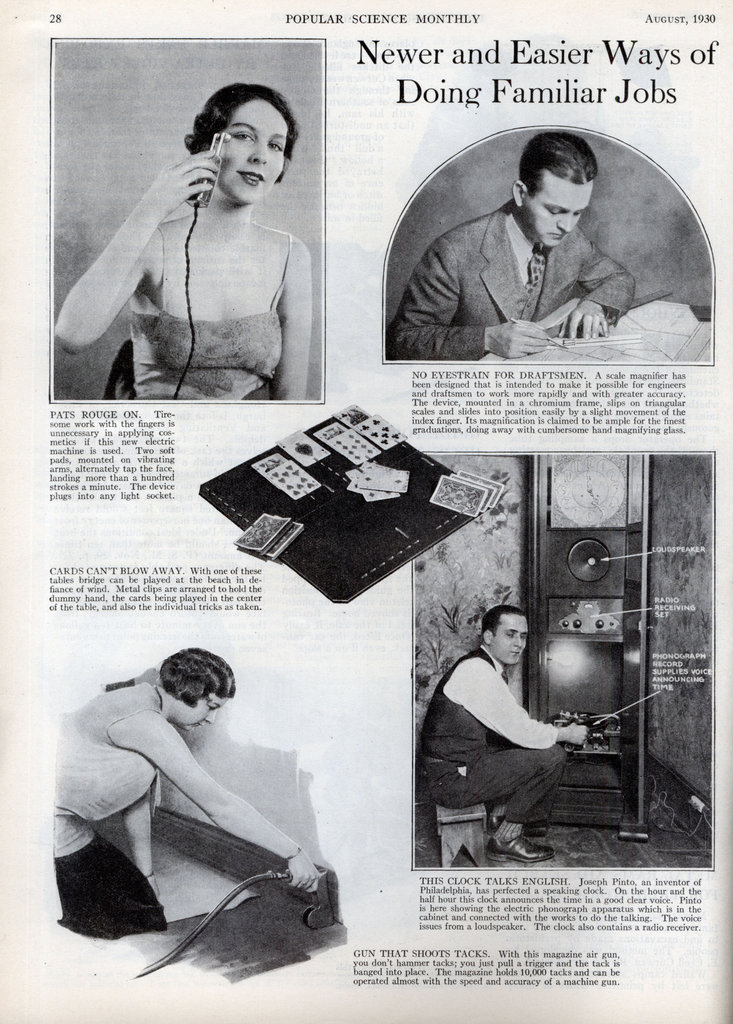 PATS ROUGE ON. Tiresome work with the fingers is unnecessary in applying cosmetics if this new electric machine is used. Two soft pads, mounted on vibrating arms, alternately tap the face, landing more than a hundred strokes a minute. The device plugs into any light socket.

CARDS CAN’T BLOW AWAY. With one of these tables bridge can be played at the beach in defiance of wind. Metal clips are arranged to hold the dummy hand, the cards being played in the center of the table, and also the individual tricks as taken.

NO EYESTRAIN FOR DRAFTSMEN. A scale magnifier has been designed that is intended to make it possible for engineers and draftsmen to work more rapidly and with greater accuracy. The device, mounted in a chromium frame, slips on triangular scales and slides into position easily by a slight movement of the index finger. Its magnification is claimed to be ample for the finest graduations, doing away with cumbersome hand magnifying glass.

THIS CLOCK TALKS ENGLISH. Joseph Pinto, an inventor of Philadelphia, has perfected a speaking clock. On the hour and the half hour this clock announces the time in a good clear voice. Pinto is here showing the electric phonograph apparatus which is in the cabinet and connected with the works to do the talking. The voice issues from a loudspeaker. The clock also contains a radio receiver.

GUN THAT SHOOTS TACKS. With this magazine air gun, you don’t hammer tacks; you just pull a trigger and the tack is banged into place. The magazine holds 10,000 tacks and can be operated almost with the speed and accuracy of a machine gun.

MACHINE HANDLES MOVIE FILM. A movie film in process of development both stretches and shrinks as it goes from one stage to another. Holding it uniformly taut was in the past a difficult job for the dark room men. Now a machine does the trick with the help of a small electric motor. The new device, which looks like a large rack, is the invention of Ray W. Scott, of Los Angeles. The picture shows the rack, with film on it, being plugged into an electric light socket.

SILENT VACUUM CLEANER. Making the regular water system clean the home is the main idea back of an invention made by a Los Angeles man. The apparatus taps a water pipe, and this creates in the cleaner a vacuum that sucks out the dirt. All the dust goes directly through the short hose and is carried to the sewage pipes. The machine works silently and uses no electric power. At right is shown manner of attaching the hydraulic cleaner to the water system. Plugs arc put in throughout the home, making it possible to use the cleaner in each room.

HOME MOVIE CABINET. Projector, camera, and cans of films are all stored in this attractive chest when not in use. The cabinet, when closed, forms an ornamental piece of furniture and can be used as a serving table. Its chief advantage lies in the fact that it is always at hand and the living room can be converted into a movie theater in the wink of an eye.

WILL IT TAME WILD PITCHER? More than one ball game has been tossed away by a pitcher whose control went blooie. Therefore astute managers have set up two long canvas bags slung on either side of the home plate and between which the ball, in practice, must be thrown. Al Lopez of Brooklyn demonstrates its use.

FALSE EARS FOR THE DEAF. Persons who are hard of hearing cup the hand behind the ear. This gesture gave a German inventor the idea for his false ears, which are made of light metal and are fitted in place back of the ear, pressing it slightly forward the same way the hand does.