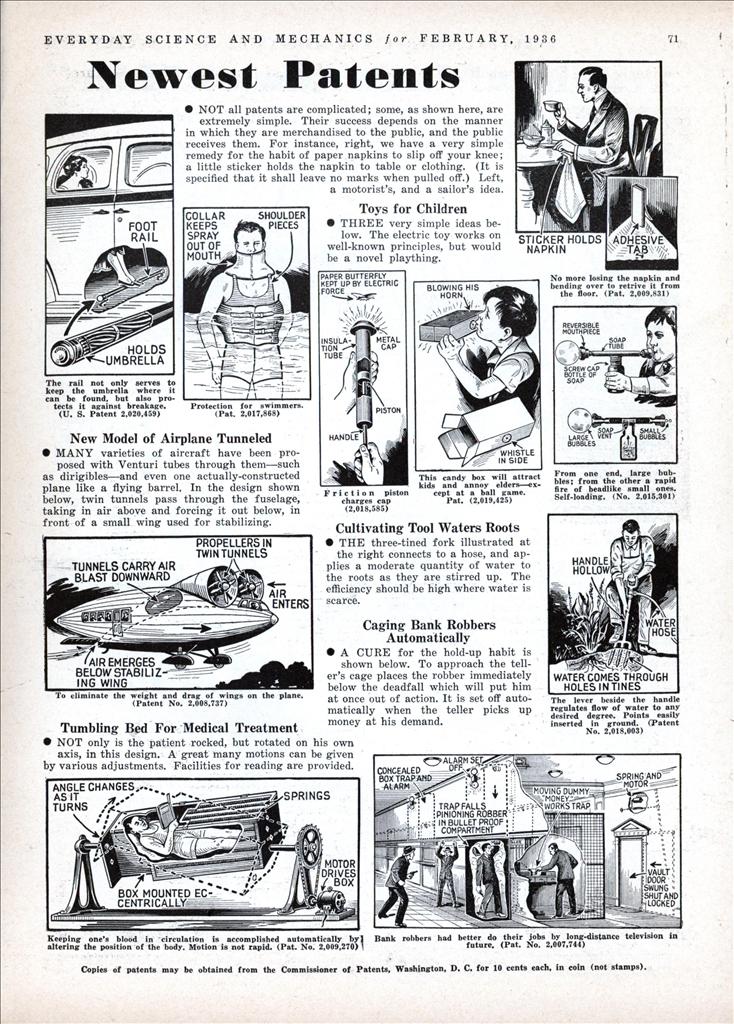 • NOT all patents are complicated; some, as shown here, are extremely simple. Their success depends on the manner in which they are merchandised to the public, and the public receives them. For instance, right, we have a very simple remedy for the habit of paper napkins to slip off your knee; a little sticker holds the napkin to table or clothing. (It is specified that it shall leave no marks when pulled off.) Left, a motorist’s, and a sailor’s idea.

Toys for Children
• THREE very simple ideas below. The electric toy works on well-known principles, but would be a novel plaything.

New Model of Airplane Tunneled
• MANY varieties of aircraft have been proposed with Venturi tubes through them—such as dirigibles—and even one actually-constructed plane like a flying barrel. In the design shown below, twin tunnels pass through the fuselage, taking in air above and forcing it out below, in front of a small wing used for stabilizing.

Tumbling Bed For Medical Treatment
• NOT only is the patient rocked, but rotated on his own axis, in this design. A great many motions can be given by various adjustments. Facilities for reading are provided.

Cultivating Tool Waters Roots
• THE three-tined fork illustrated at the right connects to a hose, and applies a moderate quantity of water to the roots as they are stirred up. The efficiency should be high where water is scarce.

Caging Bank Robbers Automatically
• A CURE for the hold-up habit is shown below. To approach the teller’s cage places the robber immediately below the deadfall which will put him at once out of action. It is set off automatically when the teller picks up money at his demand.