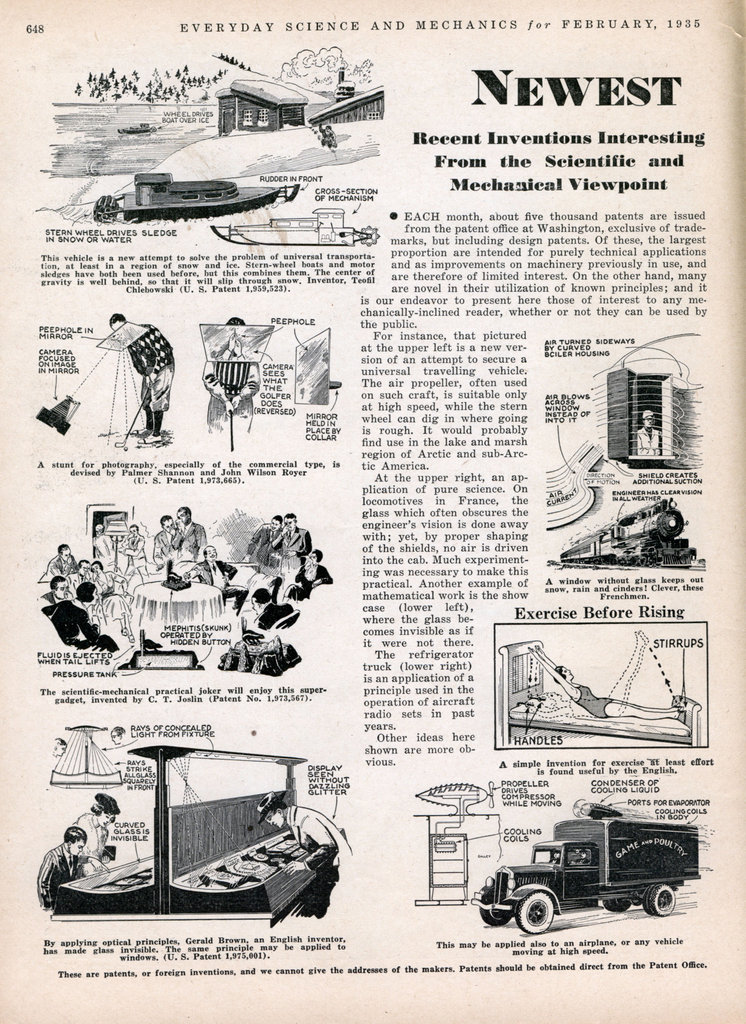 Newest Recent Inventions Interesting From the Scientific and Mechanical Viewpoint

â€¢ EACH month, about five thousand patents are issued from the patent office at Washington, exclusive of trademarks, but including design patents. Of these, the largest proportion are intended for purely technical applications and as improvements on machinery previously in use, and are therefore of limited interest. On the other hand, many are novel in their utilization of known principles; and it is our endeavor to present here those of interest to any mechanically-inclined reader, whether or not they can be used by the public.

For instance, that pictured at the upper left is a new version of an attempt to secure a universal travelling vehicle. The air propeller, often used on such craft, is suitable only at high speed, while the stern wheel can dig in where going is rough. It would probably find use in the lake and marsh region of Arctic and sub-Arctic America.

At the upper right, an application of pure science. On locomotives in France, the glass which often obscures the engineer’s vision is done away with; yet, by proper shaping of the shields, no air is driven into the cab. Much experimenting was necessary to make this practical. Another example of mathematical work is the show case (lower left), where the glass becomes invisible as if it were not there. The refrigerator truck (lower right) is an application of a principle used in the operation of aircraft radio sets in past years.

â€¢ THE patent illustrated at the upper right deals with the problem of an aircraft designed for such high speed that it can hardly be got off the groundâ€”since the take-off speed is very high. But, with a large plane, of the load-carrying type, the high-speed (stratosphere) plane might be lifted from the ground by the slower craft; which then gets up a speed of a hundred, or hundred and fifty miles an hour. The angle of the wings of the upper plane is increased until it is lifting its own weight; the catches holding it are releasedâ€”and the speed plane soars away on its own. The booster plane returns to ground, perhaps for another plane; and so on. Having used up its loadâ€”perhaps dropped it in the form of bombsâ€”the speed plane may be able to descend at a practical landing speedâ€”or it might even be picked up in the air by the slower plane and lowered to ground.

The photoelectric signalling system shown below may seem complicated; but has been applied in Europe, and has the support of traffic authorities. As the diagram makes clear, the driver of an overtaking car can make clear his desire to pass, by an unmistakable signal; and the driver of the car ahead indicates that the way is clear. It may become as standard as the present “Stop” light.

The parking meter shown is the invention of the well-known economist, Roger W. Babson. The patent contemplates, first, a lighting system to show when parking time is up; second, a coin-box meter whereby parking privileges may be obtained at public grounds on a pay-in-advance basis.

Below, we have a device which has already been in use in foreign countries for those desiring local application of sunlight. Lower left corner, an invention based on the theory that infra-red radiation is reflected from platinum in the form of longer, visible light rays.